Amid the rising insecurity that has enveloped the Southeast Region, the clergy and residents of Awka are raising concerns over the Anambra State Governor’s directive for the blocking of the stretch of road between the State Criminal Investigation Department (CID), and the State Correctional Facility (Prisons), Awka. The blockage of that section of road has forced people, both young and old, to walk the long distance from the CID end to the Correctional Centre.

Fides reports that the stretch of road between the CID and the former Prisons has been barricaded, making it impossible for vehicles to ply there anymore. This has also affected the businesses there, including a filling station located opposite the State Police Command.

The blocked road equally leads to major markets in the state like Eke-Awka, Eke-Nibo and Eke-Amawbia.

Many security officials have been mowed down by gunmen who also attacked police facilities in the Southeast Zone within the last couple of months, thus heightening the tension. 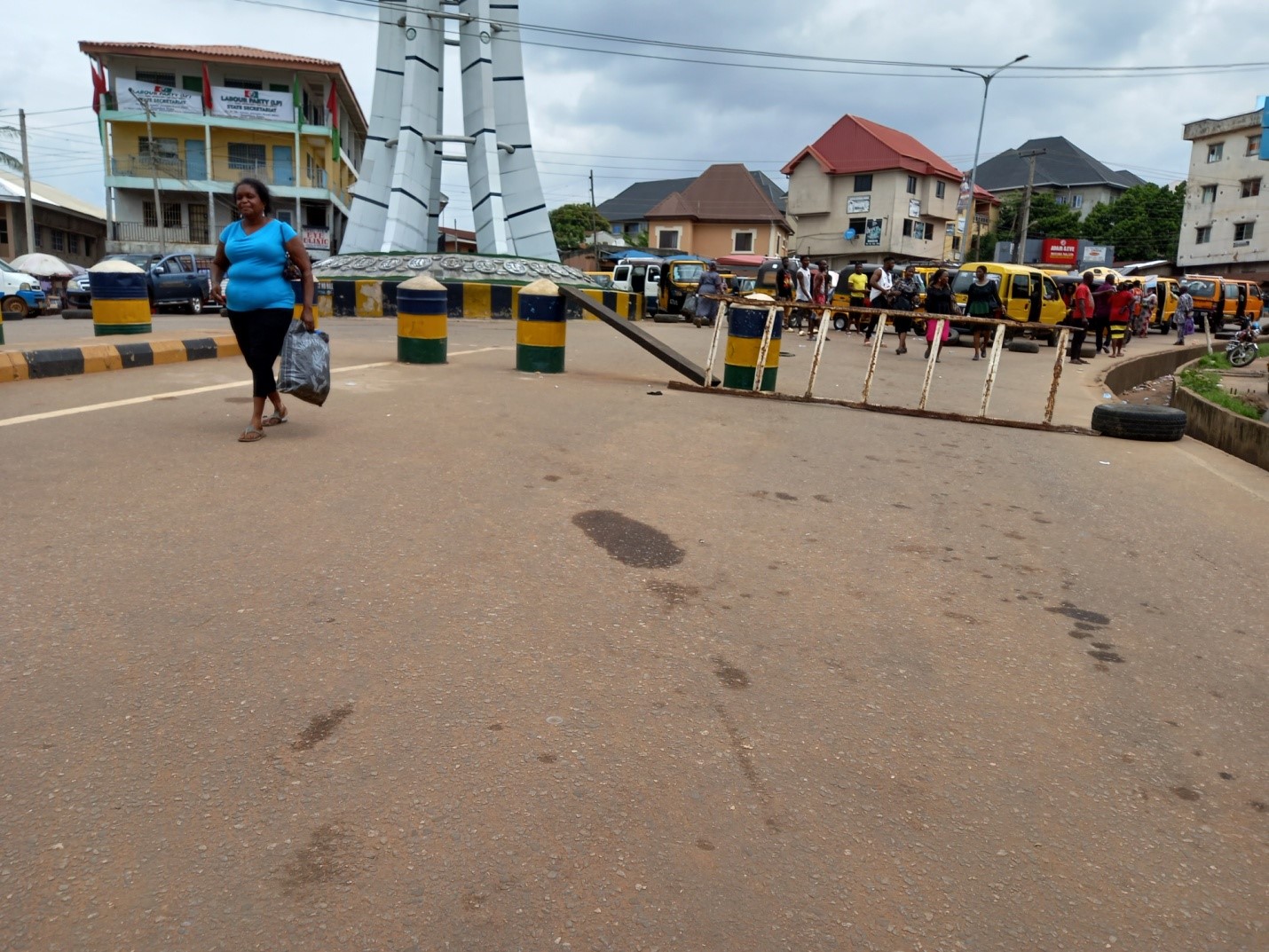 The blocked road at the Amawbia Roundabout end of Awka

Reacting to this development, the Auxiliary Bishop of the Catholic Diocese of Awka, Most Revd Jonas-Benson Okoye, who raised fresh worries over the governor’s directive last Tuesday, May 18, condemned the closure of the road, noting that people who did business around that axis no longer did so.

Bishop Okoye disclosed this during an interview with Fides at his office at St. Patrick’s Cathedral, Awka.

‘I feel the pain and agony of the people, this hardship is just unbearable, the government must beef up security and reopen the roads with immediate effect,’ His Lordship said.Insisting that he felt the pains of the people, the Catholic prelate however expressed happiness with the manner the State Government had been treating matters affecting the people.

The Auxiliary Bishop of Awka, who seemed concerned about the plight of the people, said he was more saddened by the attacks on public institutions like police stations, and recently the INEC offices in the Southeast states by bandits (unknown gunmen).

He said, ‘The attacks on the security apparatuses and their officers are unacceptable, but then closing those roads tends to worsen the whole matter as the people will continue to panic.

‘Our people are in great pain and difficulty. When you get to Amawbia Round About from St. Matthew’s Catholic Church, you will see thousands of commuters trekking down the road. People who live at Nibo and those at Trig-Point Hotel are no longer in business. You don’t need any soothsayer to tell you the pain and agony those people are going through.

‘All these things are shut down because of the police station there. If they had been envisaging this all these years, by now they would have relocated. I understand the argument because we have a prison yard on that road but we must also consider the pain this consequence is inflicting on the people.

Reacting, Chris Owolabi, Commissioner of Police, Anambra State Police Command, told Fides on the telephone that the development would remain till the security situation in the state improved.’We are aware of the pain and hardship this development is causing Ndi Anambra but we must all understand that the measure was carried out to subdue security tensions in the state,’ Owolabi disclosed.

Following a harrowing experience she encountered, while trekking the route, a pregnant mother, Mrs. Juliana Emeka, quipped, ‘Nonsense! What is even their aim? They should open the road and allow poor people who ply the road access to the market; there’s no point blocking the road other than showing us that they have power.

‘Imagine a pregnant woman having to trek that distance from Amawbia to Eke-Awka. Leadership is not about being in charge, it is about taking care of those in your charge,’ she lamented.

Also expressing worries, Paschal Chukwunweike complained about the blockage in a comment on Fides Facebook page. ‘Fides Media, I want to first thank you guys for bringing up this issue, though it’s been long the Anambra State Government blocked the road, it’s the duty of the Media/Journalists to bring the plight of the people to the Government. Whoever it is that advised the Government of Anambra State that the solution to their fear of the unknown gunmen’s attacks was to block the Amawbia-Eke Awka Road is a compound fool. Consequently, this action of the government has caused unnecessary discomfort/constraint to the poor masses.

‘Even the Nigeria Police who stay there, as I witnessed on a fateful Sunday evening, maltreated some youths who were around there. The alternative routes from Amawbia to Eke Awka are in a very bad state, causing traffic jam.

‘I will advise the Government of Anambra State, since they are afraid of the unknown gunmen, that rather than block the Amawbia Roundabout, they should mount heavy security check points along four other roads leading to the Amawbia Junction,’ he said.

Lamenting why such orders had not been given in spite of their business, which, she said, was their only source of income, Miss Lydia  Nnamdi, spokesperson of Ifenna Petroleum Limited, said it was disheartening that the closure of the roads order was carried without the consideration of people, particularly those in business.

Miss Nnamdi said that security was everyone’s concern but shutting down businesses was more disastrous than those she called unknown bandits.

‘Before now, we sold averagely 500, 000 thousand Naira on a daily basis, but  with this ugly development we cannot even sell 50, 000 in two days because no car or keke is allowed to pass through this route again,’ she said.