Protest by Nkerehi Women, against the Law

A lawyer,  Mr Gozie Okafor, has described the recent protest by some women from Nkerehi Community against a prominent son of Umuchukwu, Dr Godwin Maduka, as a breach of the law. Umuchukwu is in Orumba South LGA of Amanbra State.

Speaking with Fides in Awka, Okafor, while conceding that the country’s constitution recognized people’s freedom to protest, as enshrined in Section 40 of the 1999 Constitution, said that freedom was however not absolute.

His words, ‘Democracy thrives on deliberating, arguing and dissent. However, like every other human right, the right to protest or freedom of assembly is not absolute. It has its limitations and when the bounds of the law are breached, it can be said to be illegal.’

The women, Fides recalls, protested against what they termed the high handedness and authoritarian attitude of Maduka who is a governorship aspirant on the platform of the People’s Democratic Party, PDP.

They alleged that Maduka single handedly changed their community from Nkerehi to Umuchukwu without consultations, as well as harassing and intimidating those opposed to the change of name. 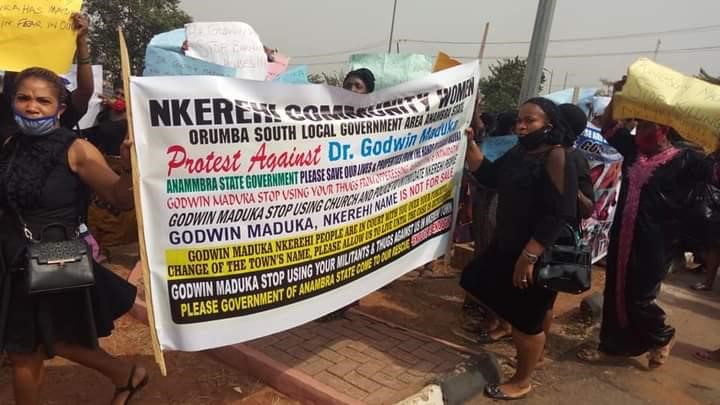 A section of Nkerehi women at their recent protest at Govt House, Awka

But Okafor, while reviewing the protest, said the women overstepped their limits in law and recalled how the former President General of the community, had, according to him, due to popular demand and in order to avoid controversies and unnecessary bickering, applied to the then Government of Anambra State under Mr Peter Obi, for a referendum on the name change.

He said that when the then government approved their application, some elements challenged it in court but lost at both the high court and appellate court, with the Court of Appeal in Suit No CA/E/162/08, upholding the decision of the lower court, stating that the first respondent, Mr Dubem Obaze, as the representative of the executive arm of the Anambra State Government, had the authority to conduct a referendum in Nkerehi after which the outcome would be forwarded to the State House of Assembly for necessary action.

Okafor said the State Government had since gone ahead in obedience to the pronouncement of the Court of Appeal to conduct a referendum on the name change ‘devoid of manipulation or deceit and majority voted for Umuchukwu, while the state government, acting in accordance with the wishes of the community, had through the instrumentality of the state assembly, gazzetted the name change.

‘The judiciary as an institution is the final arbiter of the limits of the rights and duties of the rulers and the ruled. Upholding and obeying a judgement of the court is a sacred obligation which the law expects of every party before it. Failure to do so amounts to a direct insult or resisting the powers of the Judges,’ Okafor said, describing the protest by Nkerehi women, therefore, as contemptuous of the court.

‘The Nigerian jurisprudence is replete with cases where the courts frowned at such attitudes by litigants. It affects the dignity of the courts and the administration of Justice. It embarrasses and desecrates the sacred honour and integrity of the court and the judicial process.

If such actions are countenanced and left unchecked, it will create an odious precedent which every party can utilize to interfere with and or jeopardize the powers of the courts. That is a perfect recipe for anarchy, uncertainty and confusion in society,’ Okafor averred.

He therefore called on the Anambra State Government to be mindful of entertaining ‘frivolous grievances from parties who hide under the banner of dissent to sow discord for their selfish political ends,’ warning that with the situation of things in many communities, which, he said, had made the traditional institution over politicized, the traditional institution would soon lose its relevance.