The Catholic Bishop of Awka Diocese, Most Rev Paulinus Ezeokafor, has called on parents to pay proper attention to the spiritual formation of their children, lest they jeopardize the future of their children.

Bishop Ezeokafor, who gave the warning in his homily of the concelebrated Holy Mass to mark the 25 Years Anniversary of St Mary’s Parish, Ifitedunu, Dunukofia LGA, Anambra State, last Sunday, said there was need for proper attention to be paid to both the human and spiritual nature of every individual while in the process of formation. 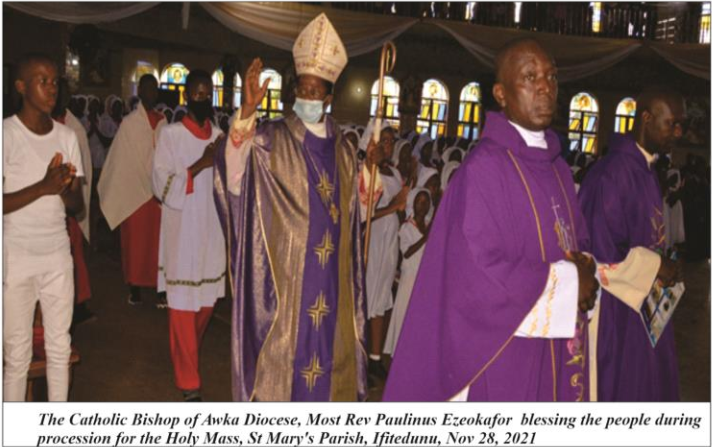 He berated parents, who, according to him, focused only on training their children to be successful professionals in society while they neglected their spiritual growth, insisting that money was not everything.

The bishop observed that lack of proper attention to spiritual formation of the children led to what he termed the increased culture of neo-paganism among young people in some towns. He regretted that such had jeopardized humanity.

Citing the Onwa Asaa Festival of Ifitedunu, which findings revealed that some Christians engaged in the event which was said to be fetish, the Catholic prelate advised Christians against neo-paganism and warned that the mixture of Christian and pagan religion destroyed humanity.

‘Lack of proper attention to spiritual formation of the children often gives rise to a failed future and failed society. Parents should make out time for their children; teaching them catechesis, prayers and Catholic doctrine. Parents should lay a good foundation for their children in their formative stages of primary and secondary school levels so as to enable them to toe the right part,’ Bishop Ezeokafor stated.

The Catholic prelate, who also stressed the importance of vocation education, urged students to take up skills so as to be self-reliant and develop themselves positively.

He called on the government at all levels to do their part and create job opportunities for the young ones so as to get them occupied positively and stay away from vices.

The bishop explained that when the youths were engaged in work and skills, they would stay away from thuggery and paganism.