The restriction of private Masses in the upper side chapels of St. Peter’s Basilica went into force Monday.

The basilica was quiet on March 22 without the usual murmur of prayers in many languages being offered to God in the sacrifice of the Mass at the tombs of saints.

A person entering the basilica at 8:30 a.m. would not have seen any Masses taking place in the empty side chapels.

The only official Mass scheduled at that time occurred out of sight behind a curtain behind a barricade. Only eight people were present at the Mass offered in Italian by one priest ad orientem (facing liturgical east) without any hymns. 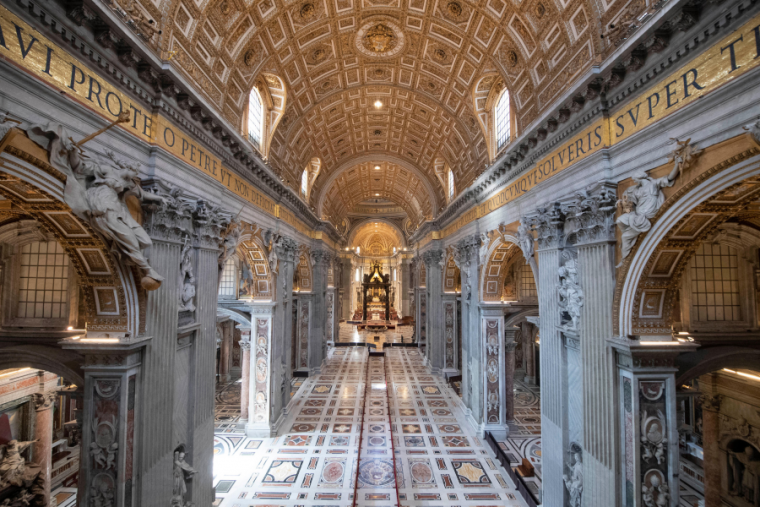 The basilica appeared more like a silent museum where the art above the altars can be viewed, but the altars themselves are left unused for their intended purpose.

Security guards chatted and watched as maintenance workers ascended on an aerial lift above the bronze statue of the apostle St. Peter, the first pope, to whom the basilica is dedicated.

Until now, the 45 altars and 11 chapels in St. Peter’s Basilica have been used every morning by priests to celebrate their daily Mass. Many of them are Vatican officials who begin their day with the celebration.

At 8:15 a.m. on March 18, four days before the suppression of private Masses in the upper basilica went into effect, a Mass could be seen taking place at nearly every chapel in the upper basilica and more Masses were offered below in the crypt chapels surrounding the archaeological excavation of the tomb containing relics of St. Peter.

The restriction of private Masses in the upper part of St. Peter’s Basilica came about in an unusual fashion 10 days ago.

A letter from the Vatican Secretariat of State was posted to the sacristy door in St. Peter’s Basilica on March 12. The letter was not accompanied by any kind of official Vatican communication. Nor was the letter signed in full by Archbishop Edgar Peña Parra, who heads the First Section of the Secretariat of State, but only included his initials.

The letter from the Secretariat of State was not addressed to Cardinal Mauro Gambetti — the new archpriest of St. Peter’s Basilica, appointed by Pope Francis on Feb. 20 — but to Archbishop Mario Giordana, extraordinary commissioner of the Fabric of St. Peter.

This is unusual, since the Fabric of St. Peter does not deal with liturgical celebrations in the Basilica, but is instead charged with its conservation and maintenance.

The letter’s release by the First Section of the Secretariat of State has also garnered attention, as the first section is a sort of ministry of internal affairs, in charge of the direction and coordination of offices of the Roman Curia, but typically not liturgical celebrations.

These anomalies prompted speculation that the letter might have been a forgery. But two Vatican officials who asked for anonymity confirmed to CNA on March 12 that the document was real and its directives would be enforced beginning March 22, as the letter instructed.

The letter stressed that Lent is a time to focus on the Word of God and the celebration of the Eucharist. It said that the changes were intended to ensure “the Holy Masses in St. Peter’s Basilica take place in a climate of recollection and liturgical decency.”

Under the new measures, all priests will be able to concelebrate in the official scheduled Masses. The measures also ask that the Masses have lectors and cantors.

On the feast day of a saint whose relics are in the basilica, such as the altar at the tomb of St. John Paul II, one of the Masses can be celebrated at the altar dedicated to that saint.

Another change: Mass offered in the Extraordinary Form of the Roman Rite will be limited to the Clementine Chapel in the Vatican Grotto.

Pope Francis has often said that the Catholic faith is not a thing of the past, like an artifact in a museum, but rather is kept alive through continuous personal encounters with Christ.

“There is always a danger that can dim the light of faith, and that is the temptation to reduce it to something from the past, something important but belonging to another age, as if the faith were a beautiful illuminated book to be kept in a museum,” the pope said in a homily on June 25, 2016.

“Once it is locked up in the archives of history, faith loses its power to transform, its living beauty, its positive openness to all,” the pope said.