While there might still be people who see priesthood as something less than a divine vocation, the vicar of Our Lady of Fatima Catholic Parish, Igboukwu, Rev Fr John Nwankwor, has described priests as ambassadors of God in the Church and society at large. 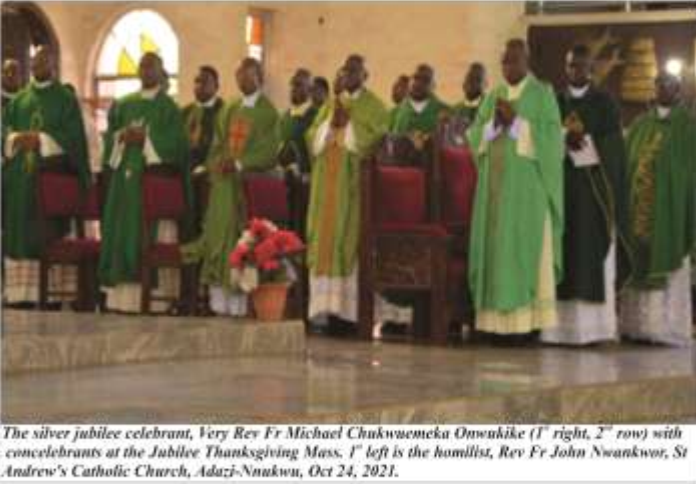 The homilist, who based his reflections on the 2nd reading of the Sunday, noted that due to worship which was central in the life of the Israelites, God chose priests who served as mediators between God and man.

He explained that there was no election process in the selection of a Catholic priest, noting that, instead, God chose whom he wished and gave him a share in the sacred priesthood to be his ambassador and a mediator between himself (God) and man. He added that the bishop ordained a priest through the discernment of the Holy Spirit.

Pointing out that priests were compassionate, Fr Nwankwor, who cited Pope Francis’ Message to the priests on the occasion of the 2014 Chrism Mass, stressed the need for priests to be shepherds who he said, had the smell of the sheep, and who would not grow tired of attending to the needs of the people. According to him, an uncompassionate priest was a contradiction to the Church.

Basing his reflections further on the gospel of the Sunday, the Catholic priest exhorted Christians against what he described as unchristian attitude of allowing the crowd around them to clip them of their spiritual wings. He charged all to like Bartimaeus, move a step towards the Master Jesus for the restoration of their lost sight.

‘Do not allow what the people say about you to demoralise you; instead, let go of your old clothes of immorality, pride, greed, laziness, and the like, and move a step forward towards Jesus, the master, for your lives to be improved,’ Fr John Nwankwor advised the people of God.