The Auxiliary Bishop of Awka Diocese, Most Rev Jonas Benson Okoye, has described priesthood as a priceless gift which cannot be equated with any amount of money.

Citing St Francis of Assisi, who he said, refused to be ordained a priest due to his unworthiness as a man but reluctantly accepted to be ordained a deacon, Bishop Okoye explained that priesthood was a priceless gift whereby unworthy individuals were chosen from among men and then perfected by God to serve in the sacred ministry as mediators between God and man. 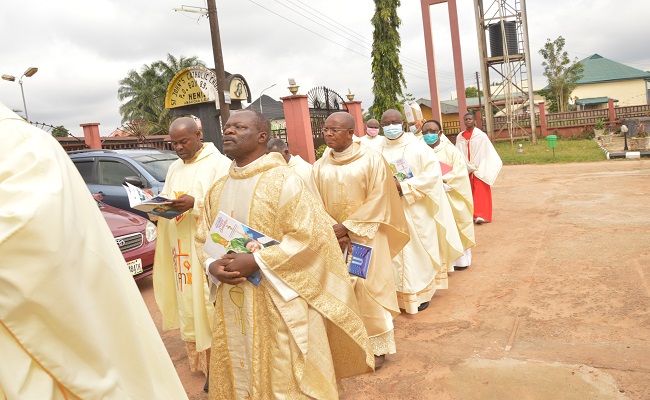 Priests and some altar servers in procession for the Diaconal and Priestly Mass. 2nd from behind is Most Rev Jonas Benson Okoye, St John’s Catholic Church, Neni, June 19, 2021.

The Auxiliary Bishop, who described the vow of obedience as the most difficult of the vows of poverty, chastity and obedience which he took at diaconal ordination, priestly ordination and episcopal consecration, reminded the priests and deacons that they must be obedient to their bishops and their superiors.

He advised them against disobedience of any sort in the course of their vocation, saying that as priests and deacons, they did not have outright decisions of their own in matters of the Church.

Reminding priests and deacons that they had at their ordination accepted to die for the people of God, Bishop Okoye encouraged them to be obedient to the people, be ready to listen to them and be with them in their difficult moments.

The bishop encouraged priests and deacons to ensure that they did not deter from the fruits of the long crucibles of formation, which, he said, they were given before their ordination, lest they disappoint the Church and the people of God. He advised them against questing for worldly riches, which, according to him, were worthless, and urged them to instead, live up to the demands of their vocation.

Most Rev Okoye also advised priests and deacons to teach the doctrine according to the mind of the Church and not to teach to be popular.

The bishop thanked the laity for what he described as their support and generosity to the priests and the religious, urging them not to relent. He encouraged the laity to pray for their priests and religious, as well as give them the financial and material support they needed to succeed in their vocation, and, by so doing, support the mission by giving.

According to him, it was necessary for the laity to pray for their priests and their religious so that their faith would not fail. He explained that it was a privilege for the laity who had the money to donate things such as cars which the priests needed for the success of their vocation.