Should the coming presidential election be conducted today, Labour Party’s standard bearer, Mr Peter Obi, would be the next president of Nigeria. This is according to the latest opinion poll by a public advocacy group, We2Geda Foundation, reports Jude Atupulazi.

The poll put Obi ahead of the three other major candidates by 51 percent.

The poll result was signed by the Chairman, Board of Trustees (BoT) of We2Geda, Ibrahim Abdulkareem; as well as a member of the BoT, Muna Obioha.

The group said 51 percent of respondents indicated their preference for Obi as the next president; 25 percent suggested voting for Atiku Abubakar of the People’s Democratic Party (PDP); while Bola Tinubu of the All Progressives Congress (APC) ranked third in the voter preference poll with 19 percent. 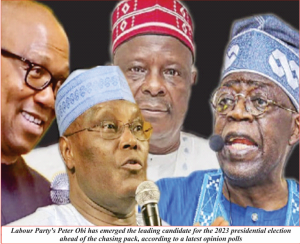 According to the group, ‘Further analysis also shows that Peter Obi remained a consistent favourite in the four major geopolitical zones, including North-Central, South-South, South-West and South-East, while Alhaji Atiku Abubakar was the poll leader in the North-East and North-West Zones.’

We2Geda explained that Nigerians between 26 and 50 years constituted the highest number of respondents in a random survey with a total of 15,438 registered voters in 36 states and the Federal Capital Territory.

The latest poll result is coming about two weeks after a pro-democracy group, Anap Foundation, released the result of its poll ahead of the 2023 presidential election which also had Obi ahead of what it described as a three-horse race involving him, Atiku and Tinubu.

Obi led the Anap Poll by 21 percent of votes.

In this earlier poll, Tinubu came second, while Abubakar came third, with Rabiu Kwankwaso of the New Nigeria People’s Party, coming a distant fourth and was described as a dark horse in the race.

Yet again, Obi also came first in another poll conducted by Bloomberg which result came out last Wednesday. The Bloomberg reports that Premise Data, the San Francisco-headquartered data company, surveyed 3,973 Nigerians from September 5 to 20, with Obi coming tops as the most preferred presidential candidate with 72 points.

According to the company, respondents to the app-based poll were selected from quotas developed by age, gender and location across Nigeria’s six geopolitical zones after which results were then weighted against the original quotas to ensure national representation.

The survey result had Bola Tinubu of the ruling All Progressives Congress (APC) trailing behind with 16% of decided voters and 23% of those yet to make up their minds.

Atiku Abubakar of PDP trailed far behind with 9% and 17% respectively.

The favourable outcomes of recent polls for Obi will however not come as a surprise to many Nigerians, given Obi’s soaring popularity. Pictures of thousands of Nigerians, mostly youths, on traditional and social media, marching on the streets across Nigeria in solidarity for Obi have become common.

This is a phenomenon that has not happened for any political aspirant since the country’s democratic experiment, and given that Obi is contesting on the platform of a supposed minor party makes such widespread support all the more astounding.

Reacting to this, a professor of Mass Communication and a close confidante of Obi, Mrs Chinyere Okunna, said people who had had the opportunity to know Peter Obi well and who worked closely with him would not be surprised by the massive support Obi currently enjoyed.

She said, ‘As Nigerians get to understand his humane and people-oriented nature, his values, intelligence, diligence, vast knowledge of national and global affairs etc., etc., this support will grow exponentially.’

For Dr Okey Ikechukwu, a leadership and governance consultant and executive director of Development Specs Academy, Abuja, Obi is real.

‘He always focuses on what makes sense to the vast majority of reasonable people. In fact, he represents a return to what we all used to know, but which somehow disappeared in our national leadership. The support he is getting is simply a confirmation of the fact that the new values he is pushing are the very values people desire across the land.

‘People are not asking for inducement because no one asks for inducement in order to go for what he wants. It’s as simple as that,’ Ikechukwu stated. 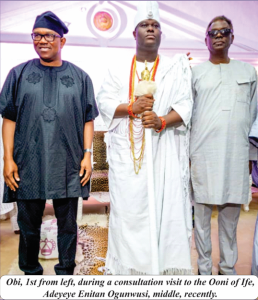 Besides that, Obi had, before now, been making consultations and reaching out to stakeholders both within and outside the country, with visits to the United States; the United Kingdo, Belgium, where he met with the European Union; and Switzerland where he met with Okonjo Iweala.

On the local scene, he had also met with the likes of former Presidents Olusegun Obasanjo and Ibrahim Babangida. Recently he also met with the Ooni of Ife at his palace, as well as with the Emir of Kano. He is the only one of the major candidates to be doing so at the moment.

These strategic meetings have also helped to bolster his ratings, with the Cable News Network, CNN, recently interviewing him. He is the only one of the presidential candidates to have so far appeared on international television.

Amid these consultations appears what may yet be the biggest boost to Obi’s presidential aspiration so far. This comes in the form of support from the formidable pan-Yoruba group, Afenifere. Its leader, Chief Ayo Adebanjo, caused a stir when he threw support for the South East producing the next president.

Before the political parties conducted their primaries, a journalist asked what is my view about the 2023 General Election? I answered and said the country should be restructured before the general election, and he followed up by asking if there should be an election, which zone should the Presidency come from? And I unhesitatingly said, of course, the South East and by extension, Peter Obi.

His words, ‘After the primaries and the candidates emerged, with Asiwaju Bola Tinubu from the South West, APC; Atiku Abubakar on the platform of PDP and Peter Obi on the platform of Labour Party; and I announced Afenifere’s support for Peter Obi, not a few Yoruba leaders questioned why I should be supporting Peter Obi, a candidate of Igbo extraction, against Asiwaju Bola Tinubu, a Yoruba.

‘I took my time to explain that the presidency is not a contest between the Yorubas and the Igbos and to a large extent I was able to convince many.

As the campaigns for the 2023 General Elections commence, and as support for Obi continues to gather force, many believe that he may well become the next president, even if by providence.

Okunna is among those who hold on to this belief. Her words, ‘Yes, I strongly believe he will be Nigeria’s next president because he is the best qualified and prepared to rescue this failed nation among all the people contesting for the position, and Nigerians who understand how desperately the country needs to be salvaged will vote for him.’

In 2003 Obi had virtually come from nowhere to take the politics of his home state of Anambra by storm and eventually won, even on the platform of a new party then, All Progressives Grand Alliance (APGA). It is exactly 20 years since then and the same scenario seems to be playing out once more, with Obi using the platform of Labour Party, a so-called weak party, to attempt to wrestle power from formidable forces.

Will he succeed? Ikechukwu believes he will. ‘Yes, Obi can become the next president of Nigeria. I do not see him losing to any of the other, largely hollow, candidates if the elections are free, fair and unconstrained.’

His confidence is shared by many Nigerians who see him as the vehicle to stop what they see as the old, thieving and corrupt status quo. As the campaigns commence, events in the coming months will certainly give a clearer picture of whether or not Obi will upset the apple cart that is the old order.