Ahead of his April 2 date for the declaration of his presidential ambition, a former governor of Anambra State and former vice presidential candidate of the People’s Democratic Party, PDP, Mr Peter Obi, has been endorsed by both the traditional rulers and presidents-general of communities in Anambra State, report Jude Atupulazi and Isdore Ndubisi. 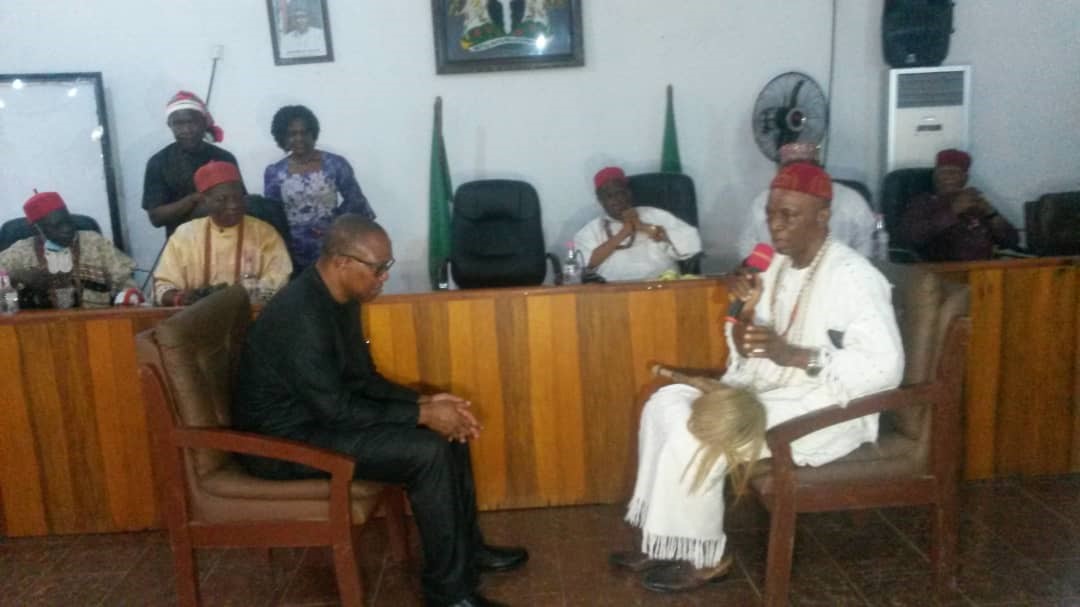 Obi, left, listens as the traditional rulers bless him as he begins his journey to Aso Rock

At separate meetings at Government House, Awka, last Thursday with traditional rulers and town union presidents, Obi disclosed his aspiration for the number one seat in Nigeria, promising to fix the country if given the mandate.

He said the essence of meeting with the monarchs was to receive their blessings before the battle ahead.

‘I’m speaking to the traditional rulers because everybody who embarks on a voyage must first inform his fathers.

‘You know me and you know how Nigeria is today. In 2019, I went with Atiku as the vice-presidential candidate but today I want to come out on my own. I just came to seek your blessings as the traditional rulers of the state,’ Obi, who said he would fix the insecurity in Borno and other places if elected, said.

He said the country was currently at her lowest ebb and needed somebody like him to move it forward.

While stating that he was in the presidential race to move Nigeria forward, Obi insisted that he believed strongly in one united Nigeria, assuring that if elected as the president, he would secure Nigeria, create jobs and pull Nigeria out of poverty.

‘Everything I have done regarding resources, I have managed them proudly. I want to move this country forward. I’m a Nigerian, I believe in one, united Nigeria, I want it secure.

Highpoints of the two meetings were his endorsement by the monarchs and presidents-general who prayed for him and assured him of going all the way with him.

On his entourage were some of his former commissioners led by Mr Henry Obaze and Prof Stella Okunna; the senator representing Anambra Central, Dr Mrs Uche Ekwunife, and Mrs Onyemelukwe, daughter of the late Alex Ekwueme.

Obi will formally declare for the presidency on Saturday, April 2.