Fr Duru, who was the homilist at the joining in marriage of former Miss Jennifer Ozuah, daughter of the Vice Chairman, Parish Pastoral Council, St Gabriel’s Catholic Church, Ọkpụno, Awka, Solomon Ozuah, to her heartthrob, Kingsley Nwolisa, said it meant the newly wedded would live out their marital life in the power of the resurrection and fulfill the purpose of God for which marriage was instituted.

While the priest lauded the new family for coming before God in the Sacrament of Matrimony, he beseeched God to manifest to them in His tripartite nature, even as the confusions of life would be lessened for them by the intercession of Mother Mary.

‘It is our prayer and the prayers of the Church that they will encounter good people on their journey,’ Fr Duru added. 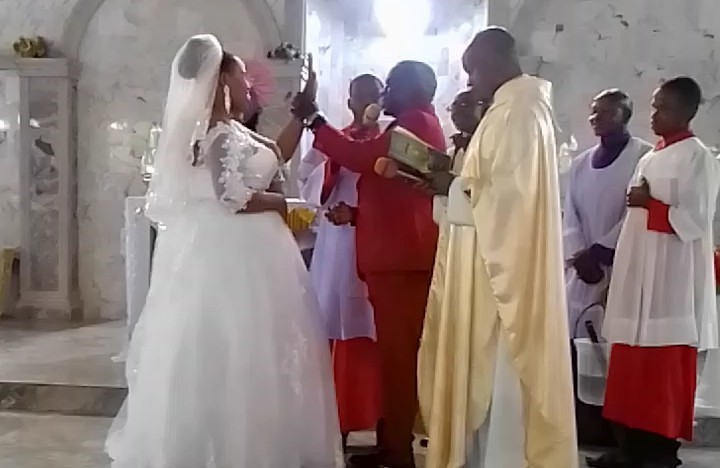 In a well-attended concelebrated votive Mass, Thursday, April 8, 2021, the newly wedded were charged to love and respect each other in the way of the Lord, with prayers were offered for them that God’s grace would help them stick with each other.

The homilist while delivering his homily, reiterated that it was for the course of marriage that the Bible instructed a man to leave his mother and father, while clinging to his wife.

Ozuah, for his part, expressed excitement at the day’s event, noting that it was the desire of every father to give out his daughter in marriage, describing it as a dream come true.

He also said it was understanding and communication that engendered peace and togetherness among couples, adding that his children never had to settle quarrels between him and his wife, while he charged the newly wedded to imbibe same.

St Gabriel’s, Ọkpụno Parish Pastoral Council’s Vice Chairman, prayed that his daughter and her husband would understand each other and settle their differences without involvement of third parties, and that they would live together in peace.

Similarly, the parents of the groom, Comrade and Mrs Francis Nwolisa, equally showed elation and said God would bless the newly wedded with male and female children.

A number of dignitaries were in attendance at the event, including staff members of Burbendorf Memorial Grammar School, Adazi-Nnukwu. Ozuah’s wife was a former Organiser in Ebenebe Deanary