On 12 October 1962, day two of the Second Vatican Council and amid the unfolding Cuban Missile Crisis, Pope John XXIII addresses diplomats accredited to the Holy See, noting that Heads of State bear responsibility for the fate of nations and urging them to listen to “the anguished cry” for peace which rises from every part of the world.

The scores of cardinals, bishops, members of delegations, and experts who flocked to Rome in October 1962 to attend the Second Ecumenical Vatican Council were living an international political crisis that in many ways was dramatically similar to the one we live in today.

Tensions were rising in the so-called Cuban missile crisis, which originated from the Cold War between the Soviet Union and the United States. 15 October is the date on which the US took a picture of the missile installations in Cuba confirming that the Soviets were building missile bases on the island. 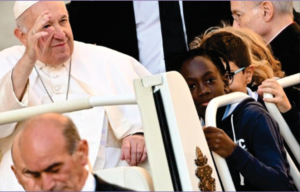 Pope John XXIII had already undertaken his extraordinary mediation action by starting a dialogue with the non-Catholic population of the Soviet bloc, and on the second day of the Second Ecumenical Council, he addressed representatives of Heads of States – the ambassadors accredited to the Holy See – and told them that “We, and all the heads of state who bear responsibility for the fate of nations,” must omit no effort to achieve peace.

“In addition to its religious significance, the Council has also a social aspect that concerns the life of peoples. Your presence here very plainly shows that.”

Pope St. John XXIII went on to say that it is clear that a Council is concerned primarily with the Catholic Church,  to show the Church’s vigour, to emphasize its spiritual mission, to adapt its methods so that the Gospel teaching may be worthily lived and more readily heeded by the people, and to promote a quest for unity and grace  “to which so many souls aspire from all corners of the earth”.

Finally, he said, “the Council wishes to show the world how to put into practice the teaching of the divine Founder, the Prince of Peace. Whoever conforms his life to this teaching helps to establish peace and to foster true prosperity.”

Harmony between nations through respect

Highlighting the duty of the Church and the moral force of Christianity to promote a message of truth, of justice, and of charity, the Pope expressed his mission to work “to establish a true peace; a peace directed toward the elevation of nations through respect for the human person and toward the procuring of a just freedom of religion and worship; a peace which nourishes harmony between nations.”

“And there is no reason why this should not exist – even if it calls for some sacrifice on their part.”

The natural consequences, Pope St. John XXIII continued, “will be love for one another, brotherhood, and the end of strife between men of different races and different mentalities.”

“Such is the great peace which all men await and for which they have suffered so much; it is time that decisive steps be taken.”

He went on to explain that “this very peace which the Church labours to establish: by prayer, by the deep respect she has for the unfortunate, the sick, the aged, and by the spreading of her doctrine which is the doctrine of brotherly love; for men are Brothers and – We say it from a full heart – all sons of the same Father.”

“The Council will certainly help to prepare this new climate and to remove all conflict, particularly war, that scourge of nations, which today would be pointing toward the destruction of humanity.”

Noting that the audience with “the Extraordinary Diplomatic Missions” was taking place in the Sistine Chapel before Michelangelo’s vast masterpiece of the Last Judgement, the Pope said: “We must indeed render an account to God: We, and all the heads of state who bear responsibility for the fate of nations.

“In all conscience let them give ear to the anguished cry of «peace, peace,» which rises up to heaven from every part of the world, from innocent children and those grown old, from individuals and from communities.

“May this thought of the reckoning that they are to face,” he added, “spur them to omit no effort toward achieving this blessing, which for the human family is a blessing greater than any other.”

Make sacrifices to save peace

He encouraged them to continue to meet, to engage in discussion, and to reach ”just and generous  agreements that they faithfully observe.”

“Let them be ready to make the sacrifices necessary to save the world’s peace.”

Nations, he continued, “will then be able to work in an atmosphere of serenity. All the discoveries of science will assist progress and help to make life on this earth – already marked by so many other inevitable sufferings – ever more pleasant.”

Thus, Pope St. John XXIII pointed out that “The Council that was opened yesterday in your presence showed forth vividly the Church’s universality.”

“This imposing assembly «of every people and tongue and nation», by proclaiming the good news of salvation to the world, which for the past 100 years has seen all manner of turmoil, will undoubtedly bring God’s enlightening answer to the agonizing problems of our day and will aid in that way the true progress of individuals and of whole nations.”