The Virgin Mary’s motherly care encourages us to use our God-given time for building up the world and peace, not destroying it, Pope Francis said on New Year’s Day.

“The reassuring and comforting gaze of the Holy Virgin is an encouragement to make sure that this time, granted us by the Lord, might be spent for our human and spiritual growth,” the pope said Jan. 1, the Solemnity of Mary, Mother of God. 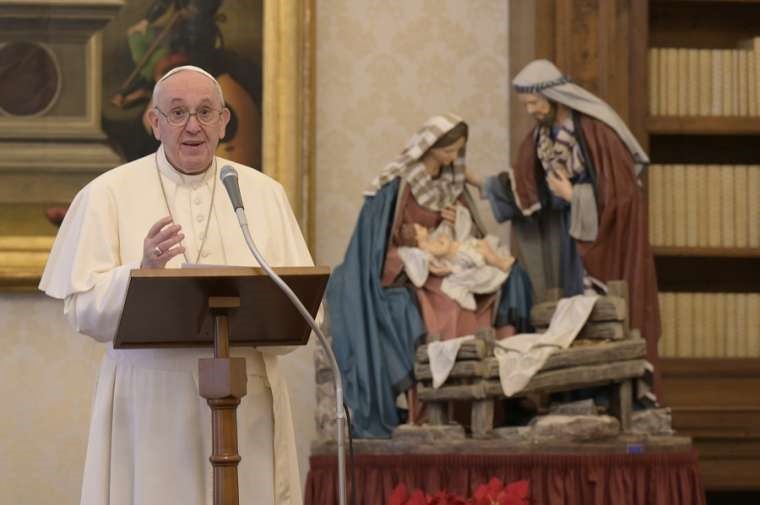 “That it be a time in which hatred and division are resolved, and there are many, that it be a time to experience ourselves as brothers and sisters; a time to build and not to destroy, to take care of each other and of creation,” he continued. “A time to make things grow a time of peace.”

Speaking via livestream from the library of the Apostolic Palace, Francis pointed to a nativity scene depicting St. Joseph, the Virgin Mary, and the Child Jesus lying in Mary’s arms.

“We see that Jesus is not in the crib, and they told me that the Madonna said: ‘Won’t you let me hold this Son of mine a bit in my arms?’ This is what the Madonna does with us: she wants to hold us in her arms to protect us as she protected and loved her Son,” he stated.

According to Pope Francis, “Mary watches over us with maternal tenderness just as she watched over her Son Jesus…”

“May each one of us make sure that [2021] be for everyone, a year of fraternal solidarity and peace, a year filled with expectant trust and hope, which we entrust to the heavenly protection of Mary, Mother of God and our Mother,” he said, before praying the Angelus for the Marian feast day.

The pope’s message also marked the Jan. 1, celebration of the World Day of Peace.

He recalled the theme of this year’s peace day, which is “A Culture of Care as a Path to Peace,” and said the difficulties of the past year, including the coronavirus pandemic, “taught us how much it is necessary to take an interest in others’ problems and to share their concerns.”

Francis added that this peace must begin with us; we must be “at peace inside, in our hearts — and with ourselves, and with those who are near us.”

“May the Virgin Mary, who gave birth to the ‘Prince of Peace’ (Is 9:6), and who cuddles him thus, with such tenderness in her arms, obtain for us from heaven the precious gift of peace, which cannot be fully pursued with human force alone,” he prayed.

Peace, he continued, is a gift from God, which must be “implored from God with incessant prayer, sustained with patient and respectful dialogue, constructed with an open collaboration with truth and justice and always attentive to the legitimate aspirations of individuals and peoples.”

“My hope is that peace might reign in the hearts of men and women and in families, in recreational and workplaces, in communities and in nations,” he stated. “We want peace. And this is a gift.”

Pope Francis concluded his message by wishing everyone a happy and serene 2021.

After praying the Angelus, Pope Francis asked for prayers for Bishop Moses Chikwe of Owerri, Nigeria, who was kidnapped with his chauffeur Dec. 27. A Catholic archbishop said this week that reports the bishop had been killed were “unconfirmed” and asked for continued prayers for his release.

Francis said, “let us ask the Lord that they and all who are victims of similar actions in Nigeria might be restored to liberty unharmed and that that beloved country may regain security, harmony and peace.”

The pope also expressed his sadness for a recent escalation of violence in Yemen and prayed for victims. A blast at an airport in the southern Yemeni city of Aden Dec. 30 reportedly killed at least 25 people and wounded 110.

“I pray so that efforts will be made to find solutions that allow peace to return to that tormented population. Brothers and sisters, let us think of the children in Yemen! Without education, without medicine, hungry. Let us pray together for Yemen,” Francis urged.

Earlier in the morning Jan. 1, Cardinal Pietro Parolin offered Mass in St. Peter’s Basilica for the feast day. Pope Francis was unable to attend as scheduled, because of a painful flare up of his sciatica, according to the Vatican.

At the Mass, Parolin read a homily prepared by Pope Francis, in which he noted that St. Francis “loved to say that Mary ‘made the Lord of Majesty our brother.’”

“Through Mary, we encounter God the way he wants us to: in tender love, in intimacy, in the flesh. For Jesus is not an abstract idea; he is real and incarnate; he was ‘born of a woman,’ and quietly grew.”