Pope Francis told priests on Monday that “spiritual worldliness” is one of the worst temptations in clerical life.

“Today’s problems demand that we priests conform to the Lord,” the pope said in an audience with students of the Pontifical Mexican College at the Vatican on March 29.

“We are called not to underestimate the worldly temptations that can lead to insufficient personal knowledge, self-referential attitudes, consumerism, and multiple forms of evasion of our responsibilities. … Please beware of worldliness. It is the door to corruption,” Pope Francis said.

During the meeting in the Clementine Hall of the Apostolic Palace, the pope encouraged the Mexican clergy to keep their gaze fixed on “Christ, the Suffering Servant.” 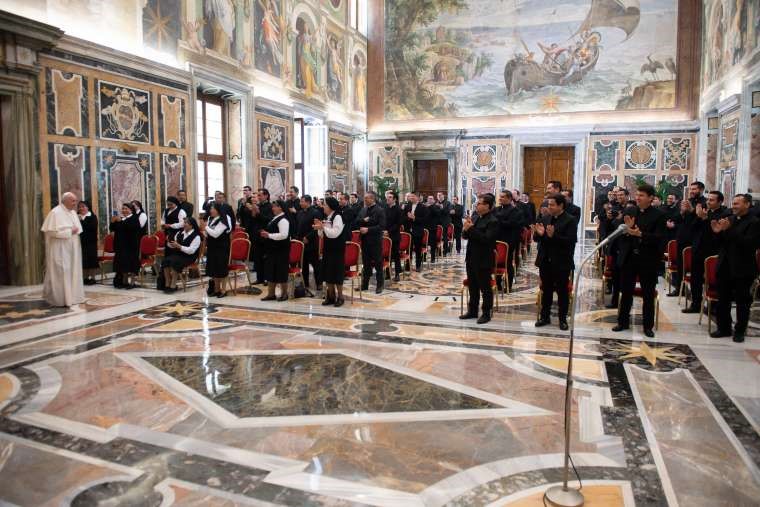 Pope Francis holds an audience with members of the Pontifical Mexican College at the Vatican March 29, 2021. / Vatican Media

The pope pointed to the writings of 20th-century Jesuit theologian Henri de Lubac, particularly recommending the last few pages of his book, “The Splendor of the Church,” on spiritual worldliness.

Pope Francis also cited an “ancient text from a Benedictine,” which, he said, argued that “spiritual worldliness is the worst evil that can happen to the Church.”

He added: “It is worse still than the times when popes had concubines.”

The pope said that it is essential for priests to conform their outlook with that of Christ’s gaze of love, which generates “tenderness, reconciliation, and fraternity.”

“We need to have a look of tenderness with that our Father God sees the problems that afflict society: violence, social and economic inequalities, polarization, corruption and lack of hope, especially among the youngest people,” he said.

The Pontifical Mexican College was founded in 1967. It was originally conceived as a seminary, but very soon it consolidated its identity as a priestly community.

Today Mexican Diocesan Priests are sent to live at the pontifical college in Rome while obtaining further degrees of study at pontifical universities.

Mexico is the world’s second-largest Catholic country with more than 96 million Catholics — 85% percent of its total population, according to the Pew Research Center.

“The vivid memory of the encounters I had with the holy people of God during my apostolic visit to Mexico in 2016 — which in a certain way is renewed each year with the celebration of the Solemnity of Our Lady of Guadalupe here in the Vatican Basilica — accompanies me today, and I greet every one of you, who constitute the community of the Pontifical Mexican College,” Pope Francis said.

The pope asked for the intercession of the Virgin Mary and of St. Joseph, who he said is a model of “humble and silent service” for all of the clergy in Mexico.

“May the Lord bless you,” he said. “And please do not forget to pray for me. I need it because this job is not easy at all.”