Pope Francis on Easter: Christ’s Wounds are The Seal of His Love for Us

May those who suffer take refuge in the wounds of Christ, and through them, receive the hope which does not disappoint, Pope Francis prayed on Easter Sunday.

In his Urbi et Orbi blessing April 4, the pope said the witnesses of Christ’s resurrection “report an important detail: the risen Jesus bears the marks of the wounds in his hands, feet and side.”

“These wounds are the everlasting seal of his love for us,” Francis said. “All those who experience a painful trial in body or spirit can find refuge in these wounds and, through them, receive the grace of the hope that does not disappoint.”

“Amid the many hardships we are enduring, let us never forget that we have been healed by the wounds of Christ,” he said. 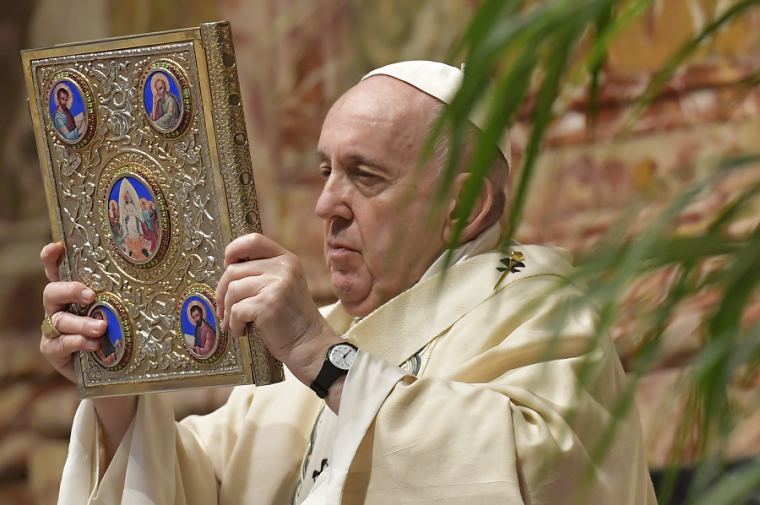 The pope added: “In the light of the Risen Lord, our sufferings are now transfigured. Where there was death, now there is life. Where there was mourning, now there is consolation. In embracing the cross, Jesus bestowed meaning on our sufferings and now we pray that the benefits of that healing will spread throughout the world. A good, happy and serene Easter to all of you!”

Pope Francis gave the Easter Urbi et Orbi message and blessing from the Altar of the Chair in St. Peter’s Basilica, where he had offered Easter Sunday Mass with a congregation of around 200 people.

With Italy in a new lockdown because of the coronavirus pandemic, the blessing was given inside the basilica, instead of from the central loggia overlooking St. Peter’s Square.

After the proclamation of the Gospel, sung in Latin and Greek, the pope did not pronounce a homily, but kept a moment of silence for personal reflection.

At the end of the Mass, Pope Francis thanked everyone who helped to make the Holy Week and Easter liturgies at the Vatican beautiful. He also thanked Cardinal Angelo Comastri, who has recently retired, for his 16 years of service as the archpriest of St. Peter’s Basilica.

In the Urbi et Orbi blessing, Pope Francis noted that “once again this year, in various places many Christians have celebrated Easter under severe restrictions and, at times, without being able to attend liturgical celebrations.”

“We pray that those restrictions, as well as all restrictions on freedom of worship and religion worldwide, may be lifted and everyone be allowed to pray and praise God freely,” he said.

The pope explained that “Today, throughout the world, the Church’s proclamation resounds: ‘Jesus, who was crucified, has risen as he said. Alleluia!’”

The Easter message, he continued, is not a mirage or a magic formula, nor is it an escape from the difficult situation of the COVID-19 pandemic and the severe social and economic crises it has caused.

“Nonetheless – and this is scandalous – armed conflicts have not ended and military arsenals are being strengthened,” he said.

“In the face of, or better, in the midst of this complex reality, the Easter message speaks concisely of the event that gives us the hope that does not disappoint,” the pope explained. “’Jesus who was crucified has risen.’”

This message is about a man “of flesh and bone, with a face and a name: Jesus,” he said.

“The crucified Jesus, none other, has risen from the dead. God the Father raised Jesus, his Son, because he fully accomplished his saving will,” the pope added. “Jesus took upon himself our weakness, our infirmities, even our death. He endured our sufferings and bore the weight of our sins. Because of this, God the Father exalted him and now Jesus Christ lives forever; he is the Lord.”

Pope Francis prayed that those who are sick with the coronavirus, or who have lost loved ones in the pandemic, may be comforted by the Risen Christ.

He prayed for the vulnerable, for those who have lost their jobs, and for anyone experiencing financial insecurity.

He also prayed that the risen Jesus would give hope to all the children and young adults forced to go a long time without attending school or university, or without seeing their friends.

“I express my closeness to young people throughout the world,” Francis said, “and, in these days, especially to the young people of Myanmar committed to supporting democracy and making their voices heard peacefully, in the knowledge that hatred can be dispelled only by love.”

He prayed that Jesus will be a source of rebirth to migrants fleeing war and poverty, and thanked Lebanon and Jordan for taking in so many refugees of the conflict in Syria.

“May the people of Lebanon, who are undergoing times of difficulty and uncertainty, experience the consolation of the Risen Lord and find support from the international community in their vocation to be a land of encounter, coexistence and pluralism,” he said.

The pope prayed that Christ would bring peace to the conflicts in Syria, Yemen, and Libya. Remembering his trip to Iraq last month, he said, “I pray that it may continue along the path of peace and thus fulfill God’s dream for a human family hospitable and welcoming to all his children.”

For the people of Africa, he prayed for freedom from internal violence and international terrorism, especially in the Sahel, Nigeria, Tigray, and the Cabo Delgado region.

“There are still too many wars and too much violence in the world!” he emphasized. “May the Lord, who is our peace, help us to overcome the mindset of war. May he grant that prisoners of conflicts, especially in eastern Ukraine and Nagorno-Karabakh, may return safely to their families, and may he inspire world leaders to curb the race for new weaponry.”

At the end of the Easter message, Cardinal Mauro Gambetti read the pronouncement of the plenary indulgence associated with the Urbi et Orbi before Pope Francis bestowed his blessing on the city of Rome and the world.