Pope Calls for Transformation of Economy for Common Good

Pope Francis meets with a group of entrepreneurs from Spain, and highlights the importance of transforming the global economy, so that everyone can benefit from it, especially the poor and marginalised.

Addressing a group of entrepreneurs from Spain in the Vatican’s Consistory Hall, Pope Francis welcomed and greeted them, describing their presence as “a sign of hope”.

During the audience with the “Confederación Española de Asociaciones de Jóvenes Empresarios” and the “Confederación de Empresarios de Galicias”, he noted that we are living in an era with “well-known economic and social imbalances”, adding that there is an urgent need to propose an adequate economy to help solve the major problems we are experiencing worldwide.

The Holy Father went on to express three ideas he considers relevant for their journey as entrepreneurs.

The first consideration he offered was “prophecy”. Pope Francis explains that in the Bible, “the prophet is one who speaks on behalf of God, who conveys His message, through which they bring about change in the context in which they live.” 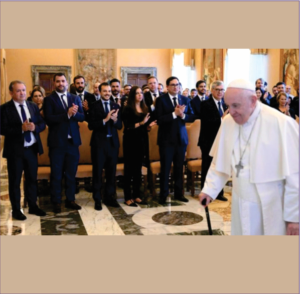 In today’s complex context, characterized by war and the environmental crisis, Pope Francis noted that “it is up to you to develop your service, let us say, as prophets who proclaim and build the common home, respecting all forms of life, caring for the good of all and promoting peace. Without prophecy, the economy, and all human action in general, is blind.”

Work on your spiritual health

He explained that “just as the earth, when it is well cultivated and cared for” this relationship “bears abundant fruit”. In this way, when we cultivate spiritual health and when we have a well-cared-for relationship with the Lord, “we begin to bear much good fruit.”

Bearing that in mind, the Pope stressed that “the heroism that the world needs from you today can only be sustainable if you have strong roots.”

Economic conversion will be possible when we experience a conversion of the heart, he added, as then, we will be able to “reverse the prejudicial actions that are preparing a bleak future for the new generations.”

Do everything with love

The third and final thought “concerns work and poverty”, said the Pope.

Upholding Saint Francis of Assisi as an example, Pope Francis reminded those present that all he did was done with the love he felt for the poor and with his austere way of life.

“With the values of work and poverty, which imply a complete trust in God and not in things, an economy can be created that reconciles the members of the different stages of production, without them despising each other, without creating more injustice or experiencing cold indifference,” explained the Pope.

On the other hand, he stressed, “this does not mean that you love extreme poverty, which, on the contrary, must be combated, and to this end you have good tools, such as the possibility of creating jobs, and thus contribute to giving dignity to your neighbour.”

Create an economy at the service of each human being

Bringing his discourse to a close, Pope Francis encouraged the entrepreneurs present to “continue to creatively transform the face of the economy, so that it may be more attentive to ethical principle” as well as to “not forget that its activity is at the service of the human being, not just of the few, but of all, especially the poor.”

Finally, the Holy Father entrusted all those present to the protection of the Blessed Virgin Mary and St Joseph, who took care of the family and the home “with a parental heart”.