According to a nurse who was near him before he breathed his last, the late Pope Benedict XVI, mustering his last strength, had muttered in his death bed, ‘Lord, I Love You.’ That was around 3am on December 31, 2022.

Fides reports that the pope emeritus spoke those last words in Italian in a barely audible whisper.

According to Vatican News, the nurse who was near him recounted the last words she heard the pope say in the dead of the night hours before leaving the world to meet his maker. ‘Lord, I love you.’

Vatican News reports that Benedict XVI’s secretary, Archbishop Georg Gänswein, recounted emotionally how the man of God spoke before leaving, ‘With just a whisper of a voice, but in a clearly distinguishable manner, he said in Italian, ‘Lord, I love you,’ reports Jude Atupulazi.

Gänswein admitted that he was not there when the words were spoken, but the nurse told him after the Pope died. He added that those were his last comprehensible words because he was not able to express himself again afterwards.

In the wake of Pope Benedict’s death, the Catholic Bishop of Awka Diocese, His Lordship Most Reverend Paulinus Ezeokafor, said that the Pope Emeritus lived a true and quiet life, while condoling with Pope Francis on behalf of priests and religious of Awka Catholic Diocese. 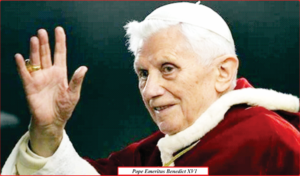 His words, ‘On behalf of the priests, religious and laity of the Catholic Diocese of Awka, I condole with Pope Francis and Universal Church. May his soul rest in peace, Amen.’

Former Pope Benedict XVI died on Saturday, December 31, at the age of 95. According to the Holy See Press Office, Benedict, who became the first German pontiff in a millennium, died at the Mater Ecclesiae Monastery where he had chosen to live after stepping down in 2013. The Vatican had ahead of his funeral announced that his remains would lie-in-state in Saint Peter’s Basilica, beginning on Monday, January 2. On January 5, Pope Francis supervised the funeral which took place in St Peter’s Square.

Fides recalls that the Vatican earlier revealed that the former Pope was under medical supervision as his health was deteriorating due to old age.

In his weekly general audience earlier in the week, Pope Francis revealed that his predecessor was ”very sick” and requested prayers for Emeritus Pope Benedict, who, he said, in silence, was sustaining the Church. The Pope reportedly said near the end of an hour-long audience. ‘I remind you that he is very sick’.

Benedict served as the influential head of the Vatican’s doctrinal office, formerly known as the Congregation for the Doctrine of the Faith, for nearly 25 years as Cardinal Joseph Ratzinger. He was constantly being monitored in his last days as his health worsened.

Eminent world leaders have offered their condolences on social media. EU President Ursula von der Leyen wrote, ‘Pope Benedict’s passing saddens me. My sympathy goes out to all Catholics. He had set a strong signal through his resignation. He saw himself first as a servant for God and his Church. Once his physical strength waned, he continued to serve through the power of his prayers.’

French President, Emmanuel Macron wrote, ‘My thoughts go out to Catholics in France and around the world, bereaved by the departure of His Holiness, Benedict XVI, who worked with soul and intelligence for a more fraternal world.’

UK Prime Minister, Rishi Sunak, said, ‘I am saddened to learn of the death of Pope Emeritus Benedict XVI. He was a great theologian whose UK visit in 2010 was a historic moment for both Catholics and non-Catholics throughout our country. My thoughts are with Catholic people in the UK and around the world today.’

In 2005, Benedict, whose official name was Joseph Ratzinger, from the state of Bavaria, was elected to succeed the well-liked Pope John Paul II, who had been reigning for 27 years.

The ex-pope’s funeral took place in St Peter’s Square, the vast square in front of the Basilica, on Thursday at 9:30 am.

Vatican spokesman, Matteo Bruni, had told journalists earlier that the simple nature of the ex-Pope’s funeral was according to his wish, according to AFP.

Pope Francis had alerted the world to Benedict’s frailness on the Wednesday preceding his death when Pope Francis called on the world’s Catholics to pray for the ailing Pope Benedict.

He later visited him at the Mater Ecclesiae Monastery inside the Vatican Gardens which became Benedict’s home when he retired. 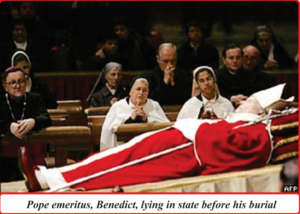 Bruni said the ex-pope had that same day received “the anointment of the sick”, or “last rites” as it is often called, a Catholic tradition in which a person’s soul is cleansed of sins in preparation for the afterlife.

That was performed at the end of a Mass at his home in the presence of the Memores Domini, four lay women similar to nuns, who lived with him.

Ahead of the burial, the Vatican had said official delegations from Italy and the ex-pope’s native Germany would attend the funeral.

Afterwards, ‘the coffin of the Supreme Pontiff Emeritus will be taken to St Peter’s Basilica, and then into the Vatican Grottoes for burial,’ the Vatican had said.

In 2020, media reports said Benedict had chosen to be buried in the former tomb of John Paul II, in the crypt of St Peter’s.

The body of the beloved Polish pope was moved to the upper part of the basilica when he was beatified in 2011. He was confirmed a saint in 2014.

Traditionally, when a pope dies, his “Fisherman’s Ring”- a signet ring specially cast for each new pope which once was used to seal documents – is also destroyed.

When Benedict left office, the face of his ring was etched with an “X” to make it unusable.