Shaibu, who is in charge of Edo State’s drive to turn sports into big business, believes that the country will get it right when it sports administration is okay.

Speaking in Lagos at the weekend, the deputy governor, who is a registered player of Bendel Insurance Football Club of Benin, said poor management has been hindering the growth of sports sector, adding that things will only get better when technocrats join in building the sector. 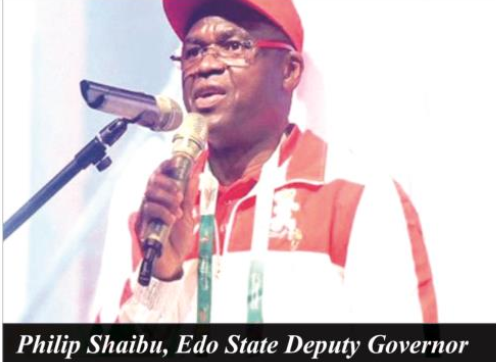 ‘I am in government and I have seen that government cannot run sports successfully because of the bureaucracy in the system. There are so many funny things going on in the system that requires extra discipline to correct,’ he said.

Using Bendel Insurance to buttress his point, Shaibu said: “When we came to power, we discovered that the club had over 300 members of staff, some of who were leaving abroad. The club had money but the management size ate up the money such that players were owed several months’ unpaid emoluments. The club had no team bus.

‘We had to clean up the system by bringing Mrs. Sabina Chikere to help us rebrand the club. The idea was to make Insurance a model professional club with all the rules of professionalism.

‘We have scaled the club’s management from over 300 to 15 and we don’t owe anybody salary or any allowance. We have also been able to buy a bus for Insurance with the proceeds of sales of jerseys.”

Shaibu disclosed that Edo State is gradually taking Bendel Insurance and Edo Queens, as well as a few other sports to the private sector and “our target is to list Bendel Insurance in the capital market. What we are doing now is merchandising to boost our funds.

‘Our budget this year is N250 million, we already have N50 million through the jersey sponsorship deal with Sterling Bank and so, what remains is N200 million.

‘We are gradually reducing government’s funding of Insurance so that when we leave, the club will still function no matter who takes over government.’

He said Sterling Bank’s N50 million deal with Bendel Insurance is a stepping stone to the club’s target capital of N500 million, adding that the partnership is much more than the stated amount because it also involves sales of jerseys through the bank, promotions, publicity and several other derivable.

‘The bank has come to drive our privatization process. This season, Insurance will raise N250 million, while Edo Queens are expected to rake in N50 million from Jersey sales.

‘We are building camps that will house Insurance and Edo Queens with four pitches and a digital gymnasium. We are putting many things in place to ensure that the clubs can run on their own.’

Explaining the decision to disband the Edo State Sports Council and appoint new managers of a new Commission, Shaibu said the step was taken as part of efforts to rebuild the sector.

‘We signed the bill for the Sports Commission in August last year and just last week, we appointed a board led by Yusuf Alli. All the members of the Commission are new; none of the old members of the defunct Council is involved in the new dispensation.

‘The idea is to start on a new slate and return to our position as the number one sports state in Nigeria.

‘We want to create an environment where we can discover talents from the grassroots, and that is why we have gone back to the Principals’ Cup, Headmasters’ Cup and other schools sports activities we were known for during the Samuel Ogbemudia years.

‘We have built 20 mini stadiums across the zones, with some grass pitches, while a few have synthetic turfs.’

He revealed that some of the incoming members of the associations are giants in the society, who are coming with many years of experience in the private sector.