The Commissioner of Police Anambra State Command, CP Tony Olofu, has condemned the series of security breaches that have taken place within the State and ordered tactical commanders of the Command to immediately put an end ‘to the madness’.

This comes as the former governor of Anambra State, Mr Peter Obi, also condemned the chaotic security situation in the state, especially the killing or Dr Chike Akunyili, husband of former minister, the late Dora Akunyili; describing it as saddening. Obi said the problem required the concerted efforts of  all stakeholders to find a solution. 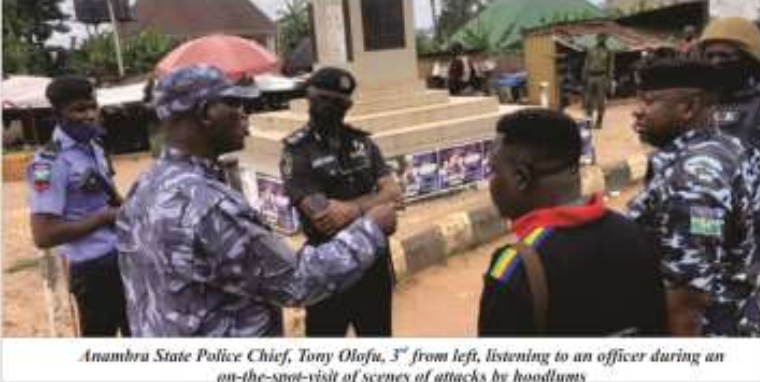 The traditional ruler of Agulu, Igwe Innocent Obodoakor, and the traditional Prime Minister, Chief Paulinus Anagboso, equally condemned the killing of Akunyili; just as the community has declared days of mourning.

Meanwhile, the Commissioner of Police, while regretting the loss of lives and valuables, has sued for calm, disclosing that the Command was collaborating with other security agencies in state to decisively deal with the perpetrators whom he described as bereft of every iota of human conscience and sensibility. He stated this when he led senior police officers from the command on an on-the-spot assessment at the crime scenes.

He implored members of the public, particularly residents of the state, to continue to partner with the police with a view to containing the situation, while assuring of the Command’s readiness to flush out the hoodlums.

A statement signed by DSP Tochukwu Ikenga, PRO of the State Police Command, said that a team of police operatives attached to Aguata Area Command at about 2pm on September 28, while on a routine patrol duty along Ezinifite/Igboukwu Road, was attacked by hoodlums riding in two unmarked Sienna vehicle and a Toyota Hummer bus. The patrol vehicle was set ablaze, with the perpetrators fleeing the scene. The police said no life was lost and that normalcy had been restored in the area.

The police statement also said there was a gun attack on a member of the public at about 5pm along Oko Road. The criminal elements set the vehicle of the victim ablaze, leaving him with a bullet wound and escaped.

‘The victim was rescued and taken to hospital where he is responding to treatment,’ the statement stated; even as it added that about 4pm same day, the hoodlums, in an attempt to snatch a Lexus 350 from its driver along Agulu Road, shot him.

‘The attackers abandoned the victim and the car and fled. The victim was immediately rushed to the hospital, but was confirmed dead by doctors on duty. Meanwhile the body has been deposited to the hospital and the said vehicle recovered.

‘Also, the miscreants, at about 5pm along Nkpor Round About, without any provocation, attacked and shot a police inspector attached to a VIP. He was quickly rushed to the hospital but was confirmed dead by the doctor on duty. The assailants also beheaded a yet to be identified man and fled the scene.

‘At Afor Nkpor Junction, three yet unidentified lifeless bodies were recovered, a burnt Toyota Hilux and a vandalized Toyota hummer bus were also seen at the scene and the bodies taken to the hospital and regrettably one of the bodies was identified as one Mr Chike Akunyili,’ the statement read.

It said the CP had decried the development, and assured that they  was committed in enhancing public safety and peace.

For his part the immediate past Anambra governor, Mr Peter Obi, speaking with newsmen at the palace of the traditional ruler of Agulu, Igwe Innocent Obodoakor, described news of his Akunyili’s death as a sad situation.

He said he learnt about the killing from the social media early Wednesday after returning from an important event in Lagos. Obi said he immediately went to Iyienu Hospital Dr Akunyili and the others were they were deposited, where Akunyili’s son identified him.

‘It is Very very sad. If you know Dr Akunyili you’ll know he was a very good man who hurt no one,’ Obi said, noting that no one could tell why it happened. The Vice Presidential candidate of PDP in the last general elections, who said had spoken to the deceased’s first son who live in the U.S., thanked the police at Ogidi for their efforts in taking the bodies to the mortuary.

He said the situation in the state required the collective attention of all stakeholders or else everybody would be consumed.

The monarch of Agulu, Igwe Obodoakor, described the development as terrible and that they never envisaged it. ‘It is bad that his kids were left to be parentless at this time. Chike was a good and lovely man who harmed no one. This could have happened to anyone,’ the traditional ruler said, while urging the government to take measures to contain the situation.

The traditional Prime Minister of Agulu, Chief Paulinus Anagboso, could only say, ‘Agulu is finished. His (Akunyili’s) loss is a big one to Anambra and Nigeria. We are mourning.’

Meanwhile Agulu Community, within the week, declared three days of mourning following the killing of two of their sons on same day by unknown gunmen.

Apart from Dr Chike Akunyili, Fides learnt, another Agulu man, Mr Azubuike Anikwata, from ifiteani Village, Agulu, who came back from Turkey and who was building an industry in the community, was equally killed.

Okpala called on the State Government to beef up security in the state and condole with the families of the deceased.