The President of the association, Mr Anthony Uketui, made this known when the group paid a condolence visit to the bereaved Oliobi Family of Ifiteani Village, Nimo, during the funeral ceremony for the deceased priest at St Vincent’s Parish, Nimo, Njikoka LGA, Anambra State on Thursday, February 18.

According to the president, the association would set up a monument at the Priests’ Welfare Home, Awka, in memory of the late Rev Fr Oliobi who served and bequeathed a legacy as a pioneer Rector, St Dominic’s Savio Seminary, Akpu, 1980-1983, and pioneer Rector, St John Bosco Seminary, Isuaniocha, 1983-1984. 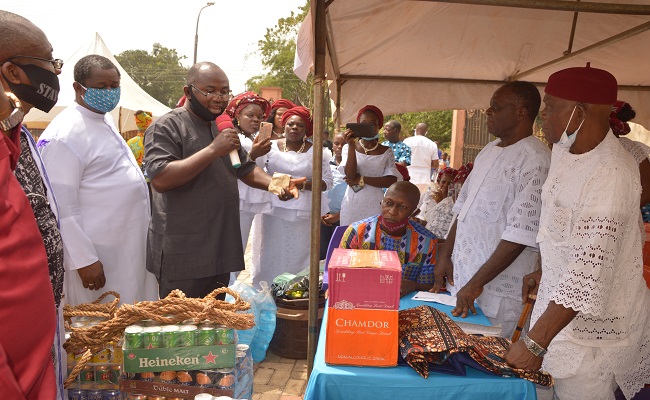 Mr Uketui, who said they had visited the welfare home while their former rector was alive and after his death, noted that they chose the home because Fr Oliobi had told them that the Priests’ Welfare Home was dear to him.

In an interview with Fides, Mr Anthony Uketui described the late Fr Oliobi as a mentor, an educator and a personality that one could always count on. Uketui, who recalled the relationship which he and other pioneer students had with their late rector while they were still very young, said they were still reminiscent of the impact which his formation had on them.

Pointing out that they valued the formation which Fr Oliobi impacted on them, the president added that their late rector was an honourable and a respectable gentleman who, he said, would be missed by many.

He identified the virtues of being honourable and sincerity as the legacy the late Fr Oliobi left behind, which he, as well as members of the association, hoped to sustain.

The late Rev Fr Raphael Oliobi, who died at 79 years on January 26, 2021, and was buried on February 15, 2021, was until his death, a priest in-residence at the Awka Diocesan Priests’ Welfare Home, GRA, Awka. He was a priest of the Catholic Diocese of Awka who was ordained on August 13, 1972.