…Gets Provisional License from NUC

At long last, Peter University, Achina/Onneh, may kick-start academic activities in October this year. This follows the receipt of academic licence by the foremost Catholic institution from the National Universities Commission, NUC. An excited Catholic Bishop of Awka Diocese, Most Rev Paulinus Ezeokafor, made this disclosure to Fides

‘It is an epoch-making event and a cause for celebration for the Catholic Dioceses of Awka and Ekwulobia,’ Bishop Ezeokafor gushed, following the provisional clearance which made Peter University the 108th private University in Nigeria, report Mercy Hill, Alexander Johnson Adejoh, Adejumoke Aminat Alebiosu and Anthony Akin.

Speaking during an interview with Fides Media, Bishop Ezeokafor, who told Fides of his excitement over the presentation of the provisional licence to operate, said the University, jointly owned by Awka and Ekwulobia Dioceses, was ready in terms of structure and man power to commence academic activities in the month of October.

The presentation ceremony which was conducted by the Minister of Education, Mallam Adamu Adamu, took place at Idris Abdulkadir Auditorium, National Universities Commission, Maitama, Abuja, on Thursday 12 May 2022. 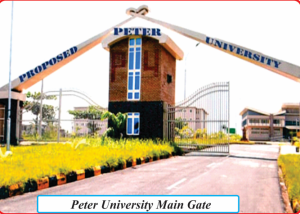 ‘This is the reason state universities cost much more than federal universities. Private universities, on the other hand, do not receive any subventions from the government,’ Bishop Ezeokafor explained.

On the quality of education expected of the new university, the Bishop said that Peter University was conceived to provide quality tertiary education in Arts, Science and Technology.

Recalling the motivation behind the establishment of the university, the prelate said that Peter University was set up not to make money, but to make people.

He said that all the principal offices, including academic and non-academic staff, were currently being worked out for the appointment of requisite officers. He explained that the institution was not included in the current Joint Admission and Matriculation Board, JAMB schedule, but that admission was expected to commence in October.

University to thrive and paid glowing tributes to all benefactors who had made it possible for the university project to be completed.

‘Peter University is a dream come true for many of us and I will not fail to thank all our benefactors,’ he said.

The Bishop singled out the former Auxiliary Bishop of Awka Diocese and now the Catholic Bishop of Nnewi Diocese, Most Rev. Jonas Benson Okoye for appreciation and recalled the energy, push, physical presence, contacts, and many other areas the then Auxiliary Bishop had worked tirelessly to see to the fruition of the diocesan dream for a new university. He thanked various personnel, clergy and lay people, who worked closely with him, including the presbyterium of the then Diocese of Awka, as well as various groups and individuals within and outside the diocese whose sacrifices, he observed, brought about the current joyful occasion.

He thanked Bishop Peter Okpaleke, the Catholic Bishop of Ekwulobia, for the efforts he was making to fulfil his diocesan part to what was being done towards the realization of the dream that was Peter University.

With the creation of Ekwulobia Diocese, Peter University now belongs to the two Dioceses of Awka and Ekwulobia.

Fides gathered that so far, over four billion Naira has been expended on the construction of the modern structures sited over the hectares of land in Achina/Onneh.

Earlier in his address of welcome at the presentation of licence ceremony in Abuja, the Education Minister, Mallam Adamu Adamu, congratulated the owners of the newly approved universities and promised to lend his support to them whenever the need arose.

The minister stated that the licences were approved by the Federal Executive Council on the 6th of April 2022. He allayed the fears of those with reservations regarding the growing number of private universities in Nigeria, noting that with a population of over two hundred million, Nigeria needed even more universities to bolster the economic fortunes of the country through education.

For his part, Professor Abubakar Rasheed, the Executive Secretary of National Universities Commission (NUC) congratulated the new universities and noted that Nigeria still needed more universities because of the high demand for education in the country.

‘Nigeria is still grossly deficient in access to the university education sub-sector which is the highest producer of the skilled level manpower required to activate and sustain the socio-economic transformation of the country,’ he noted, assuring the proprietors of the newly approved private universities of the NUC’s continued support and co-operation.

Rev. Fr Prof. Emmanuel Umezinwa, the PIC (Planning and Implementation Committee) chairman, told Fides that with the giving of licence by the NUC, the coast had been cleared for the resumption of academic activities. He explained that what was left between now and the resumption of academic activities were the resource verification by the relevant organ of the NUC, hiring of workers, equipment of the academic block, and so on. These were the things, he said, one could not do unless the licence was given.