At long last, Peter University, Achina/Onneh, has been given approval to start operations. The university jointly owned by the Catholic Dioceses of Awka and Ekwulobia, is among the 12 new private universities approved by the Federal Government.

The chairman of the Planning and Implementation Committee, PIC, Fr Emmanuel Umezinwa, told Fides how he got the news.

His words, ‘The Director, DEPU (Directorate for the Establishment of Private Universities) called me at exactly 17: 10pm today, (Wednesday, April 6), to confirm and congratulate all of us; the Bishops of Awka and Ekwulobia Dioceses, the PIC, and the faithful people of the two dioceses, on the approval and licence granted today by the Federal Executive Council for the take-off of our Peter University, Achina/ Onneh. To God be the Glory.’

In his own reaction, to the approval, the Catholic Bishop of Awka Diocese, Most Rev Paulinus Ezeokafor, described the development as the best thing to have happened to Awka, Ekwulobia Dioceses.

Speaking at St. Patrick’s Catholic Cathedral, Awka, Bishop Ezeokafor said he was highly elated, stating that the approval did not come easy, as a lot was put into the project.

The visibly happy Catholic prelate expressed gratitude to God for granting their request, even as he thanked all those who contributed materially and financially towards the actualization of the project, which, he said, was dear to him. 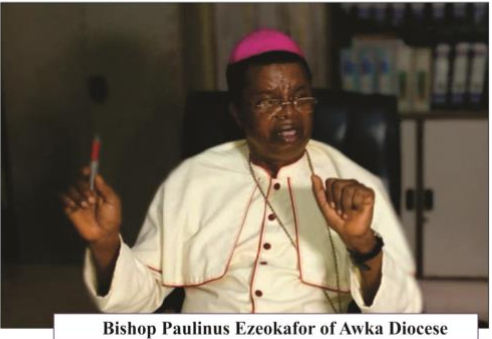 ‘We were at Peter University having a meeting with the Works Committee only for me to be informed that approval had been granted.

It was as if they knew we were there. We were there putting things in order in anticipation of the big news. No one thought that the news would come the way it came. We are very grateful.

‘It has been a journey of intense struggle. I want to specifically thank all those who assisted in one way or the other in ensuring that the project became a reality. I am very happy for the approval. People invested their professional expertise, lands and contacts.

‘This approval was as a result of human and material resources put into the project by various individuals and groups. My profound gratitude to all of you who have been working over the years to see to the building of the university and its approval,’ he concluded.

Bishop Ezeokafor said that now that the approval had been granted, there was need for more work and he exhorted all to brace up for the next phase, which, he said, was to ensure that an all-encompassing education was bequeathed to the students.

Reacting on behalf of the Catholic Diocese of Ekwulobia, the Chancellor of the Diocese, Rev Fr Law Nwankwo, described the development as an answer to the yearnings of students from the Southeast to get quality and affordable education which would be offered by the two dioceses that own the university.

He recalled that the idea to establish a university came up after the Peter Obi Administration handed over schools to the mission over a decade ago after the idea to train teachers, via the establishment of a teacher-training college, was first mooted.

He also recalled the period when about 50, 000 students from the Southeast took the Joint Matriculation Examination, with only between eleven and twelve thousand getting admission.

He said it was therefore thought that establishing a university to cater to the needs and aspirations of such students here would be appropriate. He described Peter University as an answer to those seeking quality and affordable education.

‘What has happened is not the end but only the beginning where the two dioceses will offer service to the community through the institution,’ Fr Nwankwo gushed, while expressing happiness at the approval of a project, which, he said, had been in the pipeline and had taken lots of resources.

For the Catholic Bishop of Nnewi, Most Rev Jonas Benson Okoye, the approval was a dream come through, noting that as the process had been on for a while. He said that close to ten years the diocese had been labouring to have the structures on ground and that the NUC Team during their last visit in July, were very much impressed with the quality of work that had been carried out.

He disclosed that the NUC Team, after the visit, advised the Peter University Team to commence the School of Nursing and Faculty of Law. Bishop Okoye said it was a good thing that the dreams were coming to fruition at the moment.

Bishop Okoye who was the Auxiliary Bishop of Awka Diocese at the commencement of the project, appreciated those who worked with him at the site, especially Fr. Charles Ogbuagu and John Umeojiako, saying that the priests of God would continue to do their work as church men.

He also expressed appreciation to all others who contributed enormously towards the actualization of the success; noting that people contributed collectively at parish level and individually, especially people who financed the construction of different structures.

He expressed optimism that the University, following the approval, would commence academic activities in no distant time.