All Things Work For Good To Those Who Love God” these were the words of His Eminence Peter Ebere Okpaleke after he was ordained Cardinal on Saturday 27th August 2022 by Pope Francis at St. Peter’s Basilica Rome alongside nineteen others.

“Cardinal” is the last and highest ordination a Catholic priest attains before becoming a pope. With his installation, Cardinal Okpaleke has joined the ranks of Catholic clergies that may someday become pope or be among those that will choose who becomes pope.

Other Nigerians who have attained this rank include Francis Arinze, John Onaiyekan, Anthony Okogie and Dominic Ekandem of blessed memory.

Born 59 years ago on March 1, 1963 in Amesi Community in Aguata Local Government Area, Anambra State, Peter Cardinal Ebere Okpaleke was ordained a priest in the Catholic Diocese of Awka on August 22, 1992.

Before his elevation as Cardinal, controversy had trailed Okpaleke’s appointment as Bishop of Ahiara Diocese in Imo State. Some clergy and lay faithful had protested his appointment because he is not an indigene. The situation forced him to resign which later made Pope Francis carve out Ekwulobia Diocese in Anambra and installed him as Bishop.

Regrettably, not only did his ordination and posting by Pope Benedict XVI as Bishop of Ahiara Diocese raise dust among priests and the congregation from the province, his consecration could not also hold in the Diocese, but, shifted to the Major Seminary of Ulakwo in the Owerri Archdiocese.

Not pacified, those that objected to his posting also prevented him, after his consecration, from entering the Cathedral to assume leadership of the Diocese. 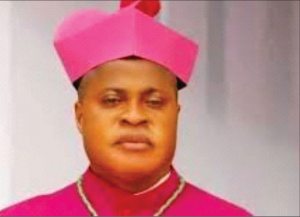 Worthy of note is that no law prescribes that priests must serve only in their province, otherwise, sending out clergy men on missionary assignments wouldn’t be necessary. Bishop Anthony Okonkwo Gbuji, the Emeritus bishop of Enugu Diocese is from Delta State, the Bishop of Benin Archdiocese, Augustine Obiora Akubueze is from Anambra State, to name a few. In horning home their rejection, some of the priests went as far as buying a coffin, and announcing the death and burial of Bishop Okpaleke.

The level of resistance by majority of the diocesans was not only shocking to both Catholics and non- Catholic faithful from outside the Ahiara Diocese, it has also, introduced a precedence that can be injurious to the gospel of the Church that preaches universality. The protests were led by majority of the priests in the diocese, including those in the diaspora. A source revealed that on the matter of who becomes Bishop, Ahiara priests are at each other’s throat.

Senator Rochas Okorocha, then governor of Imo State; Archbioshop Valentine Obinna of Owerri Diocese; Cardinal Onaiyekan, and others were among those that mediated in the matter without success. Cardinal Turkson was sent from the Vatican to speak with the dissenting priests, but like the others before him, he too was rebuffed. The priests were then summoned to the Vatican by the Pope, but, they remained adamant.

Although the clergies obeyed the order by Pope Francis 1, for the diocesan priests and deacons to personally within 30 days transmit a letter of obedience to the Vatican and accept the Bishop appointed for their diocese or be suspended, they continued to protest what they saw as marginalization of the indigenous priests.

Such order if disobeyed would have forbidden a priest or deacon from occupying any post or administering the sacraments, except for a priest hearing the confession of a person in danger of death.

Until one imagined the pains of a captain without a ship, or someone in an abusive relationship, we may not properly estimate how traumatizing the situation was for Okpaleke until his resignation on February 19, 2018 – six years after.

No doubt, he must have been disappointed with the attitude of his Ahiara brethren, but, what’s interesting about the man of God, is that, despite the protests, petitions, and the media razzmatazz, he remained focused and weathered the storm with joy.

We see his travail as a practical demonstration of the saying that “every disappointment is a blessing in disguise”. Just two years after his resignation, Pope Francis on March 05, 2020, appointed him the Bishop of the Diocese of Ekwulobia, a newly created diocese from Awka Diocese in Anambra State. And two years later, as a Cardinal Priest. His predicament at Ahiara diocese could have motivated interests to his pastoral works and views which were prerequisites to becoming a Catholic Cardinal.

In this Pope’s latest selection, all parts of the globe were represented, including new cardinals from Brazil, Nigeria, Singapore, East Timor, and others.

Sources from the Vatican believe that this spread is in line with Pope Francis’ determination to make the Church more inclusive, transparent and responsive to the needs of the poor and marginalized segments of the Church.

With the recent event, Pope Francis has chosen about two-thirds of the cardinals eligible to elect his successor if per chance he dies or takes a cue from his predecessor, Benedict XVI, by resigning. The age long tradition is that, when this happens a conclave of all cardinals who are under age 80 would be called to pick a successor.

Before the emergence of Cardinal Okpaleke, only Cardinal Onaiyekan, 78, by age was qualified to attend the conclave as Cardinal Arinze 90, and Okogie 86, are already above the stipulated age limit. Incidentally, by 2025 when Onaiyekan must have clocked 80, only Peter Okpaleke will represent Nigeria if the conclave is called, except in the event that other Nigerian clergies are installed before then.

Lessons can be drawn from Cardinal Okpaleke’s experience, especially for those facing disappointment and rejection.

In any case, rejection of priests, prophets, bishops is a fact of history. But it’s also a baptism that often conditions the true disciple. And Popes have never taken such rejection of their appointees lightly. Cardinal Olubunmi  Okojie was vehemently rejected by the faithful in Oyo Diocese, prompting his transfer to Lagos, at the death of the archbishop. The sort of insults heaped on Bishop Hassan Kukah in Sokoto has after all made him more respected.

When people reject priests for no fault of theirs, it is clear their reward will only be greater. The humiliation of Bishop Okpaleke may have prepared him for a princely office in his future career, as a priest.

In an interview with Vatican City News, Okpaleke spoke about how he received the news of his appointment and how his pastoral experiences contribute to inspiring him in his new role.

“We know that all things work for good for those who love God,” Okapaleke said, stating that he considered his own unworthiness and shortcomings. “By the grace of God, it has pleased the Holy Spirit working in the Church.”

According to Okpaleke, in spite of the difficult moments and the antagonism that trailed his appointment as Bishop, God granted him peace as he had never experienced before.

He said, “Jesus talks of this type of peace in John 14:27. Now, I know what Jesus meant; that he gives us peace; not the kind of peace that the world gives.”

“Ours is a providential God who, in spite of seeming confusion and randomness, directs history to his purpose and invites all to open themselves up and contribute their own God-given energies, insights, and talents to the Divine project of making the face of the Earth to reflect more clearly the Kingdom of God.”

With the new cardinals, the total number of College of Cardinals has now grown from 208 to 229.