Peter Obi: There Will Be No Bandwagon Voting – YPP’s Umeadi

The senatorial candidate of Young People’s Party, YPP, for Anambra Central, Dr Chinedu Umeadi, has downplayed fears that the popularity of the presidential candidate of Labour Party, Mr Peter Obi, will draw bandwagon votes for Labour Party and its various other candidates.

Addressing members of the Nigeria Union of Journalists, NUJ, Anambra State Council, last Thursday at Godwin Ezeemo International Press Centre, Awka, Umeadi said the personality of Obi and what Obi stands for will instead favour him, Umeadi.

Umeadi who is into his maiden voyage as a politician, said because Obi represented the youth of the nation, youths like him, Umeadi, would stand to benefit in the coming elections.

He also said that Nigerian voters had become wiser and more literate and thus would be able to vote individuals rather than parties, a development, he said, would favour him and his party.

Umeadi, who described Obi as a great man and a great citizen who was coming from a zone that had been marginalized in the country for long, said he expected all the other parties to have zoned their presidency to the South East, which, he said, was the only zone yet to occupy the country’s number one seat.

‘Obi is a movement and I’m going to be part of that movement.

Nigerians have become more literate and therefore will not emphasize on party but on the individual. I’m therefore not bothered about fears of bandwagon voting for LP,’ Umeadi stated. 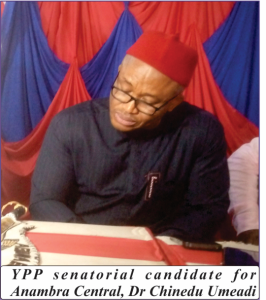 The budding politician said the country was in a shambles, with many sectors collapsing, and that the recycling of wicked leaders had put the country where it was. He said it was what he had come to change.

The Abagana-born medical practitioner said there was need to start from the base by doing away with what he termed nonsensical representation.

‘I will offer something very different. I will embark on needs assessment by getting to know what the various people want by meeting them, Umeadi said, while stressing the need to elect people with requisite qualification, academically and experience wise.

Positing that qualification could never be questioned,’ he described himself as a person of vast knowledge and educational attainment and promised to engage with youths at local, state and federal levels; even as he insisted on the need to have people of various ages on board.

On referendum and restructuring, he said the situation of things in the country tilted towards the need for a referendum, even though it was difficult to determine which was better.

He however argued that restructuring might appeal more to people in view of the situation of things in the country.

The YPP senatorial hopeful, while answering a question on why he left his comfortable position to dabble into politics, said it was not about him but about delivering service to people.

While noting that his foundation was already taking care of people through scholarships, he said he joined politics to reach out to those he could not reach as a private individual.

Umeadi assured that he was in the race to win and that his structure was formidable.