Peter Obi’s advent in the political horizon of Nigeria is synonymous with that of Biblical David who confronted Goliath of Philistine to stop him from ridiculing the Army of God, Israel. Although, a shepherd boy sent by his father, Jesse, to bring food to his elder brothers who were soldiers at war front,  David rebuffed Goliath, volunteered to represent Israel in personal combat, and vanquished the enemy. From then, God made him leader of Israel. Later, he became king and led Israel to victories to expand and consolidate their territorial integrity.

The nascent democracy from civilian government for Nigeria, began in 1999. The Army conducted election to enthrone civilian government and chose an anointed party, the Peoples Democratic Party (PDP), to succeed them. Ridding on the shoulders of the Army, PDP won the Federal Presidency and many State Government, with Anambra as one of them.

But the Governor of Anambra, Barr. Chinwike Mbadinuju (Odera), performed badly. No project was executed, not even roads, which were crucial for mobility. Workers and teachers were owed as there were no salaries for them. The starving workers and teachers went on strike, and schools and government offices were closed for the year 2002. The story coming from the Government was “Zero Allocation”.

This meant that Federal Government did not give Anambra her own share of Federal Allocation, because, Nigeria is operating Unitary System of Government where the Federal Government monopolized important sources of revenue, and so, is very rich and powerful, to the detriment of States.

As no money circulated from the Public Sector to the Private Sector, the people suffered. This quagmire was traced to the leadership of PDP who were said to have hijacked the allocations from Federal Capital, Abuja.

With Anambra being tossed furiously in the storm of bad governance, the virtues of sensitivity and patriotism of a young Igbo intellectual trader in Lagos, was motivated. He is Peter Obi, then 38, being born in 1961. He hails from Agulu, Anaocha Local Government Area, Anambra Central Senatorial Zone.

He posed the question: “Are we cursed, or are we the cause”? A graduate of Philosophy from University of Nigeria Nsukka (UNN); Banking/Finance and Master of Business Administration (MBA) from Lagos Business School; Economics from Harvard University, America; Peter felt that he had the intellectual capability, moral rectitude, honesty, accountability and transparency, to give good governance. He therefore threw in his hat into the ring for governorship contest. He joined the newly formed All Progressives Grand Alliance (APGA), for the race, in 2003.

But as PDP had antagonized the people with bad governance, the people swore to remove PDP in the 2003 election. But PDP who controlled the Federal Government, with Army and Police, bragged that whether the people voted for them or not, they must use “Federal Might,” to win.

They practicalised their boastings and rigged the election in favour of their candidate, Dr. Chris Ngige. Being denied of his rightful mandate, Obi challenged the false victory in the Election Petition Tribunal (EPT), and recovered the mandate from the Court, on March 15, 2006. He was sworn into office on March 17, 2006.

An acute problem that bedeviled financial solvency of Obi’s predecessors, was the encroachment of Motor Parks by the National Association of Road Transport Owners (NARTO), who confiscated the revenue and hired thugs to serve them. In his regime, Ngige sent Executive Bill to House of Assembly for legislative motions to remove them, but failed.

He sued them to Court, to use judicial powers to eject them but to no avail. When Obi came, he sent the Police to eject them. But the thugs chased the Police away. Obi reinforced the Police with Army, and the combined efforts of the Police and Army succeeded to chase them away, and Government recovered the Revenue from the Parks. On assumption of Office, various gangs of Private Army of Obi’s predecessors, confronted Obi and demanded settlement of N50 million monthly, as was done by his predecessors, because they were the Security Operatives of the State.

Obi replied that the police were the constitutionally mandated agency to work for security, and so, the Police must be allowed to do their work. The private armies boasted that they would make the State ungovernable for Obi. They unleashed terrorism, and terrified the people, as armed robbery aggravated. Obi reinforced the Army and Police to fight them. Obi assembled Patrol Vans and other necessary gadgets, including welfare packages for the security agents for dedication to duty. 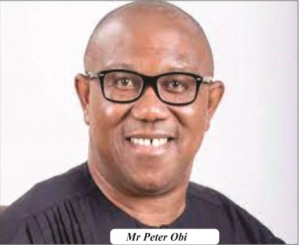 He invited the Inspector General of Police, Mr. Mike Okilo, to take deleverage in 2008. He sent “Executive Bill,” to the House of Assembly, to enact laws, of capital punishment, on armed robbery, and demolition of property used by the criminals as hideouts. In 2012, he assembled another numerous patrol vans and gadgets for the Police, and invited Inspector General of Police, Mr. Ogbonnaya Onovo, for delivery. Obi was the first Governor that assisted the Federal Government to equip the Police, optimally.

He sent Executive Bill to the Legislature for law to create Anambra Vigilante Group, from all Towns, under the training and Command of the Police, in Security Works. The present advocacy for State Security Agency or State Police, should be traced to Obi’s vision, sagacity and versality in good governance. When he came to office in 2006, he met the Motto of Anambra as “HOME FOR ALL.” He evaluated it as un-suitable, as it conferred the impression that the State is a dumping ground for all manner of people.

He sent an Executive Bill to the Legislature to change the sobriquet to :LIGHT OF THE NATION”, to prompt the people towards virtues and rectitude. Since then, Obi gave good leadership, characterized in honesty, transparency, accountability, prudence, patriotism, pragmatism, sagacity, magnanimity, modesty and humanitarianism, worthy of emulation.

In 2020, the “THISDAY NEWSPAPER”, evaluated the performances of all Governors in Nigeria, for one decade (ten years), 2010-2020, and evaluated Obi to be the best to merit “THE MOST EXCELLENT MERIT AWARD FOR THE DECADE”. It is certain that if Peter Obi becomes  President of Nigeria in 2023 by the time he finishes his tenure of eight years, history shall easily award him 2031 the honour of “THE BEST PRESIDENT SINCE INDEPENDENCE 1960”.

Obi implemented his laws against Armed Robbery in some places, among them Uli, Ihiala LGA, Oraifite in Ekwusigo LGA, Old Market Road, in Onitsha North LGA, to mention but a few. In fact, one of the notorious armed robbers, Evans, confessed that it was Obi’s war against criminals that chased him away from Anambra and he relocated to Lagos and other places.

The bad governance of Peoples Democratic Party (PDP) in Anambra, was precipitated and complicated with claims of supremacy between the Benefactor (godfather) and the Beneficiary (godson). The benefactor insisted to dictate to the beneficiary to enrich his pockets, but the beneficiary resisted them.

This degerated to burning of Government’s property in what they called “Mayhem”, because the benefactor wanted to render Anambra ungovernable, for the beneficiary, to induce the Federal Government to declare “State of Emergency” in Anambra, sack the Executive and Legislature, and impose an “Administrator”, whom the benefactor could chose at his quips and caprices. Government’s property burnt included the Governor’s and Deputy Governor’s Offices, House of Assembly, High Court, Anambra Broadcasting Services (ABS), Anambra State Independent Electoral Commission (ANSIEC), to mention but a few.

The Mayhem lasted from November 10-12, 2004. The burnt places remained a ghost environment for a very long time, and constituted environmental pollution. In December 2005, the then Governor, Dr, Chris Ngige, captured the burnt property, in the Budget of 2006, which he presented to Legislature, for approval. He tagged prices for renovation, to each of the items.

In the item of Governor’s Office, they put it as N245 Million (Two Hundred and Forty-Five Million Naira). When the Budget was passed in January 2006, by the House, Ngige, who was battling his Election case in Courts, did not have the resources nor time to implement them. The budget 2006, remained “Abandoned Project”, till March 17, 2006, when Obi came to office.

When Obi came to office on March 17, 2006, he identified vital projects to be given priority attention. Among them were the State Civil Service Secretariat, Awka, Central Bank of Nigeria, Awka, Sports Stadium, Onitsha, General Hospital, Onitsha, numerous roads at Urban and Rural Areas, etc.

He then invited the then President, Chief Olusegun Obasanjo, to flag them off. In his anxiety to receive Obasanjo at the Governor’s office, he embarked upon rebuilding the burnt office. He did it with “Direct Labour”, and refurbishment at a cost of N43 million (Forty-three million Naira). Obasanjo’s working visit was from October 12-14, 2006. Immediately Obasanjo left Anambra on Saturday, October 14, the Legislature convened “Emergency Session”, on Monday, October 16, 2006.

They moved motion for impeachment of Governor Obi, on October 16, and pronounced the impeachment on November 2, 2006. They installed the Deputy Governor, Mrs. Virgy Etiaba, as Governor. One of the items in their “Motion of Impeachment”, was that Obi renovated the Governor’s Office which they tagged in their Budget of 2006, as N245 million, without “Due Process”. When the case came to the Court, Obi proved that he followed the Constitution, which says that if a project did not exceed N100 million it could be executed by “Direct Labour”.

He said that he rebuilt, renovated and refurbished the Governor’s Office with N43 million (Forty three million naira), and so did not commit any offence against “Due Process”. The Lawmakers had wanted to influence the course of “Due Process”, approve the budget price of N245 million (Two hundred and forty five million Naira), for fraudulent enrichment of themselves. So, they became angry with Obi. The court dismissed their charges and described their allegations as “lacking in merit”. Obi returned to office on February 9, 2007.

When Obi returned to office, he formulated his “Economic Blueprint,” as “ANAMBRA INTEGRATED DEVELOPMENT STRATEGY” (ANNIDS), which was to develop all projects in Ministries and Urban and Rural Areas, simultaneously. He did so, that in his first term, in 2009, many development projects were visible and verifiable in both urban and rural areas, from various ministries.

So, in preparation for his second term election, he conducted “Facility Tours”, for many organizations, among them Nigeria Union of Journalists (NUJ), Nigeria Labour Council (NLC), Nigeria Union of Teachers (NUT), Church organizations, through their Laity Councils of Catholic and Anglican Churches, who saw things for themselves, and testified that Obi did well in First Term and deserved Secom Term. He won his re-election and proceeded to be sworn-in for second term on March 17, 2010.

It is relevant to mention that immediately Obi was sworn-in for his Second Term in 2010, the then President of Nigeria, Dr. Goodluck Jonathan, was so surprised and impressed that Obi, whose State, Anambra State, was not an Oil Producing State, as to be very rich with “Rights of Derivation of 13% Benefits”, could achieve such feats, of executing Capital Intensive Projects, invited Obi, to be a Member of National Economic Council, so that Obi could lend his economic and financial expertise, to the Federal Government. Next Edition shall highlight the numerous projects built by Peter Obi.