Following the recent appointment of Barr. Mrs. Nwando Obiano (Ph.D) as a Permanent Secretary in Anambra State Civil Service, the entire family of Dr. Edwin Obiano, KSM, alongside friends, well-wishers and top government officials organized a thanksgiving in appreciation to God for the elevation.

The thanksgiving Mass which was held on Sunday, August 1, at St. Theresa’s Catholic Church, Nibo, Awka South LGA, Anambra State, was an avenue for Barr(Mrs.) Obiano to appreciate God for the numerous accomplishments she had recorded as a civil servant and to share God’s miraculous deeds, guidance and protection upon her family. 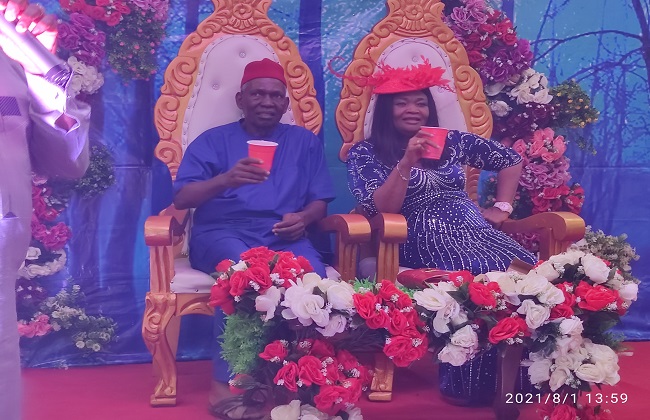 Leading in the thanksgiving Mass, the Catholic Bishop of Awka Diocese, Most Rev. Paulinus Ezeokafor, emphasized the need for people to give thanks to God at all times, saying that this opens the door for more blessings to be received by the giver, noting that it was only in giving that people receive.

In his homily, the Catholic prelate reminded the people that God wants them to worship him in truth and faith and not for material gains.

Bishop Ezeokafor frowned at some people who only remember God in times of difficulties and noted that as Christians, it is important to show appreciation to God for his blessings because whatever height or status one attains in life is possible only by the grace of God.

Speaking after the Eucharistic Celebration, the speaker of Anambra State Assembly, Right Honourable Uche Okafor, thanked God for the elevation, which he described as the highest position any civil servant can attain and attributed it to her dedication to work and humility even as he appreciated Governor Willie Obiano for encouraging hard work in the State.

Contributing, the State Head of Service, Barrister Harry Uduh, described the appointment of Mrs. Obiano as well-deserved, noting that hardwork, dedication and humility earned her the position. He advised her to keep the flag flying while praying God to sustain the success that she had attained.

In their goodwill messages, the Commissioner for Education, Professor Kate Omenugha, her Ministry of Justice and Environment counterparts, Barrister Uju Nworgu and Architect Mike Okonkwo respectively, as well as Dr. Maxwell Chinedu Ijomah said it takes resilience, confidentiality and persistence to duty for one to attain such position in the civil service and prayed God for more grace.

Reacting to the success of his wife, Dr. Edwin Obiano said that the elevation of his wife was an added blessing. He said he thought they had it all but God decided to add another status to their lives and described his wife as humble, loving and God-fearing, hence, the fruit they are enjoying.

While appreciating God for his blessings upon her family and for the promotion, the celebrant, Barr. (Mrs.) Obiano said that education is the bedrock of all successes and extolled Governor Obiano for the appointment.

The thanksgiving Mass was followed by a reception at Vertex View Hotel Nibo, chaired by the MD/CEO of the Anambra Broadcasting Service, Chief Uche Nworah (Ph.d), with many dignitaries in attendance including the state chairman of APGA, Sir Norbert Obi; former Head of Service, Barr. Mrs Ngozi Melifonwu; Knights and Ladies of St Mulumba (KSM), Amawbia SubCouncil and a host of others.

First son of the celebrant, Chief Tobenna Obiano (Ife Nibo) in his welcome remarks explained that the essence of the event was to celebrate their mother while alive and full of health. Highlights of the reception include cutting of cake, goodwill messages and entertainment of guests with quality refreshments.