God is wisdom personified. He created human beings in his image and likeness. In other words, we are divinely endowed with the virtue of wisdom. Unfortunately, we plunged ourselves into abysmal foolishness by ungodly behaviour. Personally, I was born on April fool’s day.

That does not make me a fool. By diligence, I became wise. Even if I am called a fool because of the date of my nativity, I am bold to say that I am not an ordinary fool, but a wise fool. Nature must allow God’s grace to work on it.

Often some human beings act as if they are senseless brutes. Few days ago, I drove to Awka for an important judicial engagement. Afterwards, I entered St Patrick’s Cathedral Awka at Zik’s Avenue for further crucial and ecclesiastical matters. After I was done, I set out for journey back to my pastoral home situated in a remote village. For obvious reasons, I drove down the road to Amawbia through Eke Awka Main Market.

Hardly did I know that I was heading towards traffic entanglement caused by mere impatience and stupidity. I was forced to halt automatically at a spot. From there I could see the Eke Awka roundabout. Then I saw a cluster of vehicles and tricycles in about six lanes. They all struggled for space and movement. It was impossible due to traffic disorder.

Since my car was at the tail end of the traffic stupidity, I tried to reverse. Unluckily another vehicle blocked me from behind. The driver sat like a statue in the flashy jeep with the glasses wound up as he was enjoying air condition in the midst of the hot afternoon weather. I gently stepped out of my pastoral vehicle and pleaded with him by signs, to draw back for me to drive back and look for an alternative route.

The man ignored me and my pleading signs. To worsen any meandering, he drove closer to my car and chained me at the spot. I sighed and went back into my vehicle. We stood at that spot for almost an hour before we started moving like wounded millipedes. 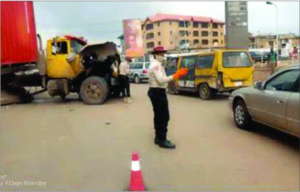 From my rear mirror I could view the stubborn driver behind me showing signs of restlessness. Indeed a child who does not allow his mother to sleep at night will also not sleep.

The man eventually tried to reverse and look for another route, but he was blocked from all sides. I saw him slapping himself. He was sweating like a local pig in the midst of the air condition. He was muttering some words, probably saying, “Had I known.”

Order is the first law in heaven. Disorder reigns in hell. Our country Nigeria is a disordered society. The vehicles and tricycles would have been moving smoothly if the drivers had queued up in one lane. Instead, they formed various lanes and blocked traffic movement.

Time and energy were wasted as the heat of the sun was scorching on everybody. This is real penny wise pound foolish. What does it profit someone to eat a plate of food valued at N1000 and later defecated an excreta worth N2000? Impatience has infected the blood system of many Nigerians. No wonder sudden deaths are the order of the day.

The other day, I saw a trailer driver driving at night with two-battery torchlight. He was holding the steering with one hand while flashing the torchlight with the other hand and driving at an uncontrollable speed. It was an eye-saw. I was driving from the opposite direction when I beheld the death for sale. To avoid being a victim, I cleared some distance away from the road for the torchlight driver to pass.

I was chorusing loudly, “God have mercy! God have mercy!!” If anything happens, he will blame God and not himself. Fatal accidents claim lives on our roads because many drivers behind the wheels are either insane or drunk. Common traffic rule stipulates: “If you drive, do not drink.

Avoidable fatal accidents occur more during the Yuletide Season because of rush and greed. Some commercial drivers move at unimaginable speed in order to make a return journey and earn more money. In the process they are involved in fatal accidents.

What is the essence of making more money and losing precious lives? Does the dead enjoy the money in the grave? At a sloppy highwa,y punctuated with dangerous bends, I saw an inscription which reads “Slow down. No overtaking. Many have gone!” Could you imagine that a crude commercial driver came along at an excessive speed and was making dangerous overtaking in a bid to make more money?

He ended up in a gully with himself and many passengers dead at the spot. What will he tell God at the judgment seat? As a result of his recklessness, many families were thrown into mourning. Have you not read along the way: “Someone needs you at home: therefore, drive with care.”

A certain married man was bitten brutally by his own dog due to mistaken identity. Out of self-defense and annoyance, the man inflicted a serious injury on the dog with a kitchen knife. Both the injured man and the injured dog were writhing in pains.

The wife of the injured man took the dog to hospital for medical treatment. After diagnosis the dog was given admission. Consequently, the woman looked after it in its sick bed. The injured husband was abandoned at home on self-medication.

Later the dog survived while the man died due to carelessness and lack of adequate medical care. The woman wept for being rendered a widow. Is her action of preferring the dog’s health at the detriment of her husband’s health not an act of penny wise pound foolish? Can she adopt the surviving dog as her husband?

Since Nigeria’s Independence from the colonial masters in 1960, we have been wallowing in political darkness and economic hardship due to bad leadership. Corruption and greed have strangled us. In 2015 the “Change” mantra was placed before our faces. Incidentally we voted for change and ended up in chain. Like the stubborn fish we have swallowed the hook hidden with enticed pleasure. The snake and its burden are now lying helpless.

Thus we are retrogressing instead of progressing. We have turned into monumental consumers instead of producers. The dividends of Democracy have eluded us in broad daylight. Our economy is becoming worse every day. To worsen the worse situation, insecurity of lives and property is the order of the day. We are killed like fowls here and there. Kidnapping and killing for money has strangled us.

The 2023 General Election is few days away. If we do not get it right this time, we shall go to blazes. If we sell our votes, then we have sold our consciences and we shall bear the harsh consequences. Vote buying leads to entrenching bad government. Not all that glitters is gold.

Therefore we must shine our eyes in 2023 and vote for good candidates who will take us towards the Promised Land. We should weigh and consider the antecedents of the presidential candidates before casting our votes. If we elect an incompetent president, then we shall be incapacitated for four or eight years.