He was born Edson Arantes dos Nascimento in the tiny Brazilian village of Três Corações, where he played soccer barefoot, using rolled-up rags for a ball. How a young man from such humble beginnings became Pelé, widely considered the greatest soccer player ever, is a story written on the hearts of generations of his compatriots and fans around the world.

It is a story told, too, in photographs that spanned decades — and that grew in luster and clarity as his legend did. 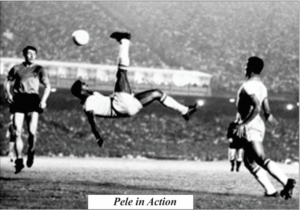 Pelé, who died` recently at 82, burst onto the world soccer scene as a skinny 17-year-old, scoring two goals in the 1958 World Cup Final, to lead Brazil to victory over Sweden.

He would go on to score 1,283 goals in his 21-year career, leading Brazil to three World Cup Championships and becoming recognizable worldwide for his unmatched skill and captivating smile.

Near the end of his playing career, he helped popularize soccer in the United States as a member of the New York Cosmos, leading the team to a North American Soccer League Championship when he was a wily 36-year-old. His style of play was so inventive that his passes often seemed to surprise his teammates.

The origins and even the meaning of the name, Pelé, are lost to history. But in these images, his genius as a player and his indescribable appeal are frozen forever in time.