”PDP, Igbo and Their Inevitable Divorce

The above topic, “PDP, IGBO AND THEIR INEVITABLE DIVORCE”, was midwifed by a great Journalist, Ike Abonyi, in his famous column, “POLITICAL MUSING”, Published in the New Telegraph” Newspaper, (Thursday, June 9, 2022, back page). My own follow-up is “PETER OBI IS BEST ALTERNATIVE”.

Ike Abonyi lamented the marginalization of People Democratic Party (PDP), to Ndigbo of South East Zone, who had demonstrated absolute loyalty to PDP, and grieving her bulk votes, to win elections in 1999, 2003, 2007, 2011, 2015, 2019, even without the zone getting slot in her Presidency or Vice Presidency.

He recommended for divorce by alluding to the adage, that: “When a Woman marries a second husband, she could evaluate them better”. He then reminded them of the possibility of getting a better suitor, politically, when he asserted:

“Legal experts who have been following the matter, and who have offered their opinion on it, believe that the marriage is most likely to be dissolved, because the duo have become incompatible. The injury of unfair treatment has become deep and penetrating to one of the partners.

Moreover, the judge would note that the mind of one of the families of the partners is already made up, especially, with the presence of, by the corner, of a better and more respectful suitor hanging by the side”.

Ike Abonyi offered candid advice on actualizing the divorce of PDP and Ndigbo by saying: “Because divorce on its own is the end of an error, it should be terminated now. If PDP and Ndigbo part ways it would only happen because there was no mutual respect. In every endeavour, politics inclusive, you cannot start the next chapter of your life if you keep re-reading the last one. Ndigbo just need to read the situation carefully and intelligently and come to the conclusion that they have arrived at the junction where they just have to take their destiny into their own hands.

Yoruba will not willingly give Igbo President, ditto Hausa/Fulani, not even the minorities will do it. So, why not carry your cross and see whether God will send Simeon along the way to help you carry the cross to reach Calvary. Was Goodluck Jonathan whom Igbos helped to reach the tilt not also involved in blocking Igbo interest?. Instead of crying for justice for Igbos, who suffered for him, was he not romancing with those who kicked him out and willing to be a tool to block Igbo interests?”.

Continuing, Abonyi asserted: “With all these variables, now is the time for Ndigbo to decide to be the heroine of their life and not to keep wearing victim garb which nobody looks at talk-less admiring. If you are in a system like ours, where nobody is concerned about the victim, it is better and wise to strive to be the victor. The year 2023 is the defining year for Ndigbo to determine their correct status in this contraption and an unnecessarily intricate climb called Nigeria”.

The Igbo have been victims of discrimination of some disgruntled elements of other tribes in Nigeria, for no just cause. Dr. Nnamdi Azikiwe (Zik), the political progenitor of Ndigbo was the first to taste the bitter pill of malicious discrimination of those people. He did not wallow in despondence but became the hero of the issue, as recommended by Abonyi. 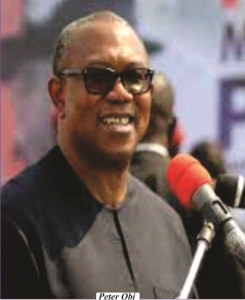 SPORTS: Zik was an ardent sportsman from youth when he was in Lagos as student and civil servant, before he left for America for further studies, in 1925. He returned in 1934. He settled in Ghana as Newspaper editor and participated in Sports as member of Accra Sports Club.

When he returned to Nigeria, and settled in Lagos in 1937, he aspired to participate in Sports and applied for membership of Lagos Sports Club, formed and dominated by Yoruba people. But he was debarred membership, and on enquiry, it was discovered that an un-written convention existed that no Igbo man would be given membership, no matter his position and popularity. Zik did not bemoan the malicious discrimination, but started his own Sports Club, called “ZIK’S ATHLETIC CLUB (ZAC).

He threw its membership open to all people, of all tribes, and became very popular in Lagos, and silenced the tribal club of Yoruba dominated. It spread its branches to many townships in Nigeria, in all the three regions of Nigeria, North West East. It produced the best sports men and women who represented Nigeria in National and International Sports Competitions.

POLITICS: The political parties that dominated Nigeria were the Nigeria National Democratic Party (NNDP) formed in 1923, by Herbert Macaulay (A Yoruba man), and the Nigerian Youth Movement (NYM)  formed by Ernest Ikoli An(Ijawman, Samuel Akinsanya, (a Yoruba man) in 1934. The NNDP, monopolized election victories to the Legislative Council and Lagos Town Council. But in 1937, Zik returned from Ghana and joined the NYM and his popularity re-enforced the NYM and they won election, for the first time in 1938.

But the NYM became ungrateful and envied Zik for dominating them with his intellectualism and popularity. Zik resigned his membership and the NYM became Moribund, just like the NNDP. In 1944, Herbert Macaulay courted Ziks’ friendship and they formed a truly national political party, the National Council of Nigerian Citizens (NCNC) in 1944.

At the subsequent elections to the Legislative Council, the people of Lagos, who have benefitted from Zik’s political sagacity, intellectual erudism, economic versatility, as many of them were in his employment in newspaper industry and sporting activities, voted for Zik as candidate of NCNC in 1947. After that, Zik’s party, the NCNC, continued to win elections in Lagos Capital Territory, and even in West (Yoruba), as was evidenced in 1951, but was sabotaged by Yoruba ethnic party, the Action Group (AG) with last minute carpet crossing, (defection). So, Zik had shown that when reactionary elements hindered the interest of Igbos, nay Nigerians, the Igbos can use their ingenuity and create alternative avenue, and still remain supreme.

So, the clarion call by Ike Abonyi, that Igbos should divorce PDP and join in political marriage with a respectful and suitable suitor, should not fall on deaf ears. Igbos should rally round themselves, now.

Of all the candidates produced by various political parties for the Presidency 2023, like Alhaji Atiku Abubarkar of Peoples Democratic Party (PDP), from North, Alhaji Bola Ahmed Tinubu of All Progressives Congress (APC), a Yoruba man, Peter Obi, of Labour Party (LP), a Igbo man, is the best. My analysis of Peter Obi’s supremacy of all shall come in subsequent editions. So, the Ohaneze Ndigbo should now do their work.

It is only now that they have got their candidates, that it is being speculated that the PDP, as a body, are lobbying to come to the South East to pick vice, or running mate to Atiku.

According to the story, they wanted to consult with Igbo prominent leaders, among them the oil magnate Prince Arthur Eze (Eze N’ Ukpo), Barr. Allen Onyema (Airline Magnate) and others. But it will be highly necessary, if the Ohaneze stick to their earlier warnings, and restrain any Igboman from accepting the position of running mate to Atiku  Abubaka.

The Ohaneze should  further, advise any other Igbo man in the presidential race, in another party, to withdraw from doing so. Example, Hon. Justice Peter Umeadi of All Progressives Grand Alliance (APGA), Prof. Kingsley Muoghalu of Social Democratic Party (SDP), to collapse their candidacy and join forces with Peter Obi in the Labour Party for the Presidency.

Any other candidate in any other party, for the Presidency 2023, should be dissuaded by Ohaneze. All hands should be on the deck to deliver Peter Obi, and surpass other ethnic groups, as Zik did to triumph over malicious ethnicism. The Christian population all over Nigeria, both in North and West, are supporters of Peter Obi, and they will all vote for Obi to win the Presidency in 2023.

It could be remembered that the All Progressives Grand Alliance (APGA), in total support for Goodluck Jonathan, in 2011, 2015, did not field a candidate for the Presidency. It is said that “Blood is Thicker Than Water”. IF APGA could do so for Jonathan in the past she can as well do more than that now, for Peter Obi.

It could also be recalled that in the North, Governor Tambuwal, stepped down for Atiku Abubakar, in their primary election. In the West, Governor Kayode Fayemi, also stepped down for Bola Tinubu. So, in the East, let Peter Umeadi and Kingsley Muoghalu, or another Igbo man, step down for Peter Obi for the final election.

At this juncture, I appeal to Senator Victor Umeh, who is no longer contesting for Senate, in APGA, to pick the form of Labour Party, and join the race for Senate in Anambra Central Senatorial Zone, and co-operate with Peter Obi, in the campaigns. It is gratifying that Senator Umeh had earlier endorsed Peter Obi as a capable Igbo man for the Presidency, judging from Obi’s performance as Governor of Anambra State 2006-2014. As Peter Obi is the best candidate for the Presidency 2023, so also is Victor Umeh, the best candidate for Anambra Central Senatorial zone.

When he was in the Senate, briefly in 2018, he was the most intelligent Senator of Igbo extraction, contributing to debates in the Senate, from all motions moved by other Senators.  He also moved intelligent motions as a law maker. Representation in the Legislature, is not only for looking for plump committees to belong to so as to get privileges to accumulate wealth for self aggrandizement. They should be intelligent, as well, to contribute to debates in law making.