Barely four months after they feasted on a maiden Christmas Party, the elderly priests of both the Catholic Diocese of Awka and the Catholic Diocese of Ekwulobia, were on Easter Friday, April 9, treated to a memorable dinner. It was on the occasion of an Easter Celebration and dinner, which a leading Anambra State Governorship Aspirant under the platform of PDP, Mr Valentine Chineto Ozigbo, sponsored for the priests.

The 2021 Easter celebration, which was held at the Awka Diocesan-owned Priests’ Welfare Home, GRA, Awka, was graced by bishops, priests and lay faithful from various walks of life. 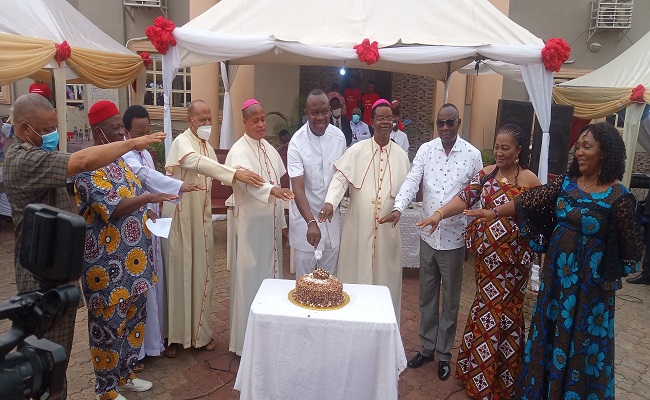 The bishop appreciated those who had been supporting the home in various ways for their goodwill.

In his homily, the Catholic Bishop of Awka Diocese, Most Rev Paulinus Ezeokafor, stressed the need for people to make out time, visit, care for, and encourage the retired and the old priests, as well as donate for their upkeep to enable them to be comfortable.

According to him, there was need for the laity to assist in the care of the priests who were no longer working in parishes, but instead were on retirement at the home due to old age and/or illness.

Bishop Ezeokafor commended many individuals and groups who had been visiting and supporting the home for their goodwill, urging them not to relent. He appreciated the anonymous donor that picked the bill for the recent repainting of the home for his donation.

In his address of welcome, the Director, Priests’ Welfare Home, Awka, Rev Fr Emmanuel Ifesinachi Udu, commended Mr Valentine Ozigbo for keeping his promise of sponsoring the Easter celebration for the retired and aged priests. He recalled that Mr Ozigbo had at the Christmas Party organized for the priests last December, promised to sponsor the Easter event.

On why he sponsored the celebration, Mr Valentine Chineto Ozigbo, while speaking to the press, said he had seen some of the priests incapacitated when he attended the December 2020 Christmas Celebration, and was moved to appreciate and celebrate the priests, who, according to him sacrificed their life and wealth of knowledge for the Church and humanity.

Recalling that he had five years ago celebrated the 60th Wedding Anniversary of his parents, Mr Ozigbo, who said he came from a family where longevity was celebrated, added that there was need for him to also celebrate the priests who according to him were the spiritual fathers the same way people celebrated their earthly parents.

Ozigbo, who said he was privileged and honoured by the presence of the two bishops, many priests, reverend sisters and the laity at the event, commended the members of staff of the home for the sacrifices they put in the care of the priests. He encouraged others to celebrate and support the aged priests across the various dioceses so as to be celebrated in their old age too.

The event featured the presentation and launch of the Music CD of Igbo Catholic hymns composed in the 1970s by one of the retired priests of the home, Rev Fr Simon Azuka. The music production was sponsored by the Principal Secretary to the Governor of Anambra State, Sir Willie Nwokoye.

Presenting the 10, 000 copies of the music CD which contained 41 evergreen Catholic hymns of Fr Simon Azuka, the sponsor, Sir Nwokoye, said it was part of his apostolate to support of the growth of faith and to immortalize the composer while he was still alive.

He announced his plans to also sponsor the Igbo Catholic hymns composed by the late Msgr Ezenduka, another great composer of the 1970s.