A People’s Democratic Party (PDP) frontrunner in the 2021 Anambra State governorship election, Mr Valentine Ozigbo, has hailed the contributions of the Nigerian workforce to the development of the country, describing them as immensely valuable.

In a statement issued from his Udoka Estate Campaign Office in Awka, Anambra State, on Saturday, May 1, 2021, in commemoration of this year’s International Workers’ Day, Mr Ozigbo regretted the unfair treatment workers received from government and employers in the country.

While acknowledging the resilience and dedication of Nigerian workers, Ozigbo, who is the immediate past President and Group Chief Executive Officer of Transcorp Plc, called for stronger labour laws that protected workers from abuses such as delayed payment of salaries, pensions and other entitlements. 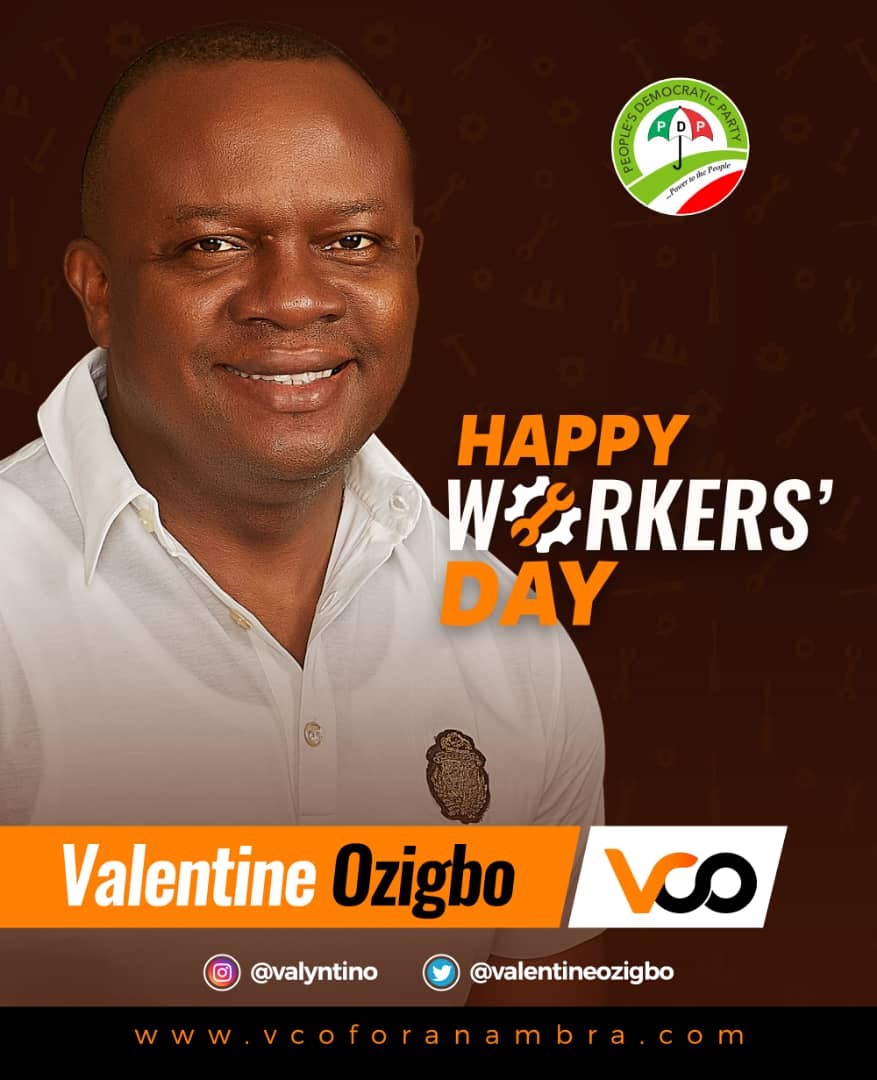 The respected business leader also outlined his ‘Ka Anambra Chawapu’ agenda to improve the lives of Anambra workers, pledging that if elected, he would be their strongest ally.

‘Nigerian workers deserve every commendation as we mark this year’s May Day to honour their contributions to the development of our nation,’ Ozigbo said.

The Anambra State governorship hopeful said despite the unfriendly work conditions of Nigerian workers, they had remained committed and dedicated to their role of providing services to the country and growing the economy.

‘Situations where workers are on unending industrial actions, denied their salaries when due, pensioners being owed and employers mistreating workers and trampling on their fundamental human rights, are grossly unfair and unacceptable to me.

‘Our National Assembly needs to unite in enacting labour laws that match the unique challenges of the 21st-century workplace.

‘I congratulate Nigerian workers and pray for more strength and courage to keep fighting the good fight for the nation,’ he said.

He stressed that investment in people was a critical component of his manifesto which he tagged, ‘Ka Anambra Chawapu Manifesto’.

‘If I am given the mandate to serve Ndi Anambra as their governor, I will immediately marshal out a plan to upskill and upgrade government workers.

‘Under my administration, workers will have a strong ally in Government House as their well-being and development will be a key priority.

‘We would integrate workers into the process of policy-making. As a result, workers will not be treated as adversaries to the government but as allies and partners in building a better and brighter Anambra,’ Ozigbo assured; even as he also promised to create the happiest workforce in Nigeria and restore the pride of the Anambra worker.

Ozigbo also charged workers to use the occasion of Workers’ Day to reflect on the nation state and come up with strategies on bringing lasting solutions to the issues that bedeviled the country.

Ozigbo, one of Nigeria’s most recognizable philanthropists who channels his charity work through his foundation, Valentine Chineto Ozigbo (VCO) Foundation, recently resigned from his seat on the board of Transcorp Plc and those of its subsidiaries, Transcorp Hotels Plc and Transcorp Power Limited, to focus on his next chapter in public service.