Few days after clinching the governorship ticket of the People’s Democratic Party, PDP, the victorious candidate, Valentine Ozigbo, has collected his certificate of return from the national chairman of the party, Prince Uche Secondus. The event which took place  last Wednesday at the National Headquarters of the PDP at Wadata House, Wuse Zone 5, Abuja, came as Ozigbo has promised to hit the ground running by building a consensus among all party members ahead of the November 6 election, report Jude Atupulazi and Ikeugonna Eleke.

Ozigbo, who is the immediate past President and Group CEO of Transcorp Plc, emerged as the party’s candidate for the November 6 election after polling the majority of the votes at the party primary held at Prof Dora Akunyili Women’s Development Centre on June 26.

At the brief ceremony, Secondus applauded the peaceful conduct of the June 26 guber primary of the party, describing it as one of the most peaceful processes in the history of the party. 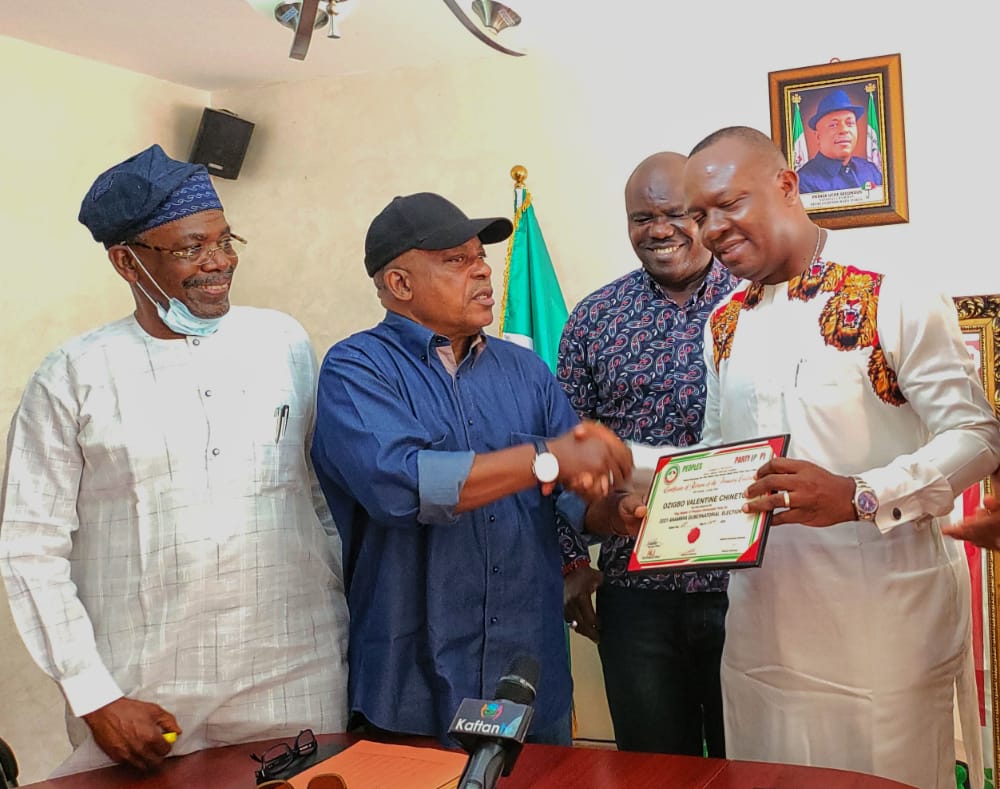 In his address, Ozigbo expressed gratitude to the leadership of the PDP for prioritizing the unity of the party and its chances at the general election. He urged other aspirants and stakeholders of the party to put the past behind and work together with him to ensure victory for the PDP over the incumbent All Progressives Grand Alliance (APGA).

His words, ‘Today, I stand before you to express my gratitude. When I started this journey, I said to everybody who cared to listen that I am on this journey because I believe in our party,’ Ozigbo said.

‘We have seen a commendable change in the leadership in the most recent years. I was fascinated by the remarkable shift we have witnessed under the leadership of Prince Uche Secondus.

‘The commendable leadership also extends to the state level. His Excellency, Peter Obi, other leaders and BOT members who have shown great leadership, I thank them,’ he added.

The business mogul also commended the electoral process that produced him as the candidate of the PDP, appreciating Philip Shaibu, the Deputy Governor of Edo State, and the entire electoral panel, for their professionalism.

‘We eventually went through the primary and by any measure, it was one of the most transparent and most peaceful. On that note, I want to appreciate the panel that conducted the primary, especially the Deputy Governor of Edo State, for the good work.

‘I am grateful for their fairness because it guaranteed that someone like me would emerge. I’m proud to tell you that I emerged through a free and fair process, compared to what is happening in other parties like APGA and APC,’ Ozigbo declared.

Ozigbo however reminded PDP that it was not yet celebration time and called for party unity and consolidation ahead of the November election.

Mr Ozigbo, former President and Group Chief Executive Officer of Transnational Corporation PLC, (Transcorp), it will be recalled, polled 62 votes out of the 218 votes cast in the governorship election primary held on June 26 in Awka.

16 aspirants went into the contest for the ticket of the party, but three of the aspirants; Barr Emeka Etiaba, Dr Tony Nwoye and Mr Chuma Nzeribe, stepped down from the contest.

The result was announced by the secretary of the PDP Primary Election Committee, as well as Deputy Governor of Edo State, Mr Philip Shaibu.

Immediately following his victory, many of the aspirants that ran against Ozigbo had congratulated him and pledged to work with him. Also the PDP Governors’ Forum threw their weight behind him in a press statement signed by Rt. Hon Aminu Waziri Tambuwal,

Governor of Sokoto State and Chairman, PDP Governors’ Forum, described his victory as a demonstration of his ability and capacity to take on other political parties and emerge victorious in the general election.

Charging him to forge common bonds, not only with his former colleagues who aspired to the same seat with him, but also with all leaders and stakeholders of PDP in Anambra State.

‘PDP has been out of power in Anambra State for 16 years, and it is the desire of the party faithful in Anambra to win again. It is time therefore to close ranks,’ the statement read, while assuring that PDP Governors’ Forum would support him in the struggle to reclaim Anambra State where, it said, the majority of people seemed inclined toward PDP.

Meanwhile, Ozigbo has promised to consolidate on his victory and the mandate given to him by building consensus within the party and fostering unity with co aspirants and all leaders at all levels to ensure a united PDP.

‘I will deepen my engagement with Ndi Anambra, listen to them, find out once again what they want and show them how I intend to serve. After all, this is all about service to the people,’ Ozigbo who said he would streamline and strengthen the campaign organization,’ stated.