Ozigbo Hails Ufudo on Donation of Complex to Church in Nnobi

Valentine Ozigbo, the People’s Democratic Party (PDP) candidate in the 2021 Anambra governorship election, was a guest of honour at the blessing and handing over of Sir Pius Ufudo Complex to St Theresa’s Catholic Church, Ifite, Nnobi.

The handover ceremony, which was held on Tuesday, April 19, began with a Holy Mass presided over by the Episcopal Vicar of Onitsha Archdiocese, Very Rev Fr Johnbosco Ezika, who represented the Catholic Archbishop of Onitsha, Most Rev Dr Valerian Okeke. 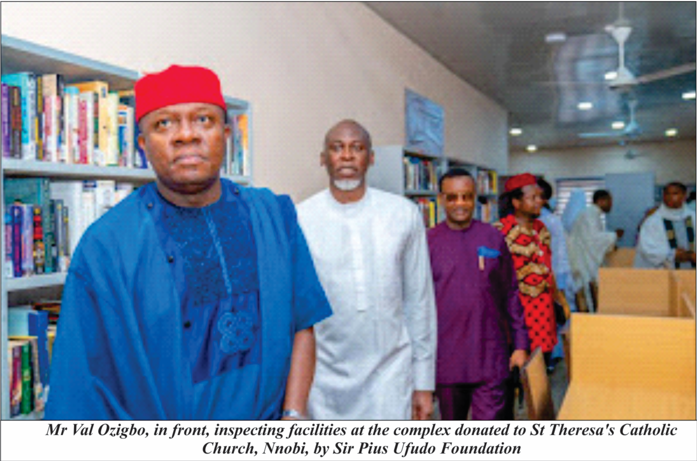 In his sermon, Rev Fr Celestine Umeh thanked God for the gift of the Ufudo family, recalling how the late Sir Pius Ufudo was a significant benefactor of St Theresa’s, Nnobi, during his lifetime. He went on to pray for God’s continued blessing on the family.

While making his brief remarks, Mr Obinna Ufudo, the chairman of Sir Pius Ufudo Foundation, thanked everyone who spared their time to grace the occasion.

Ufudo also announced that the foundation had set up an initial N50 million endowment fund that would be used to run the facility and fund scholarship schemes for select students, expressing his gratitude to those who contributed to the fund.

Ufudo, a Nigerian business mogul who was a former President and Group CEO of Transcorp Plc, recounted how his late father, Sir Pius Ufudo, always wanted to bring quality education to their home town, Nnobi, and stated his satisfaction at fulfilling that dream.

He specially thanked his mother, Mrs Caroline Nkem Ufudo, who was present at the event, for all her efforts to ensure that the project was never abandoned, even in the face of harsh economic conditions prevalent in the country in recent times.

While speaking to journalists later, Mr Ozigbo spoke glowingly of his bosom friend with whom, he said, he shared a long history, Obinna Ufudo.

Ozigbo and Ufudo are beneficiaries of the prestigious Chevening Scholarship Programme and have worked together in the banking sector for several decades. They have also both served as President/Group CEO of Transcorp Plc. In 2021, Ufudo was appointed as the Director of Finance for the Anambra PDP Governorship Campaign Organisation when Ozigbo ran for office.

‘I thank God for today. I thank you for the gift of this gentleman, Obinna Ufudo. I thank God for the Ufudo family, which has become my family, and I am happy at the powerful legacy they are leaving for the next generation,’ Ozigbo stated.

He said that when he ran for the governorship election, his Ufudo abandoned the USA, came down to Nigeria and stayed with him, Ozigbo, throughout his campaign.

‘That is why I am here to celebrate with him, and I am delighted to see that this project is a reality and will spark the beginning of many more,’ Ozigbo stated.

On the quality of the facilities in the complex, Ozigbo said it would help shape the minds of the young ones to be competitive in the modern world.

‘The environment we grow up and learn in has a significant influence on our lives. So I am thrilled that the children will be getting a lot of exposure and enlightenment from the school. I’m sure that St. Theresa’s will be an example for other schools in Nigeria,’ Ozigbo, a multiple award-winning global CEO, said.

Others were Hon Chukwuka Onyema, the lawmaker representing Ogbaru Federal Constituency in the Federal House of Representatives; Hon Obinna Chidoka, the legislator representing Idemili North/Idemili South in the Federal House of Representatives; Mr Tobe Okigbo, the Executive Director of MTN; Mr Nonso Okpala, the Group Managing Director/CEO of VFD Group; Hon Chuka Ezenwune, a member of the Anambra State House of Assembly; Chief Benson Oraelosi, an in-law to the Ufudos, and Hon Don Unachukwu, among others.