Out! Bishop Ezeokafor Sacks Those without Masks from Church

…Confirms 56 Seminarians in the Faith

A few members of the congregation had to stay in the open field to participate in the Holy Mass at St John Bosco Seminary Isuaniocha, February 13, as the chief celebrant and bishop of Awka Catholic Diocese, Most Rev Paulinus Ezeokafor, ordered them out of the church building for not wearing any protective shield against COVID-19.

Just after the Mass procession, the prelate appreciated the Bosco Seminary Management, led by the Rector of the school, Rev Fr Paul Mary Chukwukebe, and the congregation, for observing to near perfection, the COVID-19 protocols. He however frowned openly at the few who refused to wear any protective shield inside the church, despite all the prior announcements.

He asked them to leave the organized church building to the open space outside for the Mass in order to avoid exposing others to risk.

‘Any wise person must know that the COVID we are talking about is right here in our midst, with those we know too well being victims. It kills. But the good news is that we can stop the spread by doing very simple things that all of us can do to get it out of the way or still manage it. It pains to see some people still living in denial of the COVID and are endangering others,’ the bishop fumed. 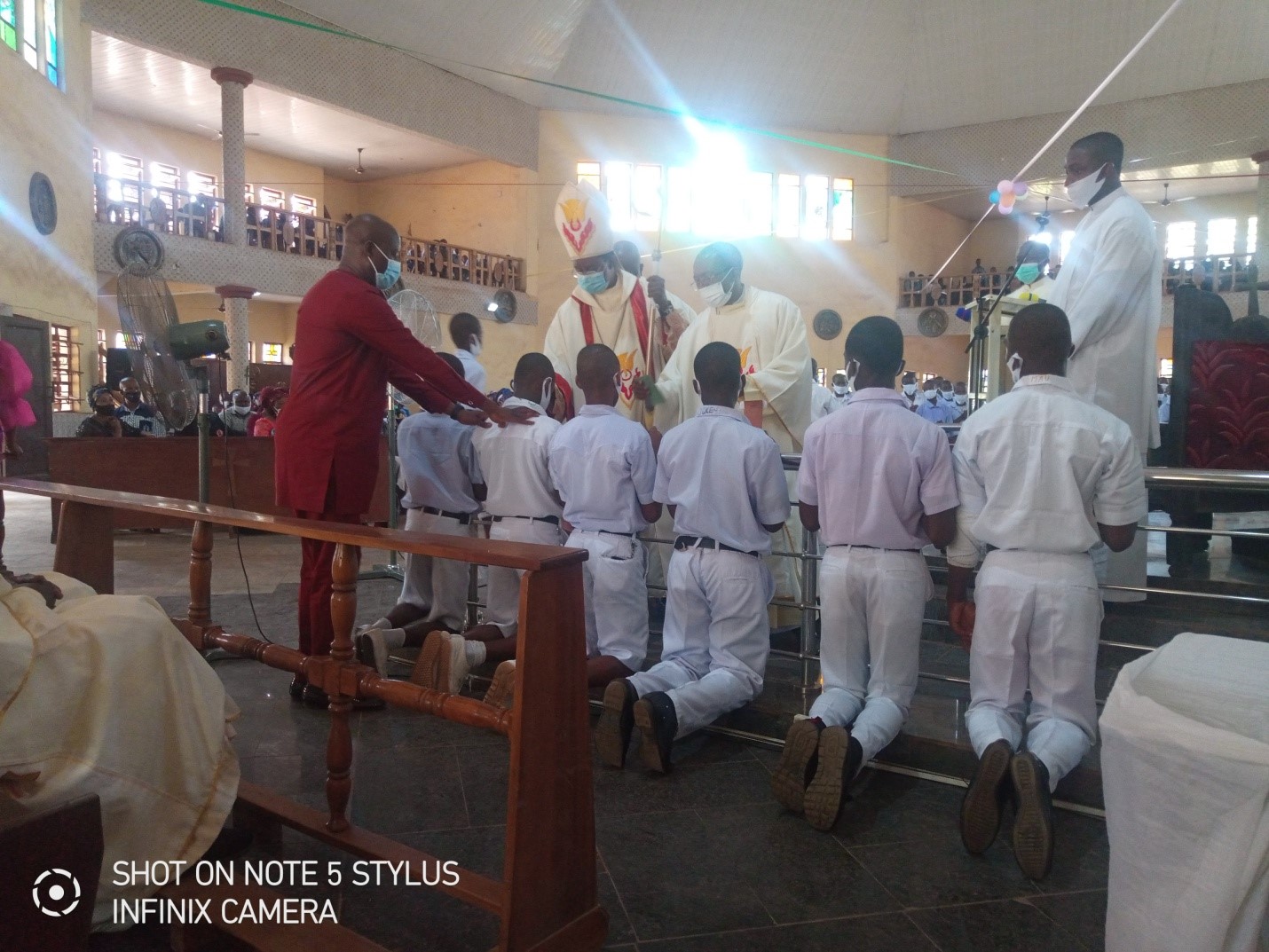 Bishop Paulinus Ezeokafor (standing 1st left facing the candidates) anointing the candidates for Confirmation at St John Bosco Seminary Isuaniocha, February 13, 2021. He was assisted by the Rector of the seminary, Rev Fr Paul Mary Chukwukebe. Dr Dominic Nwankwo was the godparent of the confirmed.

The local ordinary further appealed to the congregation not to observe the COVID rules just to evade the police or government, but as responsible citizens and Christians who had the duty to protect lives of one another. He enjoined all to join hands with the Church and government to practice the COVID’s simple rules of regular hand washing, use of sanitizers, protective masks, social distancing, isolating when necessary, and maintaining healthy lifestyle.

In his homily to mark the feast day of the Patron Saint of the seminary, St John Bosco, (whose actual day was January 31 every year), Bishop Ezeokafor urged the young seminarians to emulate St John Bosco in his doggedness and versatility that made him win a lot of young souls to God. He tasked the fifty-six seminarians who received the sacrament of confirmation to make the difference in the school by living a life of better commitment to spirituality and industry. He appreciated the chairman of the feast day celebration, Dr Dominic Nwankwo, who was also the godparent of those confirmed, for already constructing and donating a brand new standard volleyball court to the school, among other donations and services.

In his vote of thanks, the Rector, Fr Chukwukebe, extolled bishop Ezeokafor and Awka Diocese for their uncommon love to the seminary. He equally appreciated all the seminary supporters, especially Dr Dominic Nwankwo, for being extraordinarily committed to the welfare of seminarians.

Later in his address in the field, Fr Chukwukebe said the seminary priority, among other needs, was having a decent sports complex to accommodate the integral needs of the teeming number of seminarians ever since the school was upgraded from a three-class school to six.

In this regard, the chairman of the occasion, Dominic Savio-Bosco Old Boys Association, led by their president, Comrade Celestine Oguegbu, and BoT chairman, Barr Valentine Obienyem, as well as some others, took some of the sports projects.

The Chairman, Dr Nwankwo, himself an old boy of the school, in his speech said he owed what he was today to the training and formation he got from the seminary. He vowed to do all within his power and resources to give back to God what God in His mercy had given him.

In addition to the Volleyball court he constructed, he also took one badminton court among other donations. He implored others to always donate to the seminaries as the prayers of seminarians would always bring God’s favour.