It was the great St Louis Marie de Montfort who was quoted to have said “We never give more honour to Jesus than when we honour his Mother, and we honour her simply solely to honour Him all the more perfectly…” In that sense many parishes in Awka Diocese organize various programmes on or about the 15th of August every year to mark the Assumption of the Blessed Virgin Mary. 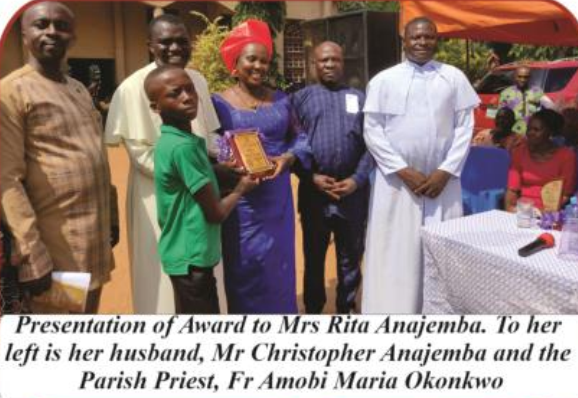 It was thus a joyful day of grand celebration at St Theresa’s Catholic Church Agulu as the entire parish including priests and religious, the Block Rosary Crusade, the youth, the Holy Childhood Association and indeed all the faithful joined hands to put up a colourful event last Sunday, to honour Our Lady’s Assumption.

At the head of the Eucharistic celebration to kick-start the event was Rev. Fr Patrick Ifewulu, an indigene of the parish, with the parish priest Rev. Fr Amobi-Maria Okonkwo and his vicar, Rev. Fr Cornelius Okoye concelebrating. During the Mass, various centres and zones of the Block Rosary Crusade in the parish took turns to present offerings to God in appreciation.

The reception which followed after the Mass at a well-decorated arena in the church compound, was chaired by Ambassador John Mary Ibeka, incidentally of the four persons honoured with an award at the occasion. 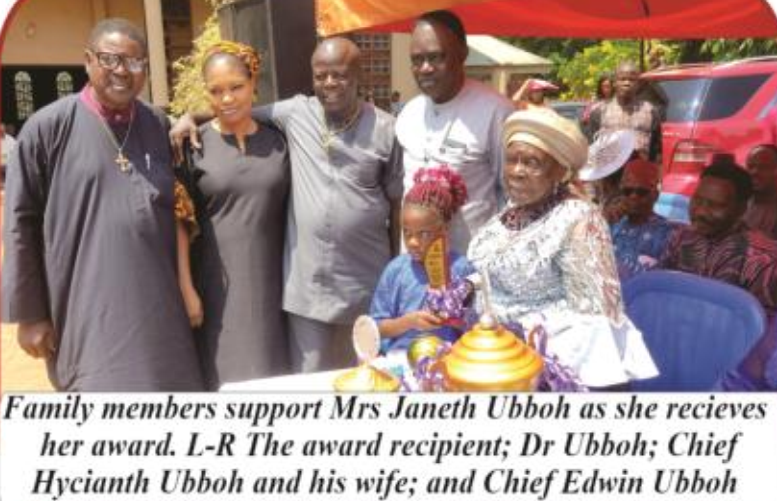 A welcome address presented by Chioma Onyekwelu, president of the parish Block Rosary Crusade highlighted the essence of the Solemnity of the Assumption which is based on the teaching of the Church that Mary was taken up body and soul into heaven at the end of her earthly life, since God had promised never to allow the sinless mother of His Son to suffer decay or corruption.

The president equally used the medium to solicit material and financial supports to procure uniforms and altar materials for Block Rosary centres in the parish.

While welcoming all guests to the occasion, the visibly elated parish priest, Fr Okonkwo cited personal experiences instrumental to his becoming a Catholic priest, which he credited to the miraculous intervention of the Virgin Mary. He further appreciated his vicar, Fr Okoye, the seminarian on Apostolic work Anthony Dim, leaders of the Block Rosary at the parish and centre levels, for many weeks of serious preparation, culminating in a successful celebration. 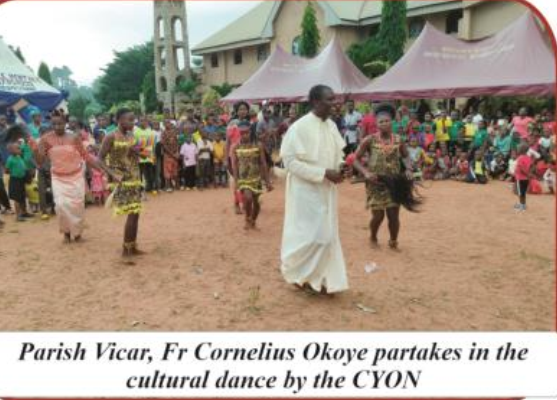 The occasion also featured awards of recognition to deserving members of the parish either as patron or patronesses of the Block Rosary namely: Ambassador John Mary Ibeka, a devout slave of Our Lady and the director of JMI Group; Mrs Janeth Ubboh, an elderly mother known for praying with and organizing the Block Rosary for many years; Mrs Rita Anajemba, former president of the Catholic Women Organisation and a coordinator of the Holy Childhood in the parish; and Mrs Rita Anonye, also a devout animator of the Holy Childhood . The awardees, assisted by the priests and representatives of the Block Rosary, jointly cut the Assumption Cake in honour of Mary Mother of God.

Competitive presentations at the event include March past which was won by Regina Pacis Centre; choral renditions won by Gate of Heaven Centre; quiz also won by Gate of Heaven; fashion parade in which Miss Chioma Onyekwelu of St Francis Zone came first; and youth volleyball competition won by Ukunu village.

In separate interviews with Fides, Chief Hyacinth Ubboh, son of one of the awardees; Mrs Rita Anajemba and Ichie Ubboh were all delighted to identify with any course of the Blessed Virgin Mary, whom they described as the surest link to obtain favours from God. They encouraged Block Rosary members and indeed all Christians to fervently pray the Rosary daily.

Generous donations from awardees, their families, friends, associates and other guests in support of the Block Rosary and various projects going on in the parish accounted for raising more than Two Million Naira at the occasion.