The initiation of Lady Ugorji, the wife of Sir Anthony Ugorji, popularly known as Okigbo Mbem, came few months after the Ozo Nri Traditional Society initiated her husband into the respected group as a result of his disposition and conduct in the community.

Fides gathered that Lady Ugorji’s membership into the Otu Odu Society of Nri (Iyom) would provide the needed opportunity to contribute in issues affecting women and assist them to become better positioned in society. 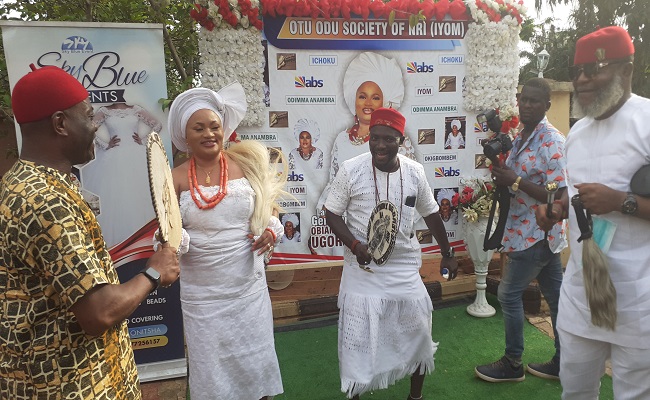 Speaking to Journalists, Lady Ugorji, thanked the leadership of Otu Odu Society of Nri Community for considering her fit to become a member of the prestigious group. She vowed to contribute her intellect, resources, time and energy to ensure that the group reaches out to more people and intervene more in issues affecting women, in order to find lasting solution to the issues.

She revealed that the membership into the Out Odu Society required discipline and maintained that all aspects of her life would be more disciplined in line with the guiding principles of the new group which she has assumed a member of.

Lady Ugorji who is a Lady Auxiliary of the Knight of St. John International, maintained that by her initiation, she has become one of the key custodians of Igbo culture and tradition, noting that the position would make her more responsive to the affairs of women in the community.

She noted that the group required members to act in an honourable and discipline manner, saying that her conduct would never bring shame to the group.

Also Speaking, the Special Adviser to Anambra State Governor, Chief Willie Obiano on Events and husband of the celebrant, Sir Anthony Ugorji, while congratulating the wife, expressed conviction that she would function effectively as an Iyom and would bring glory to the Otu Odu Society. He said that the initiation would empower the wife to reach out to more women.

He thanked the Anambra State Governor, Chief Willie Obiano for the platform which was given to him to excel and noted that the platform opened up an avenue which he used to develop relationships with other top personalities in the State. He thanked his friends for honouring the invitation and described such a great honour to his household.

He said that the initiation was an indication that the family has great respect for the tradition of the land and would assist in projecting the cultural heritage of ndigbo. He expressed optimism that the Iyom title would complement his ozorship title.

The event attracted notable individuals within Anambra State and beyond such as, Member Representing Anaocha/Njikoka/Dunukofia Federal Constituency, Hon. Dozie Nwankwo, the Chairman of Anaocha LGA, Hon. Estate Onyegu and many others who came to celebrate with the family of Sir Anthony Ugorji.