The Anambra State Ministry of Women’s and Children’s Affairs is planning to take custody of the three children rescued from a prophetess in Onitsha recently where they were held captive and believed to be awaiting their turn to be killed before being pounded in a mortar for ritual purposes.

It will be recalled that three kids, two boys and a girl aged six, five and three years, respectively, were rescued from one Rejoice Raymond and her aged mother, Chidi Felicia Nwafor, on the 19th of February this year, after a police raid on their house at the 3-3 area of Onitsha, following a tip off. The aged woman was said to be a prophetess.

The three children were found naked with their hands and legs tied, as the women were alleged to pound captured kids in a mortar for ritual purposes.

During her visit to the hospital where the kids were taken to, the Commissioner for 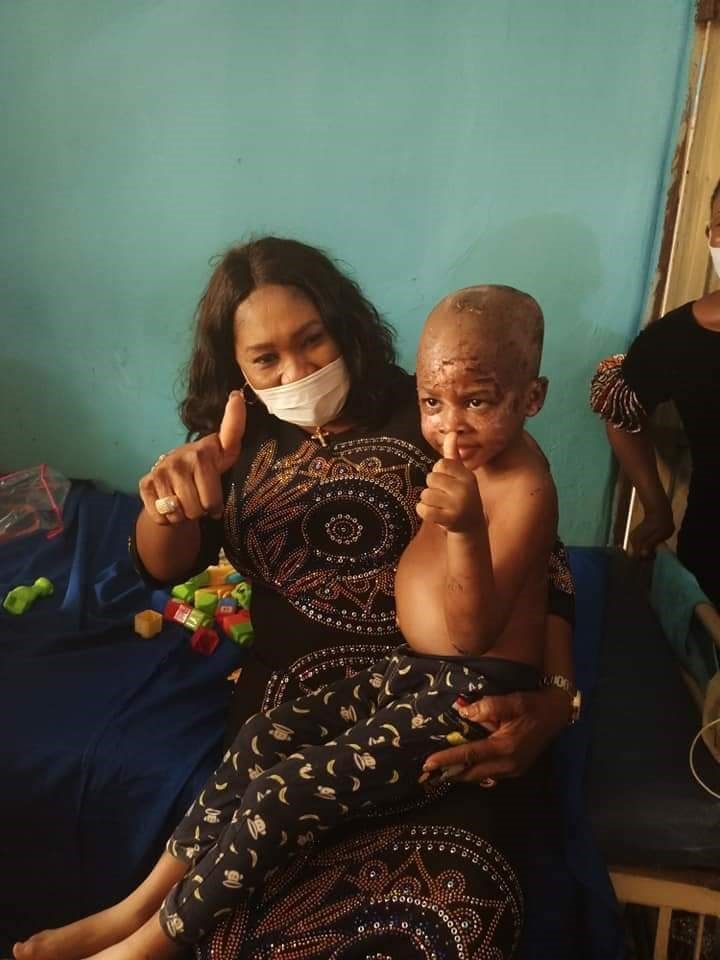 Commissioner for Women’s and Children’s Affairs, Lady Ndidi Mezue, cuddles one of the three rescued kids from a house in Onitsha.

Women’s and Children’s Affairs, Lady Mrs Ndidi Mezue, reportedly broke down in tears on seeing the condition of the kids.

She had expressed shock at what she described as the level of inhuman treatment the children were subjected to, with scars and bruises decorating their bodies.

Now the commissioner is planning to take custody of the kids by having them transferred from Onitsha to a hospital in Awka where she, said, they would be better cared for.

Speaking on the phone with Fides, Mrs Mezue said her ministry had applied to the deputy commissioner of police in charge of the matter to have the kids transferred to Awka, while government awaited the conclusion of police investigations into the matter before embarking on the next course of action.

The commissioner said one of the kids required surgery in one arm and said it was one of the reasons her ministry wanted to take custody of the kids.

Fides gathered the kids were beginning to show improvements in their physical condition, save the girl among them who was said to have sustained a fracture.

The commissioner said that with the case now transferred to the State CID, Awka, it would now be given accelerated hearing; even as she vowed that all those involved would face the full wrath of the law. She said that a nurse was presently attending to the kids at their undisclosed hospital in Onitsha; while enough clothes and other items had been provided for the kids.