The member representing Orumba South Constituency in Anambra State House of Assembly, Honourable Emma Nwafor, has inaugurated his campaign council for his re-election for the forthcoming 2023General Elections.

The seventy-four-man council was inaugurated at Ezira, the country home of the legislator, during his meeting with his constituents.

Inaugurating the council members who were drawn from all the wards that make up Orumba South Constituency, the Transition Committee Chairman of Orumba South Local Government Area, Chief Neville Uchendu, charged them with the responsibility of ensuring victory for the All Progressives Grand Alliance, APGA and Honourable Nwafor in every polling unit across Orumba South Constituency during the 2023 polls.

Chief Uchendu advised them not to compromise their responsibilities while discharging their duties at their wards and polling units, expressing confidence that members of the campaign council were men of proven integrity with the capacity to secure victory for APGA in the constituency.

In his remarks, the Director General, Honourable Emma Nwafor Campaign Organization, Chief Cyprian Okereke, assured that they would work assiduously to return Honourable Nwafor to the Anambra State House of Assembly as he had done exceptionally well to deserve a second tenure. 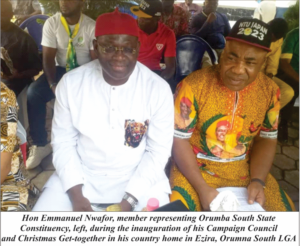 Addressing the gathering, Honourable Nwafor explained that for the past three years and few months he had represented Orumba South Constituency, he had empowered many of his constituents through various empowerment programmes, awarded scholarships to hundreds of students, embarked on free medical outreach, as well as built a bungalow for Mr. Ikechukwu Anah and his family at Ururo Umunze.

The legislator went further to say that he also built an examination hall and security post for Victory High School, Ezira among others, to deserve a second term in office.

Later, Honourable Nwafor distributed bags of rice to his constituents for Christmas Celebration.

The former deputy governor of Anambra State, Chief Emeka Sibeudu, and the immediate past Commissioner for Housing and Urban Development, Architect Michael Okonkwo, were among the dignitaries that graced the occasion.