The member representing Orumba South Constituency in the Anambra State House of Assembly, Engr. Emmanuel Nwafor, has played host to his constituents in celebration of the victory of the Anambra State Governor-Elect, Professor Chukwuma Soludo, in the just concluded Anambra State governorship election.

Engr. Nwafor hosted the victory party at his country home in Ezira, Orumba South LGA, Anambra State, on Saturday, December 4, to appreciate members of the All Progressives Grand Alliance (APGA) in the area for voting massively for defending their votes without giving any room to the manipulation of election results, even after the heavy financial inducement from opposition parties.

Fides gathered that the celebration which featured special Christmas renditions from the Christ the King Chaplaincy Choir, Umunze, to enliven the ceremony, witnessed the empowerment of Ezira Ward chairman, Mr. Emmanuel Udorji, and Udo na Uganiru group with shuttle buses, for standing with APGA during the gubernatorial election by the House member.

Fides observed that the House member equally empowered his supporters known as Equity Group with a motorcycle for what he termed their steady contributions and vigilance during the election that amounted to what he described as the outstanding success recorded by APGA.

Addressing APGA faithful in Orumba South Constituency, Hon. Nwafor described the victory of the Anambra State Governor-Elect as a reflection of the people’s will and maintained that APGA  had delivered the  dividends of democracy through its various human oriented projects.

Honourable Nwafor who was full of gratitude to God for crowning Professor Soludo with victory in the just concluded governorship election, expressed appreciation to his constituents for voting massively for APGA in the gubernatorial election. 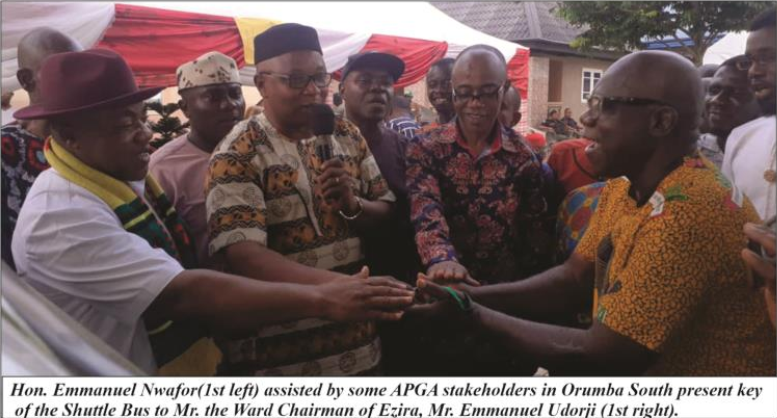 The lawmaker noted that Ndi Anambra made the right choice in the Governor-Elect, Professor Soludo, whom, he said, would justify the mandate given to him by the people as a result of his antecedents and previous achievements. He noted that the Governor-Elect came prepared for the office.

Hon. Nwafor, who serves as the Chairman, House Committee on public Utilities and Water Resources in the State Assembly, commended Governor Willie Obiano, President Muhammadu Buhari and security agencies, for ensuring that the election was peaceful. He also hailed the Independent National Electoral Commission (INEC) for being neutral in the exercise.

He further thanked the political appointees, stakeholders and party officials of Orumba South, as well as those whom, he said, remained and fought with the party during the just concluded Anambra governorship election, for standing firm for the APGA Government. He assured them of good representation and  continuous dividends of democracy.

In his remarks, the former Deputy Governor of Anambra State, Chief Emeka Sibeudu, thanked the people of Orumba South Constituency for complementing the good work of Governor Obiano in the state by electing Professor Soludo as his successor and thanked Hon Nwafor for organizing the ceremony. He described the House member as a people oriented leader and urged him to continue with his all-inclusive representation.

In their separate speeches, the Commissioner for Housing and Urban Development, Architect Michael Okonkwo, and Professor Steve Ibenta of Nnamdi Azike University, Awka, also said the victory of APGA in the Anambra governorship election was orchestrated by what they termed the spectacular performance of Governor Obiano in office and expressed confidence that the Governor-Elect, would live up to expectations.

The Chairman of all Soludo Support Groups, Orumba South, Dr. C.C. Okoli, extolled Nwafor for his continuous true representation and right projection of APGA in the area. Noting that the reward for good work was more work, he said that Ntu Japan’s second tenure would be a walk over.

For his part, the acting Chairman of APGA, Orumba South, Hon Benjamin Obunne, with other party faithful and stakeholders who graced the event, described Hon Nwafor as a thorough democrat and a grassroots leader who knew and understoond the needs of the common man. They thanked him for his good work in Orumba South and assured that his second tenure would be their own responsibility.

Speaking to Fides, the Ezira Ward Chairman, Mr. Emmanuel Udorji, who was empowered with a shuttle bus for standing firm with APGA when the storm of defections and pressures was high on him from his fellow colleagues, thanked the lawmaker for his benevolence, promising to use it judiciously to drive the message of APGA to the entire Orumba South Constituency.

Distribution of over 500 bags of rice to indigent widows of Orumba South, stakeholders, political appointees, the women’s President’s General of Orumba South, Udo na Oga n’iru Wing, APGA executives, among others, were the highpoint, of the celebration.