As the elections for the Nigeria Union of Journalists, NUJ, Anambra State Council draws near, permutations and politicking as to who becomes the next Union’s chairman are on.

The election which is scheduled for January 19 will no doubt come with its intrigues and alignments in producing a candidate that will give the hallowed profession a Midas touch to bring back the glory days of the profession.

Speaking of candidates, and their potentials to rebrand the union into enviable heights, Comrade (Sir) Mmaduabuch Onwumelu comes readily to mind.

Mmaduabuchi Onwumelu, a native of Uruegbu Village Umuoji, in Idemili North Local Government of Anambra State, is a trained and practicing journalist that has at all times been in the field and who understands the many plights faced by journalists in the state. 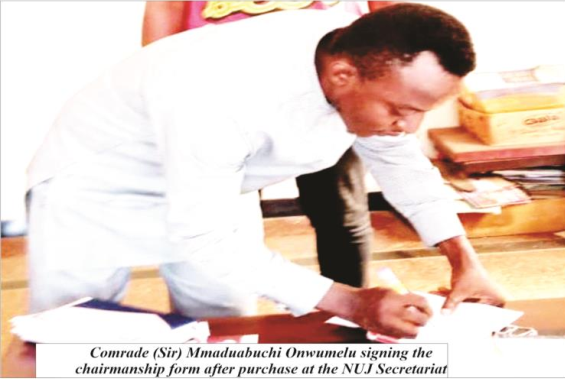 Onwumelu is a graduate of Nnamdi Azikiwe University, Awka, where he obtained his Postgraduate Diploma in Journalism. He also has a degree and certificate in Political Science and Education from the Enugu State University of Science and Technology (ESUT) and African Thinkers Community of Inquiry College of Education, both in Enugu State.

His excellent performance over the years as a journalist, teacher, public affairs analyst, leader and social media influencer, has earned him a mark of being the rightful candidate for the job.

Having a long history of award recognitions will no doubt put journalism in Anambra to enviable heights if he is given the chance. The plethora of awards not just in the field of journalism but also in the Catholic Church, where he is a member of the ancient and noble order of Knights of St John International (KSJI), will boost his rating as a popular personality.

With his impeccable dexterity and passion in the field, Onwumelu has the capacity to handle the position well. Like it is always said, he who the cap fits should be allowed to wear it.

For the past 12 years, Onwumelu has been engaged in media practice and developmental journalism in Nigeria, particularly in Anambra State. He is a senior editorial staff of Fides Media Limited – publishers of Fides Newspaper.

He is an active member of the Nigeria Union of Journalists (NUJ), where he has served in various key committees at the state level and was until recently the Treasurer. He has proved his capacity in all the tasks assigned to him by the past and present administrations.

He saw to the inauguration of Fides Media as a chapel under NUJ and subsequently served as its pioneer chairman.

A towering achievement of Comrade (Sir) Mmaduabuchi Onwumelu is his successful establishment and effective administration of a virtual platform called Media Practitioners Only which brings together all media professionals in Anambra State and beyond. The platform is now over 7 years old and is easily the most vibrant online rendezvous for media workers in this part of the country.

For initiating the platform, media practitioners in Anambra State came together in May 2015 to honour him with a rare award for his creative ingenuity. Virtually all journalists in Anambra State have benefited directly or indirectly from Comrade (Sir) Mmaduabuchi Onwumelu’s resourceful and public-spirited disposition.

Given these undisputable feats attained by Onwumelu, his readiness and his burning desire to resuscitate Anambra NUJ to a better standard, not a few members of the Union believe he should be given a chance to pilot the affairs of the union and do more.

In his words, ‘With me, the core need of the union in the areas of welfare and professional practice will be at the centre of my stewardship.

‘Journalists around the state should, for the interest of what I profess, give me a chance to change the status quo.’

Indeed, Onwumelu has been tested, not once or twice, and has succeeded in delivering the job.

His mandate remains to create a working system that will better the lots of journalists and journalism in Anambra State.