Only Rigging Can Stop Obi – Ezeife

Unless the 2023 Presidential Election is rigged, the candidate of Labour Party, Mr Peter Obi, will emerge victorious. This was the submission of a former governor of Anambra State, Dr Chukwuemeka Ezeife, who predicted a total victory for  Obi, ahead of the February 25 General Election. Ezeife insisted that only rigging could stop Obi from becoming the next president of the country.

He stated this on Monday,  ahead of last Tuesday’s rally by the Labour Party candidate and his running mate, Senator Ahmed Datti, adding that he was sure that Nigerians knew Obi was the best among all the presidential candidates running for election.

‘I am earnestly looking forward to the day Obi will be sworn in as Nigeria’s President. That day will mark the beginning of Nigeria’s return to the part of glory.

‘Apart from rigging, I would say that nobody else is contesting this election with Obi, inasmuch as I know that some other candidates have so much money at their disposal.

‘All powers belong to God. And our God can stop every rigging and I see the hands of God in the Obidient Movement and I thank all Nigerians for thinking right this time around and I must say that all glory is to our God.

‘By God’s grace, there will be an election this February. There will be no interim government and the result of the election is predictable. 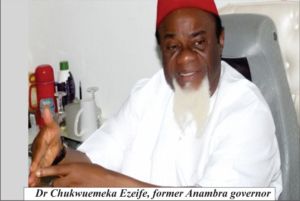 ‘In fact, I can’t wait for that day, May 29, this year, when Obi will be sworn in. But if I had my way, why not bring the swearing-in date down to March or April, instead of waiting till May which is three months far away from the February Election?’ Ezeife asked.

Obi, who was in Anambra State as part of the continuation of his nationwide rally last Tuesday, met with traditional rulers at the Government House, Awka. According to the Head, Media and Publicity for the Labour Party Campaign Council, Mr Titus Obasi, over 180 support groups carried out a solidarity march in Onitsha for last Tuesday’s rally.

Speaking ahead of the rally, the leader of Peter Obi Express Media, Mr Caesar Obidile, had said that about five million supporters would be coming to Anambra.

His words, ‘We are ready and we are in full spirit because this is his home and all the support groups have mobilized enough and we made enough arrangements for welfare and security,’ he said.

Also speaking ahead of the rally, the Director Obi/Datti Campaign Council in the state, Mr Joe Martins Uzodike, noted that the rally was part of the consultations and awareness campaign for the candidate and his running mate.

‘It is going to be the mother of all rallies and this one is that the candidate is coming home to talk to his people and we have made all the necessary arrangements to ensure a hitch-free campaign rally in Anambra State.

‘The meetings with the respective bodies are part of the process and our candidate has great respect for the youths who are represented by the Nigerian students, as well as the traditional institution represented by the Anambra Council of Traditional Rulers,’ he had said.