The People’s Democratic Party, PDP, governorship candidate in the last election in Anambra State, Mr Valentine Ozigbo, has been honoured by the prestigious Onitsha Business School, with the institution naming its research centre after the respected business leader.

Prof Olusegun Sogbesan, the Founder and Chairman of the Governing Council of the Onitsha Business School, made the historic announcement at the institution’s 7th Vision Anniversary/Graduation Ceremony held on Friday, March 23.

While making his remarks at the elaborate ceremony, Prof Sogbesan announced that the new research centre would be named the Valentine Ozigbo Research Centre. 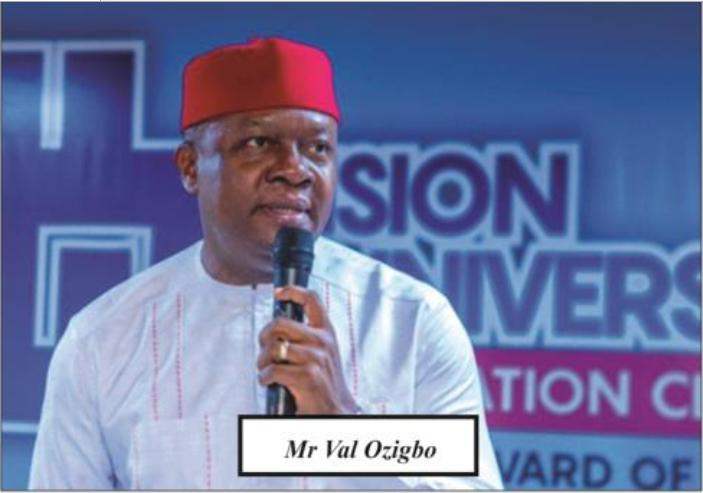 According to Sogbesan, the leadership of the Onitsha Business School selected Mr Ozigbo for recognition because of ‘his towering achievements in the Nigerian business landscape and his unwavering support for the business school.’

Professor Sogbesan further eulogised Ozigbo for his simplicity, humility, and carriage, describing him as a model citizen, accomplished corporate titan, and a selfless individual who embodied the qualities of a nation builder.

Ozigbo, who was voted as the 2021 Anambra Man of the Year, thanked the Governing Council of the Onitsha Business School for the honour, promising to continue to partner with the school.

‘I am fascinated by this because Onitsha is seen as the epicentre of business in West Africa. Onitsha is also home to the biggest market in Nigeria; so the location of this business school is perfect,’ Ozigbo said.

‘I have co-authored a book with an Associate Professor at the Lagos Business School, Prof Ogechi Adeola, of Pan-African University. Ígba-Boi, our book, is a business research book that examines the Igbo apprenticeship system.

‘Our book will be launched soon and I will be partnering with the Onitsha Business School on that project. Throughout my life, I have lived by the principles of compassion, community, and continuous improvement. We must work together to meet the challenges of our time.

‘I believe that if we adopt the culture of continuous improvement in developing and upscaling the Igba-Boi system, Ndi Igbo and Nigerians will overtake many countries,’ Ozigbo added.

He also announced Professor Sogbesan as the book launch’s committee chairman and also congratulated the graduands. One of them is Ozigbo’s brother-in-law, Ichie Sunday Ezeobiora, one of West Africa’s most successful agri-businessmen, and the Chairman of Sunchi Farms.

He said the school’s leadership had considered him worthy of having a research institute named after him and noted that he did not take the recognition for granted.

‘I spoke of my plans to revolutionize the Igba-boi apprenticeship system and ensure that it becomes a viable means of sustainable financial emancipation that we can showcase and export.

‘We can quickly achieve this by building a proper ecosystem which entails assembling key stakeholders, defining their roles, setting key performance indicators and practical appraisal modules, and monitoring progress.

‘I firmly believe in rewriting our story and to achieve this, we have to raise our collective consciousness,’ Ozigbo added.

Ozigbo is the immediate past President and Group Chief Executive Officer of Transcorp Plc, one of Africa’s most prominent conglomerates interested in hospitality, agribusiness, power, energy, and oil and gas.

In 2020 when he turned 50, Ozigbo resigned from his position at Transcorp Plc to focus on the next phase of his life, which he has dedicated to public service.

In Ozigbo’s first foray into politics, he contested for the office of governor of Anambra State in which he came second.