A middle-aged man died while another sustained serious injury in a fatal multiple crash in the popular Upper Iweka area of Onitsha, Anambra State.

The crash, which occurred on Tuesday evening, involved two Mercedes trucks and Mitsubishi L300 bus with 15 persons on board.

The Nation gathered that the accident was caused by over speeding and loss of control.

Sector Commander, Federal Road Safety Corps (FRSC), Mr. Adeoye Irelewuyi, who confirmed the incident, said the body of the deceased had been deposited at the morgue after being confirmed dead by the doctor. 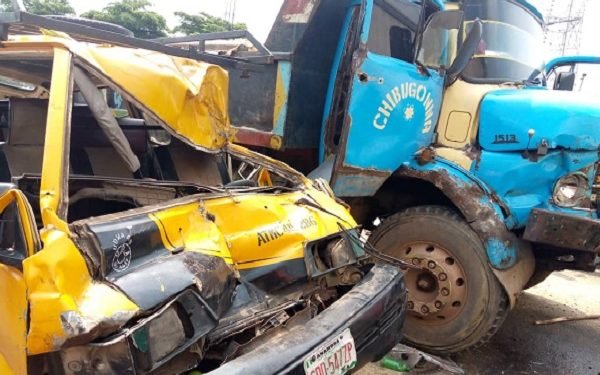 While condoling with the deceased family and praying for accelerated recovery of the injured, Irelewuyi advised motorists to desist from speeding as they consider other road users while driving.

“Fifteen persons were involved in the crash comprising 10 Male adults 5 female adults. one male adult and one female adult sustained varying degrees of injury and were taken to an undisclosed hospital by a good Samaritan.

“While a yet to be identified male adult was taken to Toronto hospital by FRSC rescue team from Upper Iweka Outpost, and he was confirmed dead by the doctor on duty and his body deposited at the Morgue.”