One Chance, Last Chance and the Season of Anomie

A colleague of mine, name withheld, boarded a shuttle bus somewhere in Onitsha one late evening after attending a function. The last thing he remembered was boarding the shuttle. By the time he returned to his senses the next morning, he found himself lying by the roadside and realized that his money, phone and other possessions had gone. While he lay on the road, the night rain had fallen on him without him knowing. It was only when he stirred in the morning that people around the area started to shout that ‘the man is still alive o’. My colleague would later tell me that those who were shouting said they saw when he was thrown off the shuttle bus and when they came and saw him lying very still they thought he had died. He may have lost his possessions and money but he is glad to still be alive among the living.

The story above is one I’m sure that many of you must have been regularly reading about how some people fall victim to hoodlums. It is not often that some make it alive. Once under the influence of whatever makes them lose consciousness, victims have often found themselves far from where they boarded their vehicles. There was a case where some passengers boarded a bus at Opi Junction in Nsukka to go into Nsukka Town only to find themselves in another state. They were only saved because of the vigilance of some policemen at a checkpoint who suspected foul play when they saw all the passengers sleeping and not able to come down for a search when ordered to. The policemen forced the driver to shake them after the policemen failed to wake them up. It was only when the driver shook them that they started coming to their senses and that was when the cat was let out of the bag during police interrogation.

Like my colleague, these ones were also lucky and we heard their story because they lived to tell it.

We are in a season when many Nigerians are desperate to make money to return to their villages and show off. It doesn’t matter to them how they make it insofar as they get what they want. 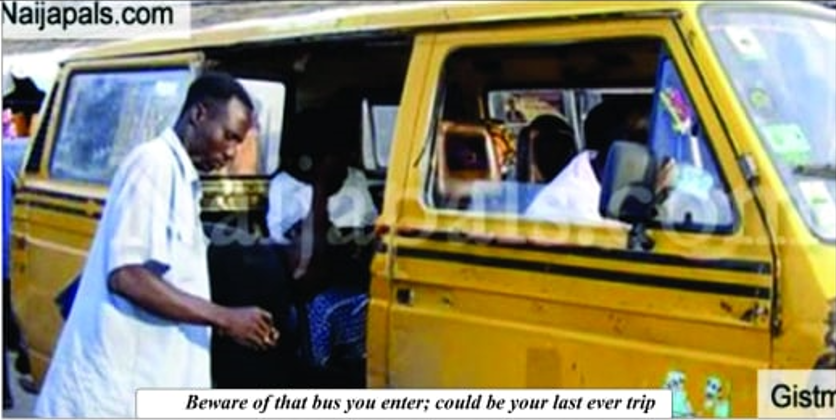 Sadly enough, we live in a society which only looks at the surface of things. Once anyone is perceived as having ”made it”, society will swoop on them with invitations to events, offers of honorary awards and chieftaincy titles. No questions are asked about the backgrounds of these people. And because of this many more youths are falling over themselves to ”make it” too and so the vicious cycle continues.

This is December, a month in which we should ordinarily be doing charitable acts to humanity, but which we have instead chosen to celebrate inanities. It is a month when ritualists, kidnappers, armed robbers and fraudsters are on the prowl, looking for the unwary. As they search for victims, may God stop them in their tracks so that they will face justice. But woe betide that community, those groups and all those who glorify these devils just because of money.

We should be wary of the vehicle we enter; be it commercial or private, to avoid a one way trip to the land of no return.

The World at China’s Feet, the World on Nigeria’s Head

When I look at how other countries of the world are progressing because they have good leaders I always shudder at Nigeria’s refusal to emulate them. Indeed, while other countries bring forth their best players, we bring our worst and yet we expect to see positive changes. Look at the Chinese, for instance. They have come from virtually nowhere to occupy a top position in the world of technology by years of careful planning, positive scheming and genuine hard work. But here, we are occupied by such trifling matters as creating grazing routes for cattle and arguing whether or not our girls should be wearing hijab to school. The result? Others have left us far behind.

I came upon this piece below about how China has come and I can only shake my head in shame when I remember how low we have descended. No be juju be that?

10 ways China is quietly working behind the scenes at the Qatar World Cup:

One: World cup buildings are getting green electricity from a next generation power station which harvests only solar energy built by the Power Construction Corporation of China.

Two: People are taken where they need to go in a fleet of 888 fully electric buses, made by Yutong Bus, a Chinese firm that has quietly become, as far as I can tell, the world’s biggest bus maker.

Three: The main stadium was built by China Railway Construction Corporation: that’s the firm that pops up in Africa and Europe and around the planet, known for its extraordinary ability to create infrastructure in difficult environments.

Four: What’s a sporting event without souvenir merchandise? It’s estimated that almost 70 per cent of World Cup related goods, from footballs to flags to jerseys to whistles, came from a single location in China, a southeastern city called Yiwu.

Five: A purpose-built extra-large reservoir is providing clean drinking water for sports people and fans. It was constructed by Gezhouba Group, from Wuhan.

Six: The stadium-building operations needed huge amounts of heavy equipment, from massive earth movers to cranes – nearly 100 of these were supplied by China’s Sany Heavy Industry, one of the world’s biggest construction firms.

Seven: The most innovative venue is Qatar’s Stadium 974, which can be disassembled and reassembled anywhere. Designed by a Spanish architect, the 974 building blocks were made by China International Marine Containers.

Eight: Notice all the LED floodlights everywhere? They come from the Unilumin Group of China.

Nine: Most people say air conditioners are a must for survival in that environment – and China’s Midea Co supplied 2,500 aircons for the event.

Ten: Last but not least, this is the most expensive sporting event in world history, and needed a lot of support from businesses. Nineteen China firms signed up to sponsor the Qatar 2022.

Point is: China is gradually turning the world into a round leather objecta and I add, Nigeria is heading speedily back into the Stone Age.