It was a relief for the people of Omor and Umuerum Communities of Ayamelum Local Area of Anambra State following the awarding of contract to Messrs Obueri for the construction of erosion control works at Omor-Umuerum Road.

The road project under the Lower Anambra Irrigation Project in Ayamelum LGA, was attracted through the member representing Oyi/Ayamelum Federal Constituency and handed over to the contractor by the Department of Irrigation and Drainage, Federal Ministry of Water Resources, at the project site on Saturday August 7.

Fides gathered that the road serves as the only access route into Umureum Community and has been in bad condition for over 20 decades following the failure of the communal palliative works, leading to the present situation where it is being threatened by gully erosion.

Delivering a speech, the Acting Director, Irrigation and Drainage, Federal Ministry of Water Resources, Engr. E. O. Oluniyi, disclosed that the site hand-over ceremony would kick-start the contract implementation for construction of erosion control works at Omor-Umuerum Road under the Lower Anambra Irrigation Project, noting that the contract was awarded to Messrs Obueri in May 2021 by the Federal Government through her department. 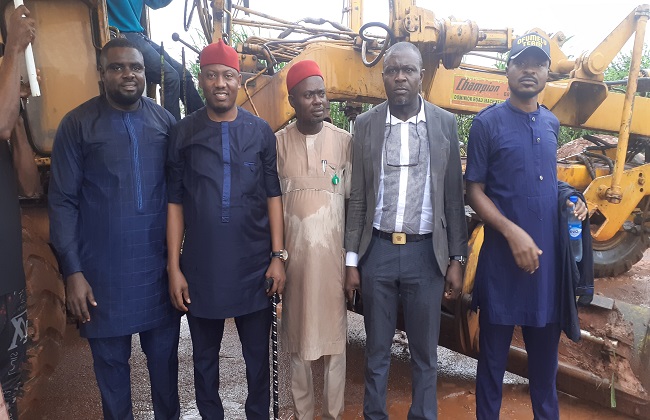 Oluniyi, who was represented by the Project Manager, Engr. Adeniran Oluwaseyi, explained that the Lower Anambra Irrigation Project (LAIP) was conceptualized in 1973 sequel to the study for possible development of the entire gamut of Anambra River Area, covering a gross area of 100,000 hectares. She stated that out of the seven irrigation projects identified by the study, LAIP was among the two that were given top priority for development due to the envisaged boost to socio-economic activities.

Oluwaseyi revealed that the LAIP project commenced and irrigation activity continued for about two decades until 2004 without any significant rehabilitation work on the road, thereby leading to rapid deterioration of the project which contributed enormously to the production of rice and socio-economic development of the rural communities within the project area.

He expressed optimism that the 2.5km road which takes off from the east end of Umuerum Junction through the north east to Omor Junction, when completed, would serve as access road to the farms, linking Omor and Umuerum agrarian communities, widely known for cultivating the popular Anambra Rice.

‘The Omor-Umuerum Road takes off from the east end of Umuerum Junction through north east direction to Omor junction. This stretch of about 2.5kms traverses through Anyamelum Local Government Area of Anambra State with a terrain relatively flat on short grade with no notice of undulation and vegetation moderately dense with medium girth trees, shrubs and tall grasses growing within the right of way.

‘The road when completed will serve as a farm access road, linking Omor and Umuerum agrarian communities in Ayamelum Local Government Area of Anambra State, who are widely known for cultivating the popular Anambra Rice (Adarice) and thus, the only major route through which agricultural produce from this large irrigation project could be easily transported or moved to the neighboring markets for household use,’ he stated.

Oluwaseyi assured the people that the Federal Government, as a result of its commitment towards the actualization of the project, would make funds regularly available and maintained that total success could only be achieved through the cooperation of the host communities.

He said that the handover of the project to Messrs Obueri Construction Limited for implementation would complement their effort of bringing the glory of the Lower Anambra Irrigation Project back to its level. He beckoned on the framers within the environs to get fully engaged in irrigation farming currently under rehabilitation in order to boost food production, open up avenue for employment creation and generate wealth which would in turn assist in poverty alleviation.

He called on the farmers and the entire community, whom he described as the would-be beneficiaries of the project, to see the project as their own and do all within their ambit to protect the project for its completion in due time.

He solicited for the unalloyed cooperation and commitment of the Omor and Umuerum people towards the realization of the project, saying that the project would be completed within few months.

On security issues, he enjoined the community leaders to sure that security was beefed up around the project by engaging vigilante groups to avoid harassment to the workers on site.

The project manager guaranteed that the contractor would deploy all required to deliver quality work in accordance to designed technical specifications, cost and time as scheduled.

He disclosed that the member representing Oyi/Ayamelum Federal Constituency, Hon. Vincent Ofumere, was greatly instrumental, supportive and committed to the initiation and successful realization of the project.

Speaking at the event, the member representing Oyi/Ayamelum Federal Constituency, Hon Vincent Ofumere, while disclosing some road projects he had attracted in the area, said that the 2.5 kilometer road construction being handed over to Messer Obueri Construction Limited, upon completion would be increased with another 1.5 kilometers which would be executed with his personal allowances.

He expressed happiness that the presence of the team from the Federal Ministry of Water Resources would help the communities have first information on the length of kilogrammes to be covered and urged them to monitor the project squarely to ensure that the contractor did not compromise in any form.

He assured the people that all the projects flagged off within his tenure would be completed, noting that no abandoned project would be associated with him on the expiration of his tenure as a house member.

He stated that the process of electrifying the area was ongoing as those to handle the project left the community four days back after the necessary paper works and signing of relevant documents, saying that 100 million Naira had been put in the 2021 budget for electrification, as scoping had been completed. He said paper work for the flag-off of another road at Njeteaboogu would be ready in no distant time.

Hon. Ofumelu thanked God for making the project a reality saying that the project was one which the people had been clamouring for, noting most aged people in the community had not seen a tarred road till he assumed representation of the area.

He said that the partnership which he had with the Ministry of Water Resources would yield the desired fruits as they had demonstrated readiness by mobilizing the contractor with 30 percent of the project sum to see to the timely execution.

He said the quality of the Ministry’s specification and bill of quantity would guarantee quality standard which had no comparison and charged the indigenes of the communities to assist in monitoring the contractor, even though he assured that the contractor had been known for delivering good quality works.

He said that provision for potable water was ongoing through Anambra Imo River Basin, noting that 70 million Naira had been mapped out for communities in Ayamelum.

Speaking to Journalists, the Managing Director of Messrs Obueri Construction Limited, Engr. Emmanuel Okechukwu, said they were fully ready to execute the project and explained that the construction outfit, in line with its mantra, would deliver quality, durable and time bound work.

He maintained that equipment for the construction of the road would be brought to the project site the next day and noted that the project would be completed within four months as against the six months specification which the company was given.

Also speaking, the Traditional Ruler of Umerum Community, Igwe Christopher Ndibe, while commending the efforts of the House member in attracting development to the area, said the road, when completed, would boost the socio-economic activities of the area, saying that movement in and out of the Community would no longer be a nightmare.

His counterpart in Igbakwu Community, Igwe Prof. Nwuneli, described the road project as laudable, noting that Ayamelum was greatly blessed and noted that the potentials within the area would assist in positioning Anambra State among economically viable sates in Nigeria.

Contributing, the President General of Umerum Town Union, Rev. Onuorah Ebubechukwu, noted that the day’s event marked a milestone in the life process of Umerum Community as it reflected another giant stride in the development of the people.

He pledged that the community would continually partner with the house member and assist him in building the transformative positive changed desired in the area. He called for the speedy electrification of the area, saying that it would open up the area and attract more business prospects for people in the area.

Adding his voice, the member representing Oyi Constituency in the State House of Assembly, Hon. Charles Obinwa, said he was on ground to witness the handover of the 2.5km road, saying that Hon. Ofumelu must have fought doggedly to attract such a project.

For his part, the former Council Chairman of Oyi LGA, Hon. Oseloka Iluzo, lauded the project. He said the house member was a worthy son and a true representative who had the welfare of the masses at heart.

He disclosed that the member had previously attracted some road projects and schools, both in Ayamelum and Oyi, and said he was worthy of commendation.

An Indigene of Njete Community, Chief Edwin Aghadinulo, said effective representation was all about attracting projects to better the lives of the people who gave them the mandate for the representation. He said that the project upon completion would not only assist in evacuation of foodstuffs from the agrarian community, but would ease transportation.