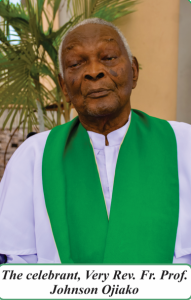 The celebrant who is a native of Adazi-Nnukwu, in Anaocha L.G.A., Anambra State, is a seasoned theologian. During the Nigerian Civil War, he worked with Caritas International to provide relief to war victims. Rev. Fr. Ojiako taught seminarians and lectured at the University of Nigeria, Nsukka. Additionally, he served in various administrative positions and parishes before retiring to the Priests’ Welfare Home, Awka.

During the homily at the concelebrated Mass, Rev. Fr. Chuma J. Anyaka, the 2nd oldest Catholic priest in Awka Diocese, extolled what he described as the exceptional attributes of the celebrant. He noted that they had first met 66 years ago at Bigard Memorial Seminary, Enugu and went on to describe Rev. Fr. Ojiako as innovative, disciplined, friendly, and highly cerebral.

Pointing out his passion for music, he added that the celebrant had birthed the initiative for the founding of the Congregation of Daughters of Divine Love (DDL), as well as the Christian Service Association, and the Christian Mothers’ Association under the umbrella of the Catholic Women’s Organisation.

He explained that the Christian Service Association was dedicated to charity and the sanctifying mission of the Church, while the Christian Mothers’ Association recognized women married validly in the Catholic Church who raised and maintained Christian families.

Furthermore, Rev. Fr. Anyaka greatly commended what he called the celebrant’s non-traditional outlook and his Christo-centric approach to his priestly ministry. He said that Karl Rahner, a German Jesuit priest and theologian, was a major influence on his life, having mentored him at the University of Innsbruck, Austria. 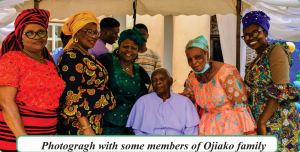 Rev. Fr. Johnson Ojiako, speaking during the Mass, expressed gratitude to the priests, religious, and all present for honouring him in a magnificent way.

He pointed out that his greatest calling as a priest was to teach and continued by defining Christianity as a personal relationship between one and one’s God. He acknowledged the need for one to effectively use the categories of one’s brain and concluded by noting that life occurred in stages.

For his part, the Catholic Bishop of Awka Diocese, Most Rev. Dr. Paulinus Ezeokafor, who was unavoidably absent, commended Rev. Fr. Ojiako for his contributions to the growth of faith in the Diocese and in the lives he had touched in his 57 years as a priest. He prayed for God’s abundant blessings on him.

Mrs. Mitchell Onugbolu spoke on behalf of Adazi-Nnukwu women while Hon. Justice Celine Nweke analysed ‘the admirable life of the celebrant. Rev. Fr. Melchizedek Obi also presented a poem in honour of Rev. Fr. Ojiako titled “The Grace Record”, based on the fact that he had crossed the biblical life expectancy of 70 years and 80 for the strong.

Rev. Fr. Uduh thanked all for their constant support and for their sacrifices towards celebrating the celebrant whom, he described as a colossus; even as he eulogised the celebrant and prayed that he remained in good health.

Other highlights included the cutting of the cake, presentation of gifts, and performances by the parish’s Block Rosary Crusade. 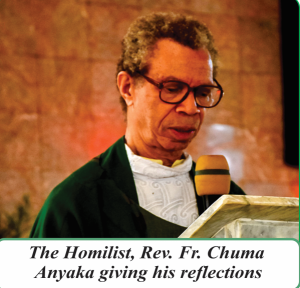 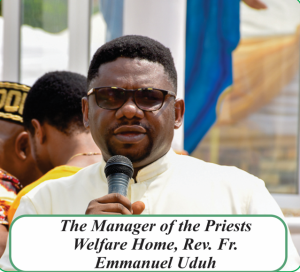