The Catholic Bishop of Awka Diocese, His Lordship Most Reverend Paulinus Ezeokafor, has described the creation of the Bishop of the Catholic Diocese of Ekwulobia (CADEK) as His Eminence, Peter Ebere Cardinal Okpaleke, on the 27 August 2022 in faraway Rome, Italy, as divinely ordained and arranged.

Bishop Ezeokafor who stated this while congratulating the latest Cardinal, said he (Okpaleke) remained a shining light not only to the Universal Church in Nigeria, but to also the Mother Church in general.

‘I am highly delighted. I am happy for Peter Cardinal Okpaleke on the occasion of his creation as a new Cardinal by His Holiness, Pope Francis, at a Consistory in Rome, Italy.

‘On behalf of the entire priests, religious and laity of the Catholic Diocese of Awka, I say big çongratulations to the newest Cardinal. We will continue to pray for him.

‘We are happy for the newly created Peter Cardinal Ebere Okpaleke after he received the red hat from Pope Francis in Rome. It calls for constant prayers,’ Bishop Ezeokafor said. 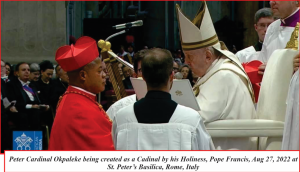 The creation of Peter Ebere Cardinal Okpaleke, Fides understands, is seen as a great testimony of the working of the Holy Spirit among the faithful. He is a bishop of the youngest diocese, barely two years old as a diocese. He, the Cardinal, chose the motto: Veni Sancte Spiritus (Come Holy Spirit) when appointed a Bishop. Accordingly, by the divine plan, he was announced a Cardinal in the Novena week in preparation for the great Pentecost.

Meanwhile, congratulations have continued to pour in following the creation of Okpaleke as a Cardinal, with both Gov Chukwuma Soludo of Anambra State and the presidential candidate of Labour Party, Peter Obi, being among the first to do so. Both men were present at the event in Rome.

In his congratulatory message to Cardinal Okpaleke, Obi described him as a huge blessing to not just the Church in Nigeria, but the Universal Church. Obi stated that Okpaleke’s virtues of patience, understanding and wide perspectives on issues, remained some of the valuable assets that had continued to propel him in his priestly vocation.

‘By this ecclesiastical function, you have thus become a fully fledged Prince of the Universal Church,’ Obi noted.

Obi praised what he called Okpaleke’s exemplary conduct, both as teacher, priest, administrator and bishop, saying that he had gathered great experiences to help him in his new office.

Obi said, ‘Your priestly vocation has thus far been defined by exemplary conduct, deep spirituality and the admirable quality of allowing God’s purpose to unfold in your life. Your maturity and circumspection in crisis management are apposite for any higher managerial responsibility.

‘With your rich background in relating with people and building institutions, we have no doubt that you will bring your vast knowledge and experience to bear in your new position as a Cardinal which has effectively placed you in the first position among active clergies of the country.’ 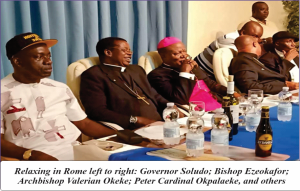 Addressing journalists after the event at St Peter’s Basilica Rome, Obi said he was happy with the number of Nigerians, cutting across regions and religions, who came to identify with another Nigerian on a great occasion. He said that such spirit of love and unity was very characteristic of Nigerians.

The former Anambra governor said that such spirit of oneness, which, he said, transcended tribe, was highly needed in Nigeria’s political space, especially now the country had been badly wounded by the collective effect of bad leadership.

The Governor of Anambra State, Prof. Charles Soludo, for his part, expressed joy that one of the newly Cardinals was a Nigerian and from Anambra, specifically. He said that such was worthy of emulation, especially now the state was set to regain its pride of place.