By Mercy Hill and Isdore Ndubuisi

The family of Chief Stephen O. Okonkwo Ezeani, on 28 May 2022 laid to mother earth the remains of their late mother, wife and grandmother, late EzinneMrs Paulina Nwanyioye Okonkwo Ezeani who was born 28 May 1947died 15 March 2022.

The funeral ceremonies which took place at her country home in Umuebo-Ajani village in Ichida, Anaocha L.G.A in Anambra State, on 27and 28 of May 2022, attracted people from various walks of life who came to pay their last respect to the deceased.

The principal celebrant at the vigil Mass ,27 May 2022, and the Catholic Bishop of Nnewi Diocese, Most Rev. Jonas Benson Okoye, called on all to pray for the repose of the deceased in the Lord, and for safety for all who attended the vigil Mass.

In his homily, held on the 27 May 2022, the former Chancellor of the Diocese, Rev. Fr Francis Chidume called for prayers her repose, her family for the Christian community. He recalled the celebration of her 50th wedding anniversary last December saying that her life style while she was alive showed she was a great Christian woman. She said her life was an example of

how people should prepare for what would help them go to heaven by living a truthful life imbued with forgiveness, help to people and presenting oneself to God.

The burial Mass, at St. Theresa’s parish, Ichida, 28 May 2022, was presided over by the Catholic Bishop of Awka, Most Rev. Paulinus Ezeokafor. Delivering the homily, the Bishop spoke on the need to prepare for heaven by goodness of our lives, prayer and sacrifice for the good of others. He harped on the new trend of return to idolatry, and charms, especially among the youths as a sign of depreciation of Christian values in the lives of our people. 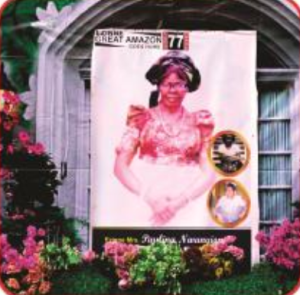 He was concerned about the trends of things in Nigeria manifesting themselves in hardships, separatist tendencies, banditry, kidnapping and other forms of insecurity. He was worried that there seemed to be two key things that tended to encourage many of the recent barbaric ways people are killed. He fingered hard drugs and new flavour in charms as the two

On his part, the husband of the deceased, Chief Stephen Okonkwo Ezeani(Ezeani Ezechiedo) noted that he had accepted the death of his wife, and encouraged his

children to be strong. He explained that he was part of the burial preparations and was able to console himself and his children,reminding them what to do to make the burial successful.

When asked how his father was faring owing to the mother’s death, the priest son of the deceased, Rev Fr Paulinus Okonkwor who is theFinancial Administrator of the Catholic Diocese of Awka,told Fdes that their father was a man who had faith and trust in God. He explained that he never joked with the things of God, Catholic faith, and her teachings.”He even preaches to us, his children,to always be strong”, Fr Okonkworsaid.

He went further to say that the family had committed everything into the hands of God, explaining that death was not the end of man but the transition to eternity. ”God is the owner of life; he creates and calls back anytime he wants. Who are we to question God and debate with him about our life’, he concluded. 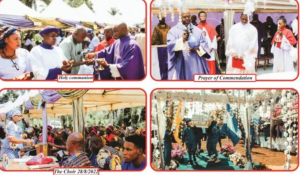 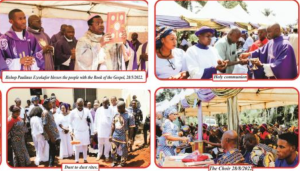 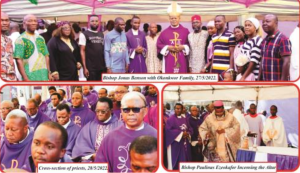