It was a celebration of unending love for Mr. Alexander and Mrs. Helen Okoli, who attained the golden age as husband and wife after overcoming the numerous challenges that posed threat to their union.

The celebration which was held on Monday, January 4, at their home compound in Oko, Orumba North LGA, Anambra State attracted family, friends and dignitaries from all walks of life who gathered to celebrate the Golden Jubilee Wedding Anniversary of the ideal couple.

Fides gathered through the free speeches made by some of the invited guest, that the couples could be described as ideal by following the mentorship which most young couples had received through them and their willingness to caution erring couples for effective Child upbringing. 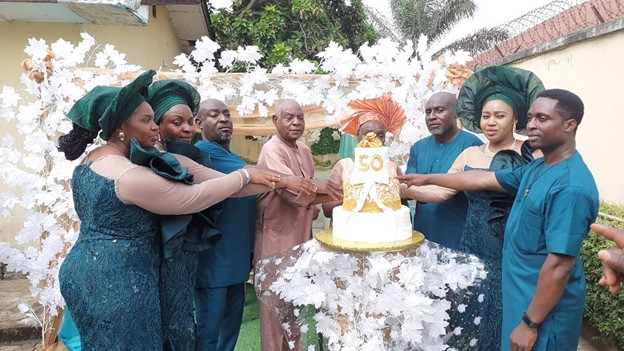 The celebration of the marital bliss which has stood the taste of time, commenced with a concelebrated Eucharistic celebration led by the auxiliary bishop of the Catholic Diocese of Awka, Most Rev. Jonas Benson Okoye at St. Theresa’s Catholic Church, Oko.

Leading in the Eucharistic Celebration, Bishop Okoye enjoined the celebrant to be consistent in their love towards each other which he said was the main reason why they attained the golden age of 50 in their marriage, saying that intending and younger couples needed to understudy the celebrant, to have a more effective understanding of what patience entailed in marriage.

He noted that marriage was not a bed of roses but union that requires understanding and commitment by both parties to ensure its success. He described love as the meaning of marriage, calling on all to adopt the virtue in their respective homes.

Speaking to Fides, Mrs. Okoli, revealed that their marriage had its ups and down at various points, saying that God was instrumental to the success which they had recorded as a husband and wife for the past 50 years. She noted that their marriage was extraordinary, as it was rooted in prayer, understanding, love and mutual respect for one another.

The celebrant called on young couple to develop patience and endurance, noting that marriage was good but not always sweet as it looked from the outside. She maintained that it was important for young couple to seek the true meaning of marriage before going into it and appreciated God for his presence, wealth, children and gift of friends which added taste to their marriage.

She stressed the need for people to adopt a straightforward life style, noting that it would attract favours to such a person both from God and man. She said that God’s grace was instrumental to the good old age they are enjoying.

Adding his voice, Mr. Okoli, popularly known by friends and acquaintances as Zaga, said he was particularly happy celebrating the Golden Jubilee because he never anticipated that such a day would be possible, noting that most of the people whom they wedded at same time with cannot celebrate 50 years in marriage as either wife or husband had died.

He recalled how he started the marriage journey with his wife and praised God for giving them the wisdom and understanding used in tackling marriage difficulties, saying that marriage was a journey one must start with God’s guidance and direction.