It was indeed a celebration of an impactful and fulfilled life lived by the late Christopher Okeke Mbala by the children, relatives and entire Awgbu Community, as the remains of the late Patriarch were laid to rest in his country home at Abor-Ani Village, Awgu, Orumba North LGA, Anambra, last Wednesday, October 27.

The celebration of life which was accorded to the deceased as a result of his undoubted faith in God and philanthropic gesture which he used to touch the lives of many within the community, commenced with a Eucharistic celebration led by the Catholic Bishop of Awka Diocese, His Lordship, Most. Rev. Paulinus Ezeokafor, at St. Mary’s Catholic Parish, Maryland, Awgbu.

The late Sir. Christopher Okeke Mbala, popularly known by close acquaintances as Mmaduabuchi, B.S 10, 10, died at the age of 82 years after an illness that lasted for about three days. He was an ardent member of various organization in the Catholic Church till his death.

The late Okeke Mbala was eulogized by his family members, admirers and community members as a courageous man, a disciplinarian per excellence, an honest man, and a prayerful individual with an amazing faith in God who made his marks in the service of God and humanity.

Through some testimonies and comments made by people who came to condole with the deceased family at the burial ceremony, Fides gathered that the deceased was responsible for the success which the brothers, children and others within the community have recorded in their various chosen professions following the training he imbued in them and was described by many as a living saint. 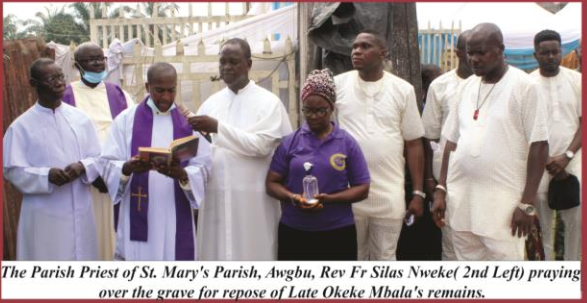 In his homily, Bishop Ezeokafor reminded Christians of the need for them to do good, as that was what they would be remembered for after their earthly sojourn and advised them to ensure that they impacted lives positively.

He noted that the deceased was committed to the growth of the Church and humanity, recalling that he assisted the diocese in training a priest during the seminary. He urged the congregation to be mindful of the judgment day as there would be reward for every work, noting that whatever a man sowed, that he would reap.

Speaking after the burial Mass, the deceased’s younger brother, Chief Kenneth Mbala, described the deceased as his father as he played a fatherly role and trained them academically after the demise of their father. He likened his late brother as a practical Christian who had unwavering faith in God, saying that he had demonstrated such faith countless times while alive. He thanked Bishop Ezeokafor and all who commiserated with the family. 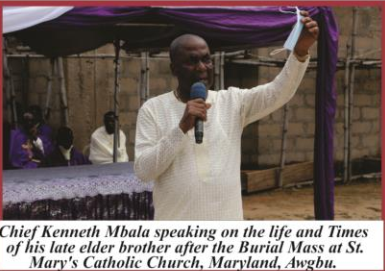 For their part, the first son and first daughter of the deceased, Mr. Emenike Mbala and Mrs. Ebelechukwu Omaife, said their father was a committed Christian, a man of truth and peace who united his children, among others, with love and promised to sustain the legacies which their father left behind.

Contributing, the deceased’s kinsman and the former Vice President General of Awgbu Progressive Union, Hon. Dike Ozulumba, described the deceased as an upright and peace loving man known for his benevolence to the members of the community and beyond, urging the children to toe the path of their father.

The burial ceremony witnessed heavy presence of members of the Catholic Men’s Organization from Awka Diocese, among other groups.