The family of the late Ichie Edward Nwoye Okeke (Ichie Ozocha na Nawgu) of Ifiteora, Nawgu last Thursday, 31st March, laid to rest, their father who passed on in January, 2022.

Speaking at a concelebrated funeral Mass held at his residence, the Catholic Bishop of Awka Diocese, Most Reverend Paulinus C. Ezeokafor, admonished all to be mindful of their actions in life as all was vanity.

‘All our struggles are vanity; therefore, in life’s struggles, we must put heaven in mind first; because, whether we like it or not,

we must all die someday. It’s unfortunate that some people don’t believe there’s hell. If you don’t know, hell is real. The story of Lazarus and the rich man teaches us that there’s no time for regret in hell. Therefore let us endeavour to live life well,’ Bishop Ezeokafor said. 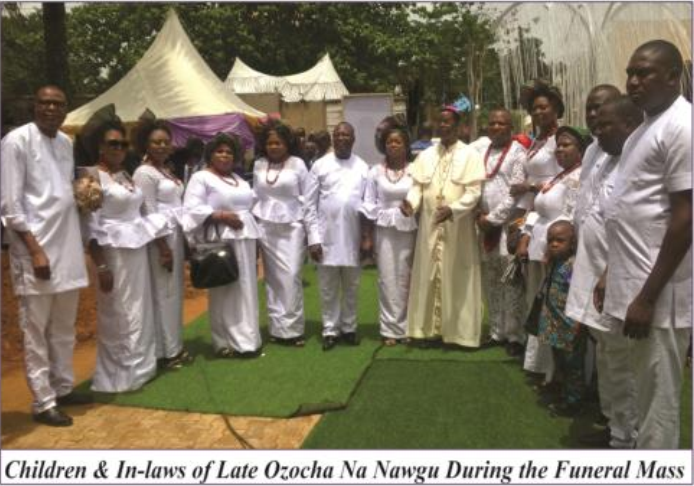 The Bishop also extolled the virtues of the late Chief Okeke as a teacher, worthy of emulation.  ‘Teaching is not a profession, rather it is a vocation. Sustainability is important as we all know the role of teachers in nation building can’t be overemphasised. I encourage you

teachers not to relent in training their subjects.

‘What is striking about him is that he would save his allowances to buy things for widows during Christmas every year. Money doesn’t elongate life but healthy living does,’ the Catholic prelate said, while appreciating the children for the befitting living the late Ichie enjoyed. He prayed God to sustain and reward them, even as he thanked God for making the deceased attain 96 years. The Bishop prayed God to grant him eternal rest.

On behalf of the family, Mr. Ikechukwu Okeke, eldest son of the bereaved family, thanked the Bishop, the priests, religious, lay faithful and all guests for their presence and prayers, describing his father as a peaceful, loving and truthful father who was fun to be with.

The twin brother of Mr. Ikechukwu Okeke, Mr. Michael Okeke, who also spoke to Fides after the Mass, said he missed numerous virtues about the patriarch, especially his kindness, faith and ready smile. He described him as a man of the people who always wanted to make people happy.

‘I was at work when I got the news. I was saddened and could not continue with work for the day.

He was a peace maker. We never knew he would depart so soon,’ he said.

The eldest daughter of the late Chief Okeke, Mrs. Jane Ngozika Nwaorji, described his late father as a well-known individual who was known for his good deeds.

‘If you look around, you will see the number of priests and religious here present; even from the Anglican Communion. That speaks a lot about his personality. He lived a life worthy of emulation, just that I didn’t know I would lose both parents within a year. I will really miss their advice,’ she said.

Meanwhile, one of the daughters-in-law of the late Ichie Okeke, Mrs. Ifeoma Okeke, said her first encounter with him in 2001 showed her that was going to be a good father in-law.

‘He prayed for us and prayed a lot. When he came to the United States he would recite 20 decades of the rosary and he taught my children how to speak the Igbo Language. We are thankful for his life. He was a teacher and also departed this world as a teacher,’ Ifeoma said.

The last son of the deceased, Mr. Victor Okeke, appreciated God for a life well spent on earth by his father, while disclosing that he achieved all he wanted in life. He said his father’s

the grace of God, which, he said, was gracious enough.

‘It is not easy for one to clock 96 years of age. Today we celebrate a life well spent on earth, I feel good and happy because he achieved all he wanted in life and wish I would live beyond 96 years. I will greatly miss his fatherly love and fun we usually have, especially when he calls me White and I responded by calling him Ozocha,’ Mr Victor Okeke said.

‘He is a prayerful man and doesn’t miss the 3’o’clock Divine Mercy prayer and daily recitation of the rosary. But we cannot question God,’ Victor Okeke said.

The late Okeke was the last icon of his generation in Nawgu. He was born in 1925 as the first born child of his parents. He was a teacher and began teaching in 1945 and retired in 1984 as head master. He taught at Nsugbe, Aguleri, Umuoba Anam, Nawgu and Ndiagu Okpoto in Ishielu Local government Area.

He played prominent roles in the Catholic Church and community as a mentor, mediator and opinion influencer, Fides gathered.