The Apex Igbo Socio –Cultural Organization, Ohaneze Ndigbo has set up a acommittee that would visit the various Emirs and Obas across the country to draw support from them, to appeal to their people in the political parties to nominate Igbo candidates for the 2023 Presidential Election. The President of Anambra State Branch of Ohaneze, Chief Obi Chukwuemeka Udodeme, who spoke when a Presidential aspirant on the platform of All Progressives Grand Alliance, APGA, Professor Peter Umeadi interacted with the Leadership of Ohaneze during which he formally informed them of his aspiration, the Igbos were leaving no stone unturned to ensure that for the sake of equity and justice, the next President of Nigeria would be an Igbo. 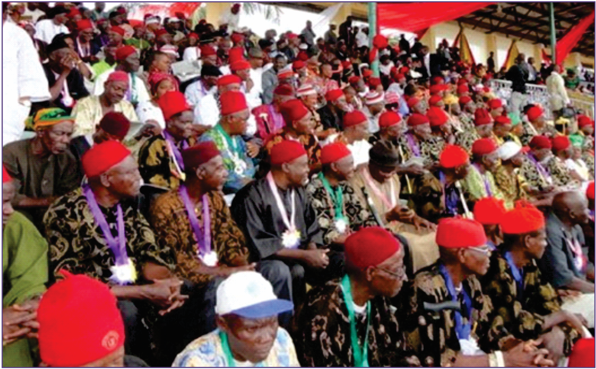 Accordding to him, the Ime Obi Ohaneze, the highest decision-, making of Ohaneze Ndigbo, would meet in Enugu on May 5th, 2022 to take far reaching decisions on the 2023 Igbo Presidency.

Chief Udodeme commended Justice Prof. Umeadi, who is the former Chief Judge of Anambra State for presenting himself to serve Nigeria at the highest level, after his meritorious service in the judiciary.

Addressing the people, Prof. Umeadi pledged to administer the country with firmness and fairness and reposition Nigeria to the path of progress, harmony and prosperity.

He said: “Uppermost in my mind is how to reconcile with ourselves across the length and breadth of our dear country, Nigeria. It is not possible for us to achieve, economic, educational, scientific, sporting or sufficiency breakthrough when we are hungry, insecure, and unstable.

“Nigerians are traumatized on daily basis from wanton killings, displacements, disorganization of business and social life with attendant difficulty to sustain economic, commercial and domestic life.

“My antecedents and mettle guide me to step out with the triple banner of the Rule of law, Separation of Powers and Due Process, which should engender security for life and property, economic revitalization and prosperity, which in itself represents a fulfilled and happy life. These issues should be in the core of our rejuvenation as a nation.

“We know that insecurity amongst other fallout have driven our people away from the farms creating artificial scarcity of food and earning power. We live with the dilemma of funding and even making long term plans on camps harboring internally displaced persons (IDP) when the country is neither at war nor struck by a major natural disaster.

“In a place like the Southeast,, it has become normal not to work on Mondays stemming from circumstances of nationhood and inclusiveness for which other channels of rapprochement are available, but are not utilized. It has long become a risk to travel by road, which now extend to sea, rail and air! People are kidnapped easily and huge ransoms are demanded and paid through established communication grid and existing financial system.

“I look forward to a Nigeria where justice would reign for all citizens equally, irrespective of tribe or status. The bulwark of my presidential bid is predicated on popular votes at the polls by a majority of Nigerians. We should respect the ballot. We should canvas and sustain free and fair elections. Let only the valid votes count.

“I hope Ohaneze Ndigbo Worldwide Anambra State chapter would remember that it has a duty to engage on vigorous voter education to ensure that all eligible voters who are 18 years and above register to vote and obtain their permanent voters cards.”